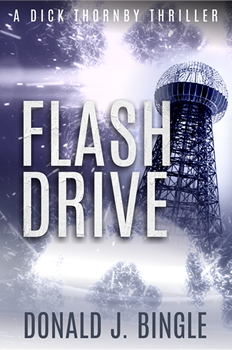 Dick Thornby is getting good at saving the world, but at the start of the third book in Donald J. Bingle’s espionage series—FLASH DRIVE—the international spy is working double time to save his actual job as a wastewater treatment consultant, and his marriage.

Neither looks promising though, when Thornby is called in by the ex-KGB head of the Subsidiary’s Internal Audit Division to investigate a bizarre web of conspiracy theories spanning decades and circling the globe. Not only does he have to work off the books, Thornby’s wife learns all about his clandestine career, putting the entire family in danger.

To keep them safe, Thornby drags his family to the Australian Outback where a mysterious flash believed to be a futurist weapon of the past has caught the attention of a sinister Japanese cult.

FLASH DRIVE builds on the universe Bingle created with Net Impact and Wet Work, taking readers on a globe-trotting quest for the truth.

In this interview with The Big Thrill, Bingle—the author of seven thrillers and more than 60 short stories—shares further insight into his thrilling new release.

First and foremost, I want my readers to enjoy their reading experience. I want them to be interested in the premise and information driving the plot, engaged by the pace, drawn into the lives of the characters presented, and satisfied by the reveals and resolutions provided. I hope that, when finished, they are so enthusiastic about some aspect or piece of what they’ve read that they just have to tell someone about that thing, whether or not they actually pass on where or how they encountered it.

The world is a bizarre and interesting place, but the websites, factoids, conspiracy theories, musings, and rants which can be found on the internet are more bizarre and fascinating than most people imagine. Each of the Dick Thornby Thrillers deals with weird things you can find online—sometimes debunking them and sometimes searching for the kernel of truth that is at the bottom of the web of conjecture and speculation.

In his rough and tumble job there are no tailored Italian suits, no bimbos eager to please, and no massive underground fortresses built by evil overlords seeking world domination—just an endless series of sinister threats to the safety and security of the billions of mundane citizens of the planet. Sure, Dick’s tough and he knows a few tricks to help him get out of a tight spot, even if his boss accuses him of over-reliance on explosives. But he’s also got a mortgage, a wife upset by his frequent absences on “business” trips, and an increasingly alienated teenage son who spends way too much time playing in gaming worlds on the computer.

Robert J. Sawyer, Michael Crichton, and Dan Brown, among many others. Each of these authors—in very, very different ways—grabs hold of pieces of research or fact that most people have never encountered or thought about and uses those scientific or historical tidbits to fashion compelling narratives which reveal the information and how it could interact with the real world.

Donald J. Bingle is the author of seven thrillers, including Forced Conversion, GREENSWORD, Frame Shop, The Love-Haight Case Files (with Jean Rabe), and the Dick Thornby Thriller Series (Net Impact, Wet Work, and Flash Drive). He’s also had more than sixty short stories published in a variety of genres, many of which tales are collected in his Writer on Demand TM series. Before he started writing, Don was the world’s top-ranked player of classic role-playing game tournaments.

More on Don and his writing can be found on his website.