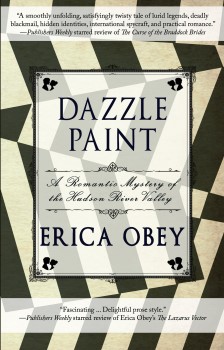 Gavin Fellowes, a damaged WWI veteran turned cynical psychic investigator, arrives in Ker-Ys, a Utopian art colony in Woodstock, NY, to investigate a series of purported fairy kidnappings of Communist garment workers who have taken over the failed Overlook Mountain House above the village. He is rapidly confronted with the willful blind spots of the well-meaning artists and the burgeoning anti-Semitism of the Catskills. With the help of Kate Ames, an illustrator and dazzlepaint designer who once might have been kidnapped by the fairies herself, Gavin must dig beneath the myth and legend to uncover an all-too-real occult threat that looms over Europe in the aftermath of the Great War.

Definitely the setting. Even though the concert didn’t happen here, Woodstock is a magical place that operates by its own rules. Although I did fictionalize some details, my main intent in writing this book was to capture Woodstock at a specific moment in space and time.

“Research” is the answer to both questions. As a former academic, I’m still a research junkie. However, as a writer, I constantly have to restrain myself from getting every single thing I know down on the page. And Woodstock is a town with a long memory, so my fact-checking had to be spot on.

I am always trying to cross genres, particularly between literary fiction and mystery fiction in the spirit of Iain Pears’ Instance of the Fingerpost. I am also interested in blurring the boundaries between mystery and fantasy, and am always trying to create mysteries that have a real as well as a possibly supernatural solution.

Erica Obey is the author of four other historical and paranormal novels, including the award-winning The Curse of the Braddock Brides. She holds a PhD in comparative literature and pursued an academic career specializing in the women folklorists of the nineteenth century before she decided she’d rather be writing the stories herself. She serves as chapter president of MWA-NY, and has previously served as the chair of the Edgars Best Novel Committee.