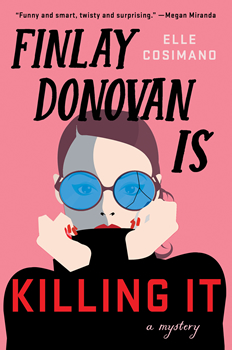 In these fraught times, sometimes we all could use a good laugh, right? Elle Cosimano’s FINLAY DONOVAN IS KILLING IT dishes out giggles, laughs, and outright guffaws in exactly the right amounts to help us escape the news of the day.

Finlay is a harried-mom fiction writer with flagging sales, an ex who is trying to take her kids away, and a contract to take out another woman’s husband for money. A lot of money. Anyone can relate, right? Except for maybe the contract-killer part.

The Big Thrill recently caught up with Finlay’s creator, Elle Cosimano, to discuss all things Finlay, as the ITW award-winning author of YA thrillers and Edgar nominee marks her debut in the adult thriller world.

“The one word I hear over and over again when people talk about Finlay is that she’s relatable,” Cosimano says. “Finlay’s voice is authentic. As a woman, a mother, and an author, her struggles and self-doubts and victories feel real, probably because I drew upon so much of myself as I was crafting her. That’s the key to pulling off an extraordinary tale with a highly unbelievable plot—we will become attached to a character we might not otherwise be drawn to if we can relate to that character on some deeper level. If we see aspects of ourselves in a flawed hero, we’re much more likely to cheer for them and stick along for the ride.”

Finlay’s troubles—how she is going to pay the electric bill, how she can persuade her nanny to return, how she can finish her book, how she can convince her ex not to take her children away—pale in comparison to what happens when a woman overhears Finlay’s restaurant conversation with her literary agent in which they discuss the murder in her manuscript. The woman assumes Finlay is a hit woman and hires her for serious money to go after the woman’s bad-guy husband. 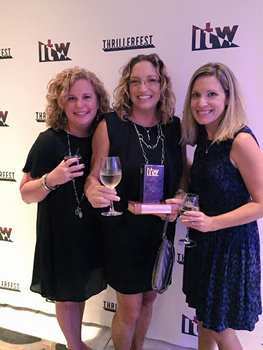 Cosimano (center) with her critique partners, Ashley Elson and Megan Miranda, at the ITW Thriller Awards in 2015.

Finlay knows she should simply throw the woman’s note away, but there are 50,000 badly needed reasons not to. “One of the things I loved most about this book was exploring that fine line between right and wrong, good and bad, role model and criminal,” Cosimano says. “These roles are rarely ever clean-cut. The most intriguing characters explore those gray (and very human) areas.”

Cosimano believes every mother she knows can connect to some aspect of Finlay. “I think that’s what makes her so deeply relatable. Unlike Finlay, I’m fortunate to have a loving, supportive partner, but the frustrations of motherhood and the highs and lows of being a struggling author all came from a very authentic place as I was writing her,” she says. “When I first came up with Finlay’s story, my husband was working a contract overseas, which often left me alone for months on end to care for and homeschool our two children. I was momming hard, teaching all day, and awake most nights struggling to meet my writing deadlines. My book sales were stagnating, and my confidence was dwindling. I was exhausted and felt undervalued, like I was being pulled in too many directions. My family was starting to ask if the sacrifices I’d made to be a writer were worth it.”

Cosimano’s own life also moved her to explore women’s friendship in this story. “Some days, a push from my devoted critique partners (who are also moms and two of my closest friends) was the only thing that kept my head above water. Their support inspired the relationship between Finlay and Vero (the nanny-turned-friend). I wanted Finlay to have that kind of ride-or-die friendship, someone she trusted enough to bury a body with.” 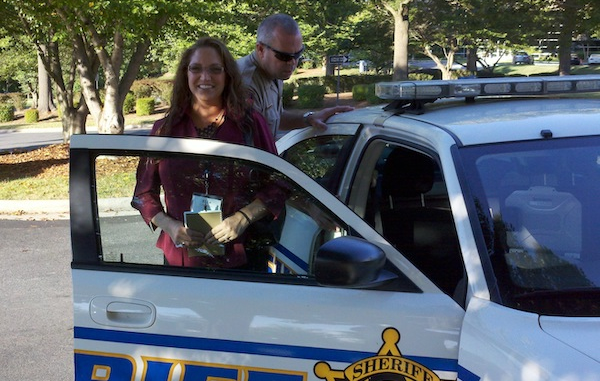 Cosimano prepares to embark on a ride-along with a deputy sheriff during the 2013 Writers’ Police Academy.

Though this is not her first book, Cosimano’s journey to writing isn’t the usual “I always knew I wanted to write” story. She discovered her passion for it during a midlife crisis.

“I had a long and successful career in real estate, two young children at home, but I knew in my heart I wasn’t doing what I wanted with my life,” she says. “Ten years ago, my mom pushed me to take a sabbatical from work to write my first book. Her support and encouragement (including watching my kids so I could make time to write) enabled me to make that leap; I couldn’t have done it without her. Now, I can’t imagine doing anything else. I love telling stories. In these COVID times, it makes me happy to know I’m bringing a little joy to my readers.”

But dark humor? “It actually felt very natural to me. Maybe because humor is such a powerful coping mechanism for dealing with stressful situations, and Finlay finds herself in many. The challenge, I think, comes in balancing it—keeping the humor authentic and appropriate, scene-by-scene. As the saying goes, there’s a time and a place for it. I was careful to preserve the tone of each scene, to maintain tension where I needed it, and relieve that tension when the moment called for a breather.” 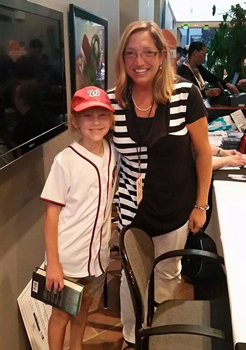 Cosimano meets one of her YA fans.

The stakes elevate the tension. “The more the character has to lose, and the greater the emotional value of that loss, the more the reader fears it. In Finlay’s case, the stakes were clear from the beginning—she was terrified of losing her children in a custody suit to her ex,” Cosimano says. “But as the story progresses, that risk of loss grows. She gains a close friend in her partner in crime, a huge milestone of her career is finally within her grasp, and she finds herself on the cusp of a blooming romantic relationship. In many ways, Finlay’s life is finally turning around, but now she’s on the brink of being arrested for murder. Not only is she faced with losing her children to her ex, she’s faced with losing them forever, along with all those other hard-won victories. As the net closes in around her, our sense of mounting tension comes from the collective value of what she stands to lose and what it represents to her.”

The stress of the pandemic and the election influenced Cosimano’s work. “What I found difficult wasn’t writing a dark story with humor but writing during dark times with humor. It was hard to maintain a sense of humor through it all, and there were times when I had to step away from the manuscript because my head was too dark to imagine anything funny. Then again, there were other times when all I wanted to do was escape into Finlay’s head. I hope the humor gives my readers that same sense of escape—a little light in a dark place.” 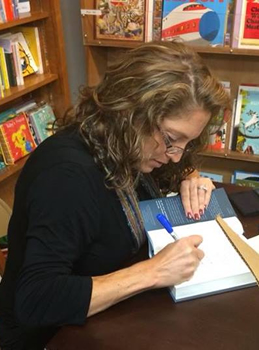 FINLAY DONOVAN IS KILLING IT has tons of twists, but the most surprising one comes at the end. “That ending was as much of a shock to me as it probably is to my readers. And I think those endings are the best—they feel real and right in that moment of the story, enough to grab me by the throat. Perfectly logical yet utterly surprising.”

Of course, we won’t tell you what that twist is—you’ll have to read it for yourself.

Next for Cosimano is her YA thriller Seasons of the Storm, coming out in paperback in May, its sequel Seasons of Chaos in hardback in June, and the next installment of Finlay’s adventures.