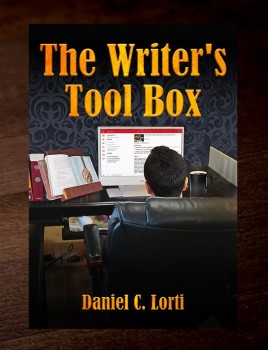 Do you want to start writing?
Are you having trouble sticking to it?
Now that it’s finished, what’s your next step?

THE WRITER’S TOOL BOX presents a clear, concise, and inclusive guide for aspiring, beginning, or accomplished writers, as well as writing consultants and instructors in all facets of the creating, sustaining, and completion of a book. It provides a step-by-step description with examples of the major phases right up to the finished manuscript. Suggestions and recommendations concerning the next phase include external review, finding an agent, and promoting your accomplishment.

The number of first-time writers who had questions regarding the writing business.

It gives a complete step-by-step explanation including examples on the total foundation of writing from beginning aspiration to the first draft and beyond.

The amount of writers who have started penning a manuscript without the basic knowledge of the craft they’re pursuing. I wanted to help them with a simple guide to every step and process they need to follow.

Actual experiences and examples encountered in my early stages were documented while I attended workshops, conferences, and meetings with other authors.

I read about 25 novels a year. Although my writings have centered around historical fiction, I don’t read that genre, preferring to stick with action-adventure thrillers. In particular, I select authors who differ from each other in their style of writing. That’s where the value of reading comes from; you borrow from their approach until you develop one of your own. That’s not to say you favor one or more for yourself. The list of authors who have influenced me is large, but they all have the quality I try to emulate, namely, engaging, compelling and repeating characters, twisted plots, and diversified writing styles. Here are a few of them: Lee Child, Clive Cussler, Tom Clancy, John Sandford, Robert B. Parker, Stuart Woods, Vince Flynn, and Dan Brown.

Daniel C. Lorti is the author of The Avignon Legacy, a historical fiction account of a missing medieval treasure, Knights of Honor and Knights in Action, sequels to The Avignon Legacy, and The Missing Factor (Winner of the Beverly Hills Book Award) and its sequel The Business End, both of which embody his professional background in outstanding suspense thrillers, and The Mulligan, a fantasy. His book THE WRITER’S TOOLBOX is pending release.

Lorti is a member of the Historical Writers of America, Mystery Writers of America, and International Thriller Writers. An aerospace engineer with sensors, weapons, and intelligence background, he was chief radar engineer for the Northrop Grumman Corporation and was on President Clinton’s twenty-member Committee for Trade and Investment in Northern Ireland. A former international arms broker, he conducted business in Europe, the Middle East, and Asia. During his career, with partners, he sold a successful aerospace company to the Northrop Grumman Corporation. He resides in Newport Coast, California.