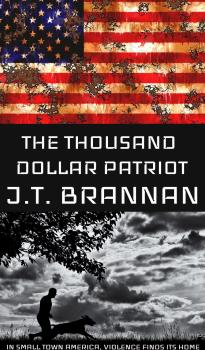 Big Sam Renton is in charge of the small town of Grafton Falls, and everybody knows it. He is the unelected mayor, and has become rich from the people who live there, controlling most of the businesses and collecting protection from the rest, voluntary contributions to the so-called “Patriot Fund”.

But one day, Colt Ryder – the Thousand Dollar Man – busts up some of Renton’s thugs in a roadhouse outside out of town, and when he is arrested by Deputy Sheriff Dwayne Franklin, the young officer – maybe the only honest man in the department – decides that instead of putting Colt in jail, he’ll make him an offer he can’t refuse.

And so Colt starts to look into the affairs of Sam Renton, and soon discovers that things in the town are even worse – and Renton even more powerful – than anyone could have believed.

THE THOUSAND DOLLAR PATRIOT is another explosive entry in the Colt Ryder series, full of action and suspense, a thrill-packed adventure that will leave you breathless.

This is the fourteenth book in the series, and so the character of Colt Ryder – a man who wanders the United States, righting wrongs for a thousand dollars at a time – is already well-established. Given the fact that he roams America – along with his loyal dog, Kane – each story features a new town or city, where the adventure takes place. For this particular novel, I developed a story centered around a small town which comes under the malign influence of a local ‘patriot,’ and I have taken an unusual step for this series and used a fictional town for the setting.

Normally, I set my novels in real places, but for this one – because the town is pretty corrupt, and I didn’t want to offend anyone! – I have invented the town of Grafton Falls, which was a challenge in terms of making it seem like a place that could actually exist. But it also presented me with a great opportunity too, to tell the story I wanted, without being constrained by actual locations and personalities.

I always like to think that my novels are like movies, but on the page. I try and generate the same sort of kinetic, visceral excitement that people get when they watch an action movie at the theater. and in our current climate, when people can’t get out to the movies, this is the perfect replacement!

J.T. Brannan is the author of the Amazon bestselling political thriller series featuring Mark Cole, the all-action Colt Ryder series, the action-adventure John Lee series, and the new Maxwell Knight crime series, as well as the high-concept thrillers Origin (translated into eight languages in over thirty territories) and Extinction (his latest all-action novel from Headline Publishing).

He is currently at work on his next novel.