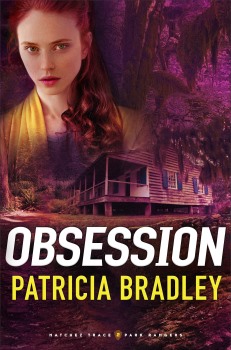 Natchez Trace Ranger and historian Emma Winters hoped never to see Sam Ryker again after she broke off her engagement to him. But when shots are fired at her at a historical landmark just off the Natchez Trace, she’s forced to work alongside Sam as the Natchez Trace law enforcement district ranger in the ensuing investigation. To complicate matters, Emma has acquired a delusional secret admirer who is determined to have her as his own. Sam is merely an obstruction, one which must be removed.

Sam knows that he has failed Emma in the past, and he doesn’t intend to let her down again. Especially since her life is on the line. As the threads of the investigation cross and tangle with their own personal history, Sam and Emma have a chance to discover the truth, not only about the victim but about what went wrong in their relationship.

From that night forward, I spent the nights I couldn’t sleep making up stories about his life. It wasn’t long before I wanted to put them down on paper, which meant typing on an old Hermes typewriter. And it wasn’t a book that influenced me at first, it was Writer’s Digest Magazine. Back then, Lawrence Block wrote a fiction column, and I devoured that column each month. That was my first start to writing.

Years later I attended writers’ retreats with Susan May Warren and learned how to show instead of tell, create three-dimensional characters, including the villain, and so much more. Larry Brooks and James Scott Bell introduced me to plot and structure. I think the writing community is very giving.

I’ve read suspense all my life, starting with the Bobbsey Twins and The Black Stallion, and then I read my first Mary Higgins Clark book and was hooked forever. I think one reason I love this genre is because not only does justice prevail and wrongs are righted, but there is tension on every page. I become so immersed in the story, dinner burns, the bed goes unmade, sleep becomes unimportant—I want to see how the story ends.

When I’m creating a story, I want my readers to feel the same way. One of the best compliments I’ve received was when a reader was late to work because she read until 2:30 in the morning to finish my book.

I noodled OBSESSION around in my head for at least a month before I started putting anything on paper. I thought about the crime journey, which is basically the plot, and then the characters and the setting.

The setting of Natchez and the Natchez Trace Parkway was predetermined in the proposal I sent my editor. However, I had never been to Natchez when I first started working on the Natchez Trace Parkway Rangers series. That meant a road trip! Now, I’ve made four trips and would have made another this year except for COVID. After the first trip, I wanted to move there. I love Natchez!

Back to the plot and characters. My plot depends on my characters and how they relate to the crime. I fleshed Emma Winters and Sam Ryker out as much as I could, discovering what made them who they are when they first walk on the page. But at some point, I had to start writing the story to learn more about them.

As for the plot, I usually only know what the primary crime will be, and why it is important in this particular timeframe. Like in OBSESSION—someone moving a body at Mount Locust that had been buried for ten years is the crime that has to be solved. But first I had to know why the body had to be moved now. Why not last year? What’s the trigger? Once I knew the answer to that question, I knew my characters could figure out the rest of the story and tell it to me.

There are always two or three characters who can be the villain (or antagonist) in my stories. I rarely know who the villain is until the end, and sometimes I have to go back and beef up their part. I like to leave enough clues so that if my readers are paying attention, they can figure out who the villain is.

Patricia Bradley is the author of Standoff, as well as the Memphis Cold Case Novels and Logan Point series. Bradley won an Inspirational Reader’s Choice Award in Romantic Suspense, a Daphne du Maurier Award, and a Touched by Love Award; she was a Carol Award finalist; and three of her books were included in anthologies that debuted on the USA Today bestseller list. She is cofounder of Aiming for Healthy Families, Inc., and she is a member of American Christian Fiction Writers and Romance Writers of America. Bradley makes her home in Mississippi.