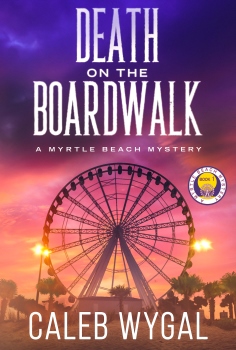 The Myrtle Beach Boardwalk is normally an idyllic place, until death arrives on recently widowed bookstore owner Clark Thomas’s doorstep. When the body of a local businesswoman and environmentalist gets dumped by the back door of his shop, Clark finds himself in a unique position to investigate the crime. As he launches his own search for the killer, Clark comes across a variety of colorful Boardwalk inhabitants who might have had reason to kill an otherwise beloved person. Can he do it and start putting his wife’s death behind him in the process, or will it open up a fresh wound?

Caleb Wygal recently spent some time with The Big Thrill discussing his latest mystery, DEATH ON THE BOARDWALK:

Shortly after my family moved to the Myrtle Beach area of South Carolina and acclimated ourselves, one area that stood out to me was the Myrtle Beach Boardwalk. It’s a beautiful area that has millions of tourists of all ages and walks of life come through every year. One thing that occurred to me was that, while most of the faces change every day, the people that work in the various shops, amusement parks, resorts, restaurants, etc. remain the same. I pictured them getting to know one another, and that inspired me to set a cozy mystery series there.

Once I had the setting and general storyline set, the book itself came together smoothly. My biggest obstacle was finding time to write. By day, I am a stay-at-home dad with a three-year-old and social media marketer. Juggling those three aspects of my life (while moving three times in the process of creating this book) was the biggest challenge.

The biggest opportunity I saw was, despite the number of yearly visitors and admirers of Myrtle Beach, there’s few works of fiction set there. I hope to capture readers from that audience who enjoy a good, clean mystery series.

DEATH ON THE BOARDWALK, I hope, imparts a small-town feel in a busy location while providing a compelling mystery.

Instead of having a series of mysteries that could be read as standalones, I have an overarching storyline for the series involving the protagonist, Clark Thomas, that the reader won’t realize is there until the very last line of the novel.

I grew up reading all the Sherlock Holmes stories and novels. Those got me interested in solving puzzles via the written word. On the mystery side, through the years I’ve been a big fan of three Johns: Grisham, Lescroart, and Sandford.

My previous novels were action/adventures that lent a heavy hand to Clive Cussler.

If you have a limited amount of time to write, how do you do it?

I had to commit to writing at least 500 words a day, no matter what. My writing time is usually early mornings before my son wakes up. If I can’t get to a computer during the day (which my son is drawn to like a moth to flame), I can use apps on my phone to get writing done. Instead of spending time on social media or playing games, I dedicate to reaching that writing goal first before play.

His two Lucas Caine Adventure novels, Blackbeard’s Lost Treasure and The Search for the Fountain of Youth, were both Semi-Finalists for the Clive Cussler Adventure Awards Competition.

He is currently at work on the next book in the Myrtle Beach Mystery Series.

He lives in Myrtle Beach with his wife and son (the munchkin).