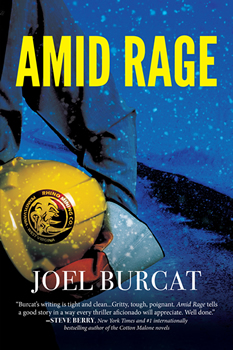 Such is the case with his latest novel, AMID RAGE, the story of opposing sides in a strip mine permit battle—a psychotic coal mine operator versus cynical neighbors with an anti-mining agenda. Environmental prosecutor Mike Jacobs is on site to “babysit” the case, but it soon becomes more complex and dangerous than “children gone bad.”

Mike finds himself caught between the lawyers for each side—and neither is playing fair. He must use all his talents as a lawyer and rely on discretion and courage to do what is right. But it won’t be easy. Before the book’s end, someone will die—but who?

In this The Big Thrill interview, Burcat shares some background on his latest thriller, a novel New York Times bestselling author Steve Berry calls “a good story in a way every thriller aficionado will appreciate.”

Plot. I had been thinking about writing a legal thriller about coal strip mining and after doing some research decided a permit battle between the mine operator and the neighbors would be interesting both to the readers and to me. I liked the idea of having my main character caught in the middle. That way he could be in intense conflict as he is tugged in the direction of both the neighbors and the mine operator.

I enjoy a good legal thriller. As a lawyer, I find the intensity of the combat between lawyers and within the lawyer to be fascinating. These books show intelligence, passion, fear, anger, and wit. They are fast-paced (if done well) and are full of twists and turns. In other words, they can make perfect thrillers.

I continue to be surprised at how difficult it can be to translate scientific and engineering concepts into words that are interesting to lay readers. I think I have mastered it, but it requires a lot of effort and re-writing.

No spoilers, but what can you tell us about your book that we won’t find the jacket copy or the PR material?

An important subplot in AMID RAGE is Mike’s love for his best friend and paralegal Nicky Kane. The motivation for his decisive and deadly decisions at the end of the story are his feelings for Nicky.

His novels have received awards from PennWriters, ScreenCraft, N.Y. Book Festival, and Readers’ Favorite. In addition, he has several published short stories.

Burcat lives in Harrisburg, Pa., with his wife, Gail. They have two grown daughters, a son-in-law and granddaughter.