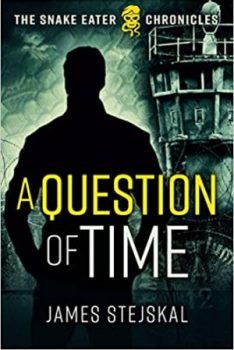 Kim Becker and his Special Forces team just finished one high-risk operation only to be thrown into another—this time it’s even more dangerous. The team has little time to prepare for a mission the CIA says is of national importance—to rescue one of the CIA’s most valuable agents. Now Becker must take his men and an untested, untrained woman into the heart of communist East Germany to find his quarry and bring him out before he is caught by the Stasi—the dreaded security service he has betrayed. For Becker and his team, the Cold War is about to turn hot.

James Stejskal recently spent some time with The Big Thrill discussing his debut novel, A QUESTION OF TIME:

The setting determined the plot and the characters—it is set in Cold War Berlin in the 1970s. Without that setting nothing else would exist. It is a story based on a time period, a mindset, and the things that really happened.

I served 35 years working for the US government, mostly in Special Forces and the CIA. The things I saw and experienced weren’t meant to be revealed—or so the government had me believe. In spite of that, I knew several stories that needed to be told and I decided that I would write about them anyway. I’ve called them the Snake Eater Chronicles.

How could I do that? Because the story “never happened”; it’s all “fiction”—that’s my story, anyway.

It is authentic fiction. A story based in fact told in a way that demonstrates exactly what it takes to be a member of an operational special forces or intelligence mission and the trials that the men and women actually face.

I wanted to tell a story without over-the-top theatrics—a story that shows that in real life it takes a team to conduct a mission, not just one superhero.

What is true and what is fiction in your novel?

There is a fine line between truth and fiction. As Albert Camus put it: “Fiction is the lie through which we tell the truth.”

The incidents, some funny, some traumatic, all happened, maybe not quite as I describe, but I leave it to the reader to decide where fact ends and fiction begins.

James Stejskal is a military historian and author of A QUESTION OF TIME, a Cold War thriller.

To get inspiration for his writing, he spent 35 years as a soldier and intelligence officer, often working in far-off places with interesting people.

He is also the author of four nonfiction military history books, including Masters of Mayhem, a study of Lawrence of Arabia and the inception of modern British unconventional warfare, a Military History Matters Silver Medal winner by trade.