A Twisted Story of Moral Corruption 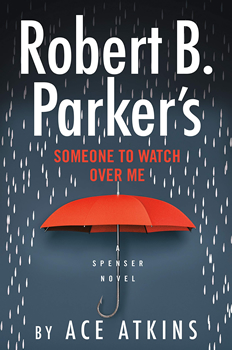 It’s been almost 50 years since the first Spenser book, but Robert B. Parker’s iconic Boston PI is still going strong—thanks to Ace Atkins. SOMEONE TO WATCH OVER ME is the ninth Spenser novel written by Atkins, who took over the series following Parker’s death in 2010.

This one is a real “ripped from the headlines” story about a Jeffrey Epstein-like sex predator of young girls—and it also brings back a Spenser fan favorite character in Mattie Sullivan.

“The Epstein case is such a twisted story of moral corruption and the privilege of extreme wealth,” Atkins says. “As more details came out about how Epstein abused the legal system with money and connections, I knew it was the perfect case for Spenser. He truly despises these people.

“This story is really a continuation of my first Spenser, Lullaby. I wanted to check in with Mattie Sullivan—the young woman who hired Spenser to find out who killed her mother 10 years ago. Spenser readers often ask about her and how she’s doing.

“She’s been working for Spenser part time and has just taken on a case of her own. A young girl comes to Mattie after being sexually assaulted by a rich and powerful man. When she fled the attack, she left her laptop computer behind and asks for Mattie’s help.”

But, of course, it’s the Spenser character himself who’s the key to the popularity of the series—and Atkins says it’s great fun writing about Spenser trading quips and punches with bad guys like Parker did for so many years.

“I’ve been reading Spenser since I was a teenager. I think a lot of my life was formed by wanting to be more like him. As Bob remarked years ago, Spenser gets to say the things you wish you’d said five minutes after an interaction.

“My main criteria for any Spenser novel now is, would this story work if Spenser wasn’t the lead? That question keeps the books focused and solid before Spenser enters the story. I could’ve absolutely written a fictionalized version of the Epstein case with another lead. But Spenser makes it really fun.”

Atkins—who is also the author of the bestselling Quinn Colson series and other acclaimed novels—talked about how he was chosen by Parker’s wife Joan and the Parker estate to continue the Spenser series. He said he was asked to submit 50 pages of a Spenser story—and they offered to send him a few novels to get a feel for the books. “I didn’t need to prep. I sat down and wrote the pages almost immediately…I’ve been writing Spenser ever since.”

“I was exceptionally fortunate to have been chosen by the wonderful Joan Parker to continue her husband’s life work. She told me. But I promised never to tell.”

Atkins has had a fascinating background which includes winning a Pulitzer Prize as a newspaper crime reporter for the Tampa Tribune. He also played big time college football as a defensive end at Auburn—where his team went undefeated at 11-0 in 1993. “Somewhere way back in the dusty files, you might even find me on the cover of an old Sports Illustrated special edition. That team did mean a lot to me.”

He’s currently at work on the 11th book in his popular series about Quinn Colson—an Army Ranger who returns home from Afghanistan to battle crime in rural Mississippi.

“The Quinn Colson novels are all set in my neck of the woods, the Deep South,” says Atkins, who lives in Mississippi. “Quinn is an honest and good man who returns home from a decade of war to find his hometown and county overrun by corruption, drug dealing, and hypocrisy. He takes on a crew of White supremacists who fancy themselves as soldiers—sound familiar?—and ultimately runs for sheriff.”

HBO bought the rights to the novels last year, and a TV series is in the works. “We were moving along at a quick pace pre-pandemic,” Atkins says. “But hopefully production in Hollywood will resume soon. I was thrilled with the direction the show was taking.”

Between Spenser and Colson, Atkins is now writing two books a year. “It ain’t easy. But I welcome the challenge. I’ve been doing it now for 10 years. I work a lot. But I enjoy my work.”

Of course, there are critics who object to someone carrying on a series character like Spenser after a popular author dies. What is Atkins’s response to that?

“That’s easy. Bob wrote two books for the Chandler estate. And Joan Parker asked me to keep working. One doesn’t say no to Joan Parker. It’s been a real honor to keep Spenser working. And so many readers love this guy. They don’t want the series to end, and that’s the highest compliment to Parker’s legacy.”

And, even though Spenser has aged over the years in the books, Atkins points out that his values remain the same in the books he writes.

“I think Spenser’s integrity and moral values resonate today much like they did in the 1970s,” he says. “In 2020, we are surrounded by a tidal wave of hypocrisy and corruption. Reading, and knowing, a character who lives by a moral code is great comfort. I believe we all wish there were more people like Spenser out there who understand ethics and live by their word.”