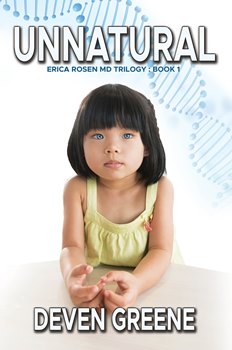 Dr. Erica Rosen is perplexed when she sees a young Chinese girl with blue eyes in her San Francisco pediatrics clinic. The girl’s mother, Ting, is secretive, and Erica suspects she has entered the country illegally. Later, Erica encounters Ting’s son and discovers he has an unusual mutation. Erica learns that Ting’s children underwent embryonic stem cell gene editing as part of a secret Chinese government-run program.

The Chinese government wants to murder Ting’s son to prevent others from learning about his unusual mutation and the secret gene-editing program. At Ting’s urging, Erica heads to China to expose the program and rescue the infant Ting was forced to leave behind, all while attempting to evade the watchful eye of the Chinese government.

I first decided on the plot of human embryonic gene editing, a new and powerful technique which many scientists fear may be used unethically. Once the plot started gelling in my mind, I realized the story would need to take place in a scientifically advanced country with a strong authoritarian government. That gave me a choice of Russia or China. I chose China, thinking that would be more interesting.

My biggest challenge writing this book was a newsworthy event that happened shortly after finishing my first draft. I was shocked to read in the newspaper that a Chinese scientist had gone against an international agreement and performed the first human embryonic gene-editing experiment leading to live-born infants. I needed to make a few changes in my novel on account of that. The biggest opportunity was speaking to others about this interesting and important subject.

Question: Should scientists perform human embryonic gene cell editing, and if so, what types of changes should they make?

Answer: I don’t think human embryonic gene cell editing should be allowed at this time. It’s too dangerous! In the future, when scientists have better control over the process, I think the elimination of disease should be a top priority. I imagine there will be some people who will want to edit their babies by making them smarter, taller, more attractive, etc. I see this as being a contentious area in the future.

Fiction writer Deven Greene lives in the San Francisco Bay Area. Ever since childhood, Deven has been interested in science. After working as a biochemist, she went back to school and became a pathologist. When writing fiction, the author usually incorporates elements of medicine or science. Deven has penned several short stories. UNNATURAL, Erica Rosen MD Trilogy: Book 1 is the first novel the author has published.