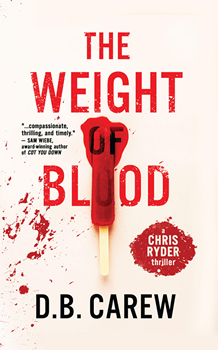 In D. B. Carew’s THE WEIGHT OF BLOOD, the second in what Carew calls the Fighting Darkness series, Chris Ryder, a forensic psychiatric social worker, finds himself with a new patient, Marvin Goodwin—a young man on the autism spectrum who’s accused of killing an ice cream vendor. After interviewing Goodwin a few times, Ryder begins to suspect he might not be guilty of murder, and he sets out to find out the truth—while at the same time dealing with his dangerous half-brother who Chris helped bring to justice in Carew’s first novel, The Killer Trail.

Carew knows of what he speaks—he’s spent more than 20 years working at a forensic psychiatric hospital in his native Canada.

In this The Big Thrill interview, he talks about his background and how his job has impacted his writing.

Tell us a little about your background.

I was born and raised in Newfoundland and Labrador, Canada. My father operated a land surveying company. During the summers of my university days, my contribution towards tuition involved working with him, often in remote wooded areas clearing trees, while under siege from bugs and mosquitos and the occasional moose. That’s how I learned the value of hard work.

I was an inquisitive kid, loved reading the Hardy Boys. I remember being enthralled with their detective manual, my active imagination viewing every unfamiliar car entering our neighborhood with suspicious eyes.

During the summer of 1993 I visited my cousin in Vancouver. He and his housemates played in a rock band, and I had the pleasure of getting a “behind the scenes” look at the topsy-turvy life of musicians chasing their dreams. That’s where I learned the value of being a struggling artist. It was also through these connections that I met my future wife, and British Columbia has been my home ever since. We have a 19-year-old son and a 17-year-old daughter.

In THE WEIGHT OF BLOOD, you write a lot about how people think and why they do the things they do. Where does this come from?

I’ve long been interested in examining why people act the way they do. In university, I took courses in abnormal psychology and criminology. I was drawn to the “helping professions” and obtained a bachelor’s and master’s degree in social work. For the past 22 years, I’ve been a social worker at a forensic psychiatric hospital. This kind of work is rewarding but also challenging, and self-care is a must.

You’re a runner. How does this impact on your work?

For me self-care involves running. It was during a run on a snow-covered trail that I found a cell phone several years ago. While trying to reunite the phone with its owner, my active imagination took over, and I started to develop a series of criminal motives for why it had been abandoned. By the end of that run, I had the start of a story. That story became Fighting Darkness: The Killer Trail, which was shortlisted for the Crime Writers Association Debut Dagger award for unpublished writers in 2013. After a minor title change, The Killer Trail was published by NeWest Press in May 2014.

Tell us a little about THE WEIGHT OF BLOOD.

Both books take place in a forensic psychiatric hospital, where the main character, Chris Ryder, is employed as a social worker, assisting patients with mental health challenges who have come into conflict with the criminal justice system. I didn’t originally intend to incorporate my work into my writing, but oddly enough, the experience has become therapeutic for me. It’s also my hope that this unique setting will appeal to readers. So while the stories are entirely fictional, I approach them from the “write what you know” perspective.

You’re still working in a forensic psychiatric hospital. What experiences there have been incorporated into your work?

My work as a forensic psychiatric social worker serves as inspiration for my novels. My challenge (and opportunity) is to balance telling an entertaining and compelling story while also highlighting some of the difficulties mental health clients experience in their lives, as well as the challenges caregivers can experience in providing their care.

In writing about mental health and the forensic system, it’s important to me that I don’t reinforce stereotypes or the stigma often associated with mental illness. While my primary goal in writing is to entertain, I make the most of my opportunity to provide insight and education into understanding mental health issues.

Given that I continue to work full time as a forensic social worker, one of the biggest challenges I encounter is finding time to write. For me, it’s essential that I strive for a harmonious balance between my work, family, and writing life. As a result, it’s more about quality versus quantity when it comes to writing. Having said that, inspiration for writing comes to me in many forms, and it’s not unusual for me to be awakened in the early hours of the morning with an idea for a piece of dialogue, or to develop an action scene while walking on my favorite trail. As a result, my constant companion is the Voice Memos app on my smartphone.

My books take place in British Columbia, and I’ve been influenced by local writers including Sam Wiebe and A. J. Devlin in terms of how they weave the local Vancouver Lower Mainland setting into their stories. I’ve found the writing community in BC to be welcoming and have been influenced by BC writers including Robin Spano, Debra Purdy Kong, and Dietrich Kalteis, among many others. I’m also grateful for the support I’ve received from the amazing publishing team at NeWest Press.

I originally envisioned my Fighting Darkness series as a story told through three books, and I’m currently working on the third one featuring Chris Ryder and the villainous Ray Owens [Chris Ryder’s evil half-brother]. The first two novels reflect the build-up of the intense animosity Chris and Ray have towards each other. Near the end of THE WEIGHT OF BLOOD, Chris has reason to believe he’s finally done with Ray Owens. But, of course, that turns out to be wishful thinking.

D. B. Carew is a crime fiction writer who lives in British Columbia, Canada, with his wife and their two children. Derrick has worked at the provincial forensic psychiatric hospital for more than 20 years, and his experience as a social worker serves as inspiration for his novels. His first book, The Killer Trail, was shortlisted in 2013 for the Crime Writers’ Association Debut Dagger for unpublished manuscript and was published by NeWest Press in 2014.