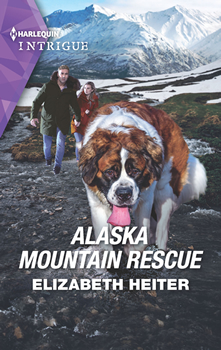 Elizabeth Heiter’s second book in her K-9 Alaska series, ALASKA MOUNTAIN RESCUE, is a thrilling ride through the wilderness, full of unexpected twists and turns. Though the protagonists face unique personal challenges not often seen in fiction, they are expertly woven through the book with authenticity and should provide hope to all of us.

Alanna Morgan, with her therapy St. Bernard, Chance, at her side, must overcome the trauma from her childhood to help save others from a similar fate. But her plans are interrupted when Peter Robak, a rookie police officer, decides her motives are not what she purports them to be. His disability makes his job in law enforcement difficult, and acceptance by his peers tenuous at best. When he meets Alanna he believes if he can successfully intervene in her plans, it will prove to his colleagues that he can be an effective officer, even with his handicap. But when Alanna and Peter ultimately join forces, they discover how much they have in common and how effective they are as a team.

Below is an exclusive The Big Thrill interview with Heiter that provides insight into her writing process, why K-9 characters are important to her stories, and what readers can expect from her next.

What appeals to you most about writing books with K-9 characters?

ALASKA MOUNTAIN RESCUE will be my 13th full-length novel, but it’s only my second involving K-9s. I grew up with a menagerie, so writing about animals feels natural to me. Writing about K-9s allows me to show the special bond between the dogs and their humans. BookTrib said about my first K-9 Alaska series book, “K-9 Defense stands out not only for its superb, on-point research, but also for the pathos of watching damaged souls, man and animal, helping to heal each other.” That really sums up my approach to adding K-9s to my stories. All of my protagonists have unique journeys, but in each of my K-9 books, the dogs help their humans tackle not just their jobs (whether it’s a former combat tracker dog in K-9 Defense, a therapy dog for victims of violent crime in ALASKA MOUNTAIN RESCUE, or a victim specialist K-9 and police K-9 in my next two K-9 Alaska series books coming later in 2021), but also to deal with their own demons.

You grew up with St. Bernard dogs, which are known for performing mountain rescues. Is the ability to dig out people trapped in the snow innate in the breed or do they require training?

It’s a mix. St. Bernards naturally have a fantastic sense of smell, a great sense of direction, and the ability to withstand extreme cold. They can scent a person under 20 feet of snow and use their enormous paws to dig them out. Once they do, the rescue dogs lie on the person to keep them warm.

St. Bernards got a reputation as incredible rescue dogs back in the 18th century, when monks used them to rescue travelers and soldiers from a particularly dangerous pass in the Alps (one that was rarely snow-free and prone to avalanches). To this day, St. Bernards are used as snow rescue dogs (though now we rely a lot more on technology, too). They’re specifically trained for the work. But having grown up with St. Bernards, I can say that they love the snow and are naturally protective, too. 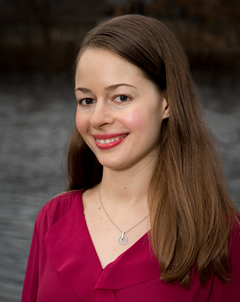 What is your favorite scene or scenes in this novel and why?

I have a couple of favorite scenes. One of them happens when my heroine, Alanna Morgan, is searching for the woman who’d kidnapped her as a child and raised her for most of her life. Alanna and her therapy dog, Chance, search for Darcy high in the mountain in the remote town of Desparre, Alaska, where Alanna and her “siblings” had been hidden away for so many years. As they’re searching, an avalanche breaks loose above them. Alanna knows she can back away from it, but her dog is too close. She makes a grab for him, and they both get swept up in the avalanche. Even as the snow pushes them toward the edge of the mountain, she refuses to let go.

My other favorite scene happens later, when Alanna catches up to Darcy. For 14 years, Darcy had raised Alanna with love. But Alanna ultimately made the decision to turn her “mother” in and return to her real family. It’s a decision that has haunted her ever since—both for hurting people she loved (it also broke up her and the “siblings” she’d known most of her life) and also because she hadn’t made the choice sooner. The desire to do what’s right—even at a personal cost—is a key theme in the story, and it comes into play in this scene, when Alanna has to make another choice: how far to go to protect someone she loves.

The characters in ALASKA MOUNTAIN RESCUE have great names. What is your process for naming characters?

To be honest, most of it feels like a gut reaction. At the beginning, I develop a skeleton of a plot and basics about who my characters are and their conflicts. As I flesh out the characters, they start to feel like real people to me. Their backstories, family histories, and personal identities come into play when I name them. So I may choose a last name based at least in part on the ethnicity of my character. I own a lot of baby naming books so I can flip through them for each new book—when a name feels “right” for a character, that’s it.

A couple of non-writing-related things people may not know about me:

If you weren’t an author, what career would you have chosen?

When I was an undergrad, I took a class that was meant to emulate a first-year law school class and loved it. I seriously considered going to law school (seriously enough that I took the LSAT and accepted a scholarship before ultimately deciding I wanted to write books more). I also write a lot of law enforcement characters, and I take my research seriously, so more than once when talking to an agent with the FBI, I’ve been told I should apply.

What do you think is the single most important attribute of an aspiring author?
I think there are two: commitment and passion. This can be a challenging business, and I think passion carries you through the challenges. I also think a true love of what you do always shows up on the page. The other part is commitment—commitment to the craft, to continuously working to improve, and commitment to push forward, despite any obstacles. Publishing successfully (no matter the method you choose) is a lot of work and can take a long time; having commitment and passion for your work will take you from aspiring author to published author.

How did you conduct research for ALASKA MOUNTAIN RESCUE: online, interviews with experts, or a visit to the library?

All of my books involve a mix of research. I like to start with online and book research to give me a solid foundation on a particular topic. But there’s nothing quite like talking to someone who has actually done the things you’re writing about to fill in the smaller details and add nuance. For this book, I had to do research for both characters. That meant digging into what it meant to be kidnapped as a child and then found many years later—the experience of bonding to kidnappers, the challenge of readjusting to life with the family you’d once known, and the challenges of being in the media spotlight. This part of the research came from a mix of real-life experiences from the perspectives of the people who’d been kidnapped as well as experts who’d worked with them. The other part was learning what it was like to be both a war reporter and a police officer (my hero’s previous and current jobs), plus research around hearing loss (something my hero has). I was able to go to both a real police academy and a writer’s police academy (a conference where actual training officers teach you the process) to help me get the details right. I’ve always loved the research; learning new things is half of the fun of crafting a new book.

The description of the characters’ experiences during an avalanche in your book felt very authentic. Have you ever personally been caught in an avalanche?

Thankfully, I haven’t! In order to get this right, I relied on a lot of research. Again, I focused on a variety of approaches: What does it feel like to be buried in snow? What does an avalanche sound like? What are the warning signs and what precautions would someone who lived in a location where they were common take? And of course, what happens once you’re buried in an avalanche (including the dangers of suffocation and hypothermia)? Then I let my imagination take over and I also let emotion lead the scene: the driving force of the scene, to me, isn’t the avalanche itself but my heroine’s love for her St. Bernard—and then his love for her as he digs her out.

Publishers Weekly bestselling author Elizabeth Heiter likes her suspense to feature strong heroines, chilling villains, psychological twists, and a little bit (or a lot!) of romance. Her research has taken her into the minds of serial killers, through murder investigations, and onto the FBI Academy’s shooting range. Her novels have been published in more than a dozen countries and translated into eight languages; they’ve also been shortlisted for the HOLT Medallion, the Daphne Du Maurier award, the National Readers’ Choice award, and the Booksellers’ Best award and won the RT Reviewers’ Choice award.