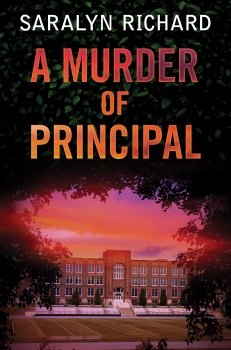 When someone sets fire to Lincoln High and kills its new principal, chaos threatens to overtake the urban school. Assistant Principal Sally Pearce, hired by the deceased principal to help him revamp and change the culture, vows to carry on the mission. In doing so, she locks horns with fellow assistant principal, Wally Welburton, and gets caught up in gang threats, racial tensions, grievances, sexual harassment complaints, and the murder investigation, as well.

Sally never dreamed when she stepped up to lead this culturally diverse school that she would be faced with solving a mystery and returning the school to order. The odds are against her—she is a woman in a man’s job, White in a Black school. Her strong moral compass and her commitment to the school community bolster her as she fights one challenge after another. When a second murder happens on school grounds, Sally realizes she is trapped in a cycle of violence that must be stopped.

Saralyn Richard recently spent some time with The Big Thrill discussing her latest thriller, A MURDER OF PRINCIPAL:

The story of A MURDER OF PRINCIPAL actually came to me fully formed, with plot, characters, and setting intertwined. The story is loosely based on experiences I had as a teacher, administrator, and school improvement consultant in urban high schools, so perhaps setting was the original inspiration for this purely fictional mystery. What I set out to do at first was to bring readers into the high school through the back door.

The biggest challenge was to maintain authenticity in creating an intriguing and entertaining mystery, while transcending the memories of real people and events as they occurred. All authors struggle with this concept, but especially authors of mysteries. None of the real people in our lives want to be victims or perpetrators of crimes. Writing such a book means treading carefully through memories and relationships.  At the same time, the book offers an opportunity to connect with readers on a genuine and personal level. Almost every reader has high school experiences, and this book will resonate. Beyond the setting, the book has insights about fulfilling one’s destiny despite obstacles.

Although the book deals with weighty subjects such as gangs, prejudice, and sexual harassment—in addition to murder—it maintains a tongue-in-cheek tone. The main character assumes the mantle of amateur sleuth quite by accident, and there is enough quirkiness to keep the reader smiling and shaking her head.

I know critics who believe a mystery should be plot, plot, and more plot. I wanted to enrich A MURDER OF PRINCIPAL’s plot by the development of the relationship between the two main characters, the victim and his protégé, who vows to carry on his principles within the school.

One book that influences my writing is Ordinary Grace by William Kent Krueger. Told 40 years after a particularly tragic summer, the story has all of the gripping parts of a mystery (suspense, foreshadowing, irony), but it goes beyond those to create memorable and insightful characters that leap from the pages into real life.

How does the old maxim, “Write what you know,” apply to your writing of this book, given that you actually served as a teacher and administrator in a school environment similar to that in A MURDER OF PRINCIPAL? How was the experience of writing this book different from those of your previous mystery novels?

In some ways immersing myself in the urban high school setting was more comfortable because of my familiarity of the school’s challenges and protocols to address them. I definitely needed less research for depicting scenes involving educators at work. But that same familiarity made me more cautious. As a work of fiction, the book veers from the factual and enters the imaginative. I had to break away from the constraints of memory to create a fresh and fun story.

Award-winning mystery and children’s book author Saralyn Richard has drawn from her experiences as an urban high school educator to write A MURDER OF PRINCIPAL. Her previous books, Naughty Nana, Murder in the One Percent, and A Palette for Love and Murder, have delighted children and adults alike. An active member of International Thriller Writers and Mystery Writers of America, Saralyn teaches creative writing at the Osher Lifelong Learning Institute and continues to write mysteries. Reviews, media, and tour schedule may be found at her website.