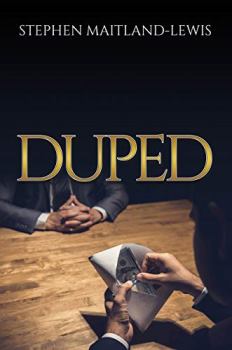 DUPED deals with Sam Marsh and his beloved Palm Springs hotel, which is hanging on by a string. Business is down, Sam is running out of funds, and he’s looking down the barrel of a prospect he doesn’t want to imagine, selling his stake to his ex-wife. When his friend Tony suggests a Nigerian money-laundering scheme, Sam forgets that most deals that seem too good to be true are. In DUPED —a novel of high-stakes schemes, suspense, and sex—Sam and Tony travel to Nigeria to facilitate the movement of funds, $37 million, to the Swiss bank account of a shell company. Between his dealings with the nefarious and commanding Dr. Kidogo and his run-in with an American lout who’s in Lagos to carry out his own scam, Sam doubts whether the profits he stands to earn are worth it. Especially with a new woman in his life, the beautiful and enigmatic Dina, who discourages him from putting himself in danger.

An appreciation that greed and corruption know no borders giving rise to international conglomerates whose foundations are steeped in fraud.

By matching the needy and the greedy in a strategy that traverses continents and the corridors of governments, first world and third world.

Pulling off a major fraud is simpler than most people would imagine.

Harold Robbins for character and plot; Philip Roth and Ernest Hemingway for economy of words; and Somerset Maugham for style.

Having spent much of my career in arranging large loans for developing countries and seeing at first hand major corruption in play.

Question: How did you come to write this book?
Answer: I, myself, was taken in by a Nigerian fraud situation and made three trips to Nigeria, experiencing many of the events I describe in DUPED. I originally wrote it as non fiction but the late author Harold Robbins encouraged me to rewrite it as fiction. And here it is 20 plus years later.

Stephen Maitland-Lewis is an award-winning author, a British attorney, and a former international investment banker. He has held senior executive positions in London, Kuwait and on Wall Street prior to moving to California in 1991. He has owned a luxury hotel and a world-renowned restaurant. A member of PEN, the Palm Springs Writer’s Guild and the Author’s Guild, Maitland-Lewis is also on the Executive Committee of the International Mystery Writers Festival. His novel Hero on Three Continents received numerous accolades, and Emeralds Never Fade won the 2012 Benjamin Franklin Award for Historical Fiction and the 2011 Written Arts Award for Best Fiction. His novel Ambition was a 2013 USA Best Book Awards finalist and won first place for General Fiction in the 2013 Rebecca’s Reads Choice Awards. More recently, Maitland-Lewis’ novel Botticelli’s Bastard was a 2014 USA Best Book Awards finalist in three categories and won the Bronze Award in Best Regional Fiction (Europe) at the 2015 Independent Publisher Book Awards.