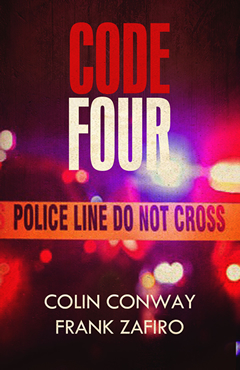 In CODE FOUR, Frank Zafiro and Colin Conway team up to bring you the explosive final installment in the Charlie-316 series.

The last two years have been tumultuous for the Spokane Police Department. On the surface, the agency has suffered from scandal and police officer deaths. Underneath, a secret and deadly game of cat and mouse has played out.

Now the Department of Justice has sent investigators to determine if federal intervention is needed. Their presence disrupts everyone’s agenda and threatens to expose dark secrets. Goals shift from winning situations to simply surviving. Not everyone will.

In this tense final installment of the Tyler Garrett saga, everyone’s true nature is laid bare. Garrett scrambles to maintain what he has built. Chief Baumgartner tries to protect his department. Captain Farrell’s plans crumble around him, and Officer Ray Zielinski’s career is at risk. Meanwhile, DOJ supervisor Édelie Durand diligently follows the facts where they lead. And through it all, the unflappable Detective Clint keeps his eyes firmly on the prize—Officer Tyler Garrett.

The Big Thrill recently checked in with the authors to learn more about this new release and the series it inhabits.

Tell us about your main character, Tyler Garrett. What has his journey been like up until now?

Colin Conway: It’s been a journey of misdirection and lies.  In the first book, Charlie-316, Tyler Garrett enters the story as a hero—the favorite son of the city’s police department. However, as his intentions are revealed, the reader is faced with the realization that everything is not as it seems.  With Never the Crime (#2) and Badge Heavy (#3), we peeled away more of Garrett’s mask. By the end of Badge Heavy, the reader was left with no illusions about Tyler Garrett. He’s a dirty cop with blood on his hands.

Frank Zafiro: While you could argue that Garrett is the main character, both Colin and I were intrigued by other important characters throughout the series and their journey. Detective Wardell Clint, for example, has been single-minded in his mission to force Garrett to justice. But he bent (and even broke) rules to accomplish this goal. Is he corrupt? What about Captain Farrell, who was Clint’s lone conspirator in this four-book effort to bring Garrett down? He didn’t abide by the rules, either, and has put his career at risk. The same could be said for Officer Ray Zielinski, whose path throughout these four novels has been one riddled with well-meaning bad mistakes. While none of them were as dirty as Garrett, no one could argue they were entirely clean, either. That reality is what the overall journey of this story has been.

FZ: As a kid, I was into science fiction and fantasy. I grew to like crime fiction more in film and TV. It wasn’t until I was in my early 20s that I first began to dabble in reading the stuff. After I became a police officer, you’d think it would have been kind of a busman’s holiday to read crime fiction, but that was what I was drawn to. When I resumed writing fiction again (the catalyst for this was meeting Colin, actually) after about eight years of writing only police reports and college papers, it was no surprise that crime fiction is what poured out. One of the things I like about the genre is the same as what I liked about fantasy and sci-fi—that the boundaries are blurrier than in mainstream fiction. That, and you can tell a deeper story than the one on the surface, exploring social or human issues, and people seem more receptive to letting the idea in to consider than they otherwise might. Or maybe I’m just twisted.

CC: As a younger man, I fell in love with Lawrence Block’s Matt Scudder and John D. MacDonald’s Travis McGee. Those series led me to harder fare like Andrew Vachss’s Burke series and Richard Stark’s Parker novels. It wasn’t just the plots that intrigued me. It was how those authors constructed their stories.  Stark’s prose was tight. Block’s style almost felt rhythmic at times. Vachss’s imagery was brutal. MacDonald’s hero would opine about how progress changed the people and landscape of Florida. No other genre brought me the excitement those crime fiction authors did.  Maybe it was that battles in galaxies far away or fire-breathing dragons never seemed as real as a man standing alone in an alley after a bank robbery has gone wrong.

CC: Character, of course, is one.  Every genre of fiction depends upon interesting and believable characters.  For suspense, though, I’m attracted to pace. Every chapter—every scene—should pull me deeper into the mystery.  It doesn’t have to be at a frenetic pace, but it should be relentless. I should regret putting the book down and have an almost desperate desire to get back into the tale.

Since you both are on record as believing that the overwhelming majority of police officers are good people doing difficult, important work, why have you written a tale that portrays police corruption?

FZ: The overarching theme of the series is noble cause corruption. In a nutshell, this is defined as doing the wrong thing for the right reason. Say you mess up on the timing of a procedure during the arrest of a child molester, one that will allow this admitted serial pedophile to go free. What do you do? Let it happen, or tell a small lie for the greater good so that he goes away, like he should? There’s no doubt he’s guilty, and no doubt he’ll do it again. All you have to do is lie about a stupid administrative, procedural detail that has nothing to do with his guilt or innocence. Again, what do you do? If you tell that lie, that’s the beginning of noble cause corruption. And maybe it stops there, a once-in-a-career wrong. But more often, this can lead to greater and greater actions that are “wrong for the right reasons.” In the most radical of instances (the ones that we see in the news) it can even eventually get to the point of officers acting with impunity, committing blatant criminal acts, as we’ve seen in massive police scandals over the years. Every cop encounters this temptation. Almost every cop overcomes it or mitigates how it impacts him/her. But in this series, we wanted to look at those who didn’t stop themselves from succumbing. We tackle this subject, exploring it and asking a lot of the questions that come with that exploration. Is Clint dirty for doing what he does to try to finally take down Garrett? Or is he justified? What about Farrell? Zielinski? And what the hell happened to Garrett? The majority of the officers are exactly as described in the question—good people doing difficult, important work. We just focused on those few who weren’t.

CC:  That’s an interesting question. I think a large segment of our population has an overprotective reaction when it comes to examining motives and/or actions of the law enforcement community. It’s almost treated as unpatriotic to question if an officer might have responded less than professionally or even unethically. Yes, being a police officer is a difficult and often thankless job.  So are hundreds of other professions. However, only a law enforcement officer can legally take away someone’s freedom and their life. That is an awesome power to give our fellow citizens especially when they have behind them the power of qualified immunity (protection from civil suits). Art—whether it be books, movies, or television—allows us to ask uncomfortable questions which is what we did with this series. Is any level of noble cause corruption justifiable if it helps bring down a dirty cop?

COLIN CONWAY is the author of The 509 Crime Stories, a series of novels set in Eastern Washington with revolving lead characters. They are standalone tales and can be read in any order. He served in the US Army and later was an officer of the Spokane Police Department. He’s a commercial real estate broker/investor, owned a laundromat, invested in a bar, and ran a karate school. Colin lives with his beautiful life partner, their three wonderful children, and a crazy, codependent vizsla that rules their world. Find out more about him at his official website.

FRANK ZAFIRO was a police officer in Spokane, Washington, from 1993 to 2013. He retired as a captain. He is the author of numerous crime novels, including the River City novels and the Stefan Kopriva series. He lives in Redmond, Oregon, with his wife Kristi, dogs Richie and Wiley, and a very self-assured cat named Pasta. He is an avid hockey fan and a tortured guitarist. You can keep up with Frank on his website, where you can score a free book just for signing up for his newsletter.