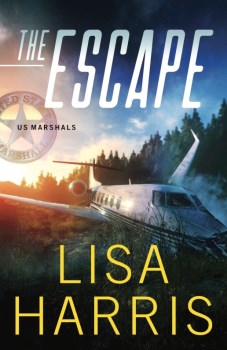 US Marshals Madison James and Jonas Quinn are thrust into a high-profile case when they are called on to transport two prisoners across the country on a private plane. But when the plane experiences engine trouble en route from the Pacific Northwest to Colorado, the pilots crash-land the aircraft deep in the heart of the sprawling Salmon-Challis National Forest.

When Madison and Jonas regain consciousness, they find both pilots and one prisoner dead—and one fugitive on the run. They’ll have to negotiate the rugged and remote backcountry through Idaho, Wyoming, and Colorado while tracking a murderer who is desperate to disappear—and will do anything to stop them.

In the real word, we like to think that justice always prevails, but the truth is that all too often the bad guy wins. In writing suspense, everything can’t always be tied up in a neat bow at the end, but I can still ensure that justice is served and the good guys always win.

One thing I love about writing is not only developing storylines for my characters that put them in grave danger but also dealing with the inner turmoil of a personal situation. THE ESCAPE puts two US Marshals in the middle of a dangerous fugitive hunt, but Madison James is also dealing with the death of her husband. It’s been five years since his murder, and she still has no solid leads on who killed him, or who has been leaving a black rose on his grave every year on the anniversary of his death. But today, she found the black rose in her room—in her house. Whatever started five years ago clearly isn’t over.

I was fascinated by what I learned about the US Marshals Service while researching this federal law enforcement agency that has served our country since 1789. While they don’t investigate or prosecute crimes, they do put their own lives on the line every day. They track down dangerous fugitives and are involved in judicial security, prisoner transportation, and serve as custodians of property seized from illegal activities. They also have established a Missing Child Unit, where they work with local law enforcement agencies to find endangered and missing children.

Lisa Harris is a bestselling author, a Christy Award winner, and the winner of the Best Inspirational Suspense Novel from Romantic Times for her novels Blood Covenant and Vendetta. The author of more than 40 books, including the Nikki Boyd Files and the Southern Crimes series, as well as Vanishing Point, A Secret to Die For, and Deadly Intentions, Harris and her family have spent over 16 years living as missionaries in southern Africa.