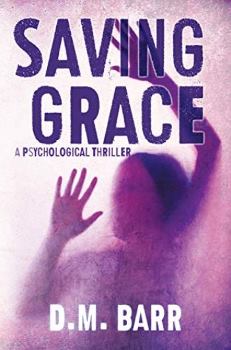 Grace Pierrepoint Rendell, the only child of an ailing billionaire, has been treated for paranoia since childhood. When she secretly quits her meds, she begins to suspect that once her father passes, her husband will murder her for her inheritance. Realizing that no one will believe the ravings of a supposed psychotic, she devises a creative way to save herself—she will write herself out of danger, authoring a novel with the heroine in exactly the same circumstances, thus subtly exposing her husband’s scheme to the world. She hires acclaimed author Lynn Andrews to help edit her literary insurance policy, but when Lynn is murdered, Grace is discovered standing over the bloody remains. The clock is ticking: can she write and publish her manuscript before she is strapped into a straitjacket, accused of homicide, or lowered six feet under?

With a cast of secondary characters whose challenges mirror Grace’s own, SAVING GRACE is, at its core, an allegory for the struggle of the marginalized to be heard and live life on their own terms.

While SAVING GRACE outwardly appears as old-time movies Gaslight + Suspicion with a #MeToo twist (i.e. she fights back), to me, it’s a very feminist novel. It’s for all the women of a certain age, trapped in loveless marriages, who stay for the sake of the kids and try not to make waves. The women who wonder daily about their validity—trying to determine if anyone hears them anymore—for whom insecurity constantly seeps into their inner thoughts as they ponder, “Is what I’m seeing real? Is this all there is, or do I deserve more?” For every “invisible” woman over 40 who silently screams to be acknowledged, I hear you, and I hope this book helps to return your hijacked voice.

Domestic suspense puts readers in familiar situations and reveals the terrors that could exist in everyday life if someone isn’t playing nice.

Barrington Pierrepoint was based on Carter Pewterschmidt from Family Guy. I pictured Will Sasso for Tom Druthers, and of course Tom’s name is the one unvoiced joke in the book (Will Grace ever have her druthers?).

Authors who combine humor with mysteries or suspense: Brad Parks, Harlan Coben, and Linwood Barclay (their earlier books), as well as Marshall Karp (all his books). I like James Patterson and Sidney Sheldon for short chapters. And all my banter was influenced by The Avengers, the ’60s television show from England. Though I’ve been told I write like Susan Isaacs, so she must have influenced me more than I realized.

What are the themes that run through all of your books?

The need for validation, issues between parents and their children, and the constant presence of psychiatrists! Also my books always include a multicultural cast and diverse sexual identities because that’s how life is in New York!

By day, a mild-mannered salesperson, wife, mother, rescuer of senior shelter dogs, competitive trivia player, and author groupie happily living just north of New York City. By night, an author of sex, suspense, and satire. D. M. Barr is on the board of Sisters in Crime/NY Chapter as programming chair, and is a member of Mystery Writers of America.