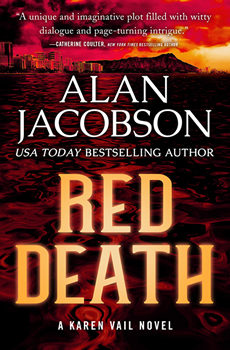 When Det. Adam Russell of the Honolulu PD encounters the body of a woman in her sixties—the second in recent days to inexplicably die of what seems like natural causes—he reaches out to Karen Vail, the renowned FBI profiler, who hops on the next plane.

But even for someone as fluent in the language of murder as Vail, this case is hard to read. How were these women asphyxiated with no signs of trauma? How can she gather clues or collect evidence when the killer seems to strike during the briefest casual encounters? Is this the behavior of a male or a female perpetrator? And perhaps most terrifying of all, if the deaths appear so natural at first glance, how many victims have already been overlooked?

Now, as something cold and dark lurks under the sunny warmth of this island paradise, Vail must stop a serial killer as elusive as the breeze…

The germ of the idea was something I experienced in my home town many years ago. My thoughts began to go into “what if” mode and a terrific idea came to me. I thought right then that it was a story I had to tell. But the time was never right…until now.

So many—and in different ways. Some from reading, others from personal interactions and discussions with them. To name a few for the latter category, John Lescroart, Steve Martini (both reading his books and personal discussions), Michael Connelly, James Patterson, Andy McNab (reading), Allan Folsom (reading), David Morrell (both), O. Henry (obviously, reading. I have not time traveled. Yet).

What makes Karen Vail different from other FBI agents we read about in novels?

Great question. I’m glad you asked that—actually, I’ve never been asked that. When I created Vail, it was without preparation. I didn’t sit down and plan her, figure out what her favorite color or food was (I’ve never done such an exercise, but I know some authors do). In fact, Vail just “came to me,” spewing funny line after wise-cracking line…but always in a meaningful way. (If you think of Vail as a female John Corey from Nelson DeMille’s canon, that’s a good comparison…in fact, we were creating our characters at around the same time.)

Vail is really good at what she does, but she makes mistakes. In other words, she’s human! And that was something one of the FBI profilers commented on the first time he read the first few chapters of The 7th Victim (her debut novel). He had asked me to make her real during the several dozen hours we spent discussing profiling and serial offenders—before I started writing The 7th Victim. And when he finished the opening pages, he called me and told me I’d succeeded. So what you get from Vail is based on the reality of what the profilers face—with the drama turned up a bit for entertainment value—as well as what it was really like for the first female FBI profiler trying to be taken seriously in a male unit. (The other profiler I worked with closely was the second female FBI profiler, though the first didn’t last long in the unit.)

So Vail is not only someone we can all relate to, but she’s funny, intuitive, and a trip to hang around with. Real law enforcement agents call Vail “a cop you’d go through a door with” (the ultimate compliment), while my writing colleague Nelson DeMille described her as “a hell of a lady: tough, smart, funny, and very believable.”

Yes—but I can’t disclose it here or I’ll ruin one of the reveals!

A damn good time! Aside from being a fascinating character study of the killer, FBI profiler Karen Vail develops a terrific partnership—and a laugh-out-loud relationship—with Honolulu homicide detective Adam Russell. RED DEATH chronicles the development of the novel’s killer, Scott Meece, and contrasts his struggles to endure his abusive childhood and personal tragedies with Vail’s and Russell’s efforts to figure out who is behind the murders. The biting humor of their interactions reminds us why we (and James Patterson, Michael Connelly, Nelson DeMille, and Tess Gerritsen) love Karen Vail.

I’ve always been fascinated by crime. I’ve worked with law enforcement on many levels for 25 years and have developed a keen understanding of how these offenders think and act. My two decades of work with, and personal instruction from, two real FBI profilers whetted my appetite. This experience and knowledge allows me to dig down and examine why these offenders do what they do: commit the ultimate form of violence that one human being can inflict upon another (innocent) human being.

Alan Jacobson is the award-winning USA Today bestselling author of 14 thrillers, including the FBI profiler Karen Vail series and the OPSIG Team Black novels. His books have been translated internationally, and several have been optioned by Hollywood. Jacobson’s debut novel, False Accusations, was adapted to film by acclaimed Czech screenwriter Jirí Hubac.

Jacobson has spent over 25 years working with the FBI’s Behavioral Analysis Unit, the DEA, the US Marshals Service, SWAT, the NYPD, Scotland Yard, local law enforcement, and the US military. This research and the breadth of his contacts help bring depth and realism to his characters and stories.