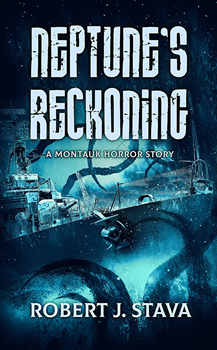 At the easternmost end of Long Island lies a seaside town known as Montauk. Ground Zero on the Eastern Seaboard for all manner of conspiracy theories involving its hidden Cold War military base, rumors of time-travel experiments and alien visitors…

For renowned naval historian William Vanek, it’s where his grandfather’s ship went down on a top-secret mission during WWII codenamed “Neptune’s Reckoning.”

Together with Marine Biologist Daniel Cheung and disgraced French underwater explorer Arnaud Navarre, he’s about to discover the truth behind the urban legends: A nightmare from beyond space and time has been reawakened by global warming and toxic dumping—a nightmare the government tried to keep submerged.

Fear does have a sound frequency. Some predators—like tigers—use it to immobilize a prey. 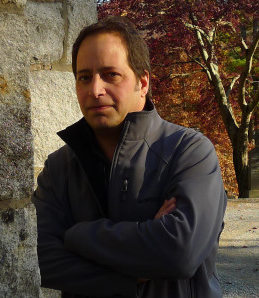 I’ve always been a big fan of Michael Crichton and Ian Fleming—both writers who leveraged a lot of first-hand experience into their books. The first line in Crichton’s autobiography is: “It’s not easy to cut through a human head with a hacksaw.” How’s that for an experience? I love Agatha Christie and John Dickson Carr, both of whom were brilliant at characterization. Lawrence Block, whose book on writing is one of the most useful ever, is also an amazing writer. Margaret Atwood, Rod Serling…I’m just getting started.

It’s a lot of both. As a historian with a nose for the unusual, I continuously discover things that seem way too bizarre to be true.

I’ve always had a mixture of excitement and fear about the deep ocean, probably from combining sailing with those old Saturday afternoon monster movies I grew up with. In this case, it came together with a place I’ve visited for decades—Montauk, New York, thrown in with my version of the conspiracy legends surrounding Camp Hero. I love ships and the sea: both my father and grandfather were avid sailors.

Plenty. I do a lot of research, so each book I write is both an educational and physical journey. I was surprised to find out that whales “shout” at each other when too many start communicating at once, and that the US Navy has hydrophone arrays that have captured spooky sounds in the ocean that are of unknown origin. I discovered how the mechanics of fear actually occur in us biologically, wrangled a private tour of the NOAA flagship Okeanos Explorer (what that crew and ship does is nothing short of awesome) and can say that while hiking one day around Camp Hero, I discovered new high voltage cables feeding into the concrete cap above a sealed bunker there, even though the base was decommissioned in the 1980s.

Robert Stava is an author living in the Hudson River Valley, not far, apparently, from the village of Wyvern Falls, where so many of his horror stories are set.

Originally from Cleveland, Ohio, he grew up in the Finger Lakes region of New York State, and after pursuing a degree in fine arts wound up making his career in advertising at Y&R and J. Walter Thompson in NYC. He went on to become a multimedia art director and later as creative director ran the 3d Media Group at Arup, an international UK-based design and engineering company before moving to the Hudson Valley and catapulting into the wild world of writing horror fiction in 2011.

Stava is also member of the ITW and HWA. In addition to writing, Stava is a trustee on the Ossining Historical Society, is a singer/songwriter, enjoys sailing on the Hudson, and currently holds a second degree black belt in Seido karate.

He is currently at work on two new novels and publishing an anthology of short stories titled Haunted Sketchbook.