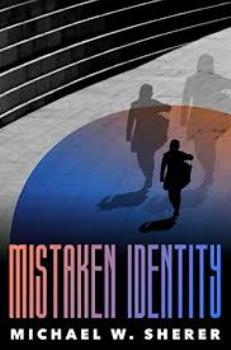 Under investigation for the role she played in stopping an international terrorist, FBI agent Jenny Roberts is on her way home to Wisconsin—a place she hasn’t visited since she left after high school—with her tail between her legs. When a similarly dressed woman on board Jenny’s train witnesses a gruesome murder, Jenny’s caught up in a cross-country chase that ends in a high-stakes showdown in her hometown.

Beyond simple enjoyment, I hope readers consider how, despite a woman’s tremendous intelligence, talent, ambition, and accomplishments, she can still be discounted, undermined, or taken advantage of by men. The #MeToo movement is just the tip of the iceberg when it comes to the fair treatment of women in our society. Men not only need to be held accountable for mistreatment of women, but hold their everyday behavior and interactions with women to a higher standard.

In the age-old disagreement over whether it’s better to be a “plotter” or a “pantser,” I’ve always fallen into the plotter camp. or a road trip as long as a novel, I’ve always been more comfortable having a map to help me get from my starting premise to “The End.” In most cases, that has consisted of pages of notes on characters’ back stories, research on plot points or subjects I want to address in the course of the book, and bulleted outline of what I think will happen in each chapter.

That process, or map, shows me the way and gives me assurance that I’ll get where I want to go. That doesn’t mean, however, that I’m averse to a side trip now and then to see the sights—a historical marker here, a scenic overlook there. Sometimes, it’s a digression into a side topic or a subplot. At others, it may be at the insistence of a character who wants more page time.

With MISTAKEN IDENTITY, though, I tried pantsing for the first time. I did know my starting point—Washington, D.C.—and an ending point—Wisconsin—the latter having been a combination of sticking a pin in a map blindfolded and the elusive creative process that said Wisconsin had the requisite geography and cultural background to be my character’s childhood home.

Beyond that, I knew little when I sat down to write. Instead, I trusted my characters to tell me their stories, to let me know who they were, where they came from, and where their actions were taking the book. They surprised me along the way, constantly telling me more about themselves in their words and actions and revealing their motivations.

It seemed like a longer process but probably was little different than spending three to six months thinking about and outlining a book before writing, and just jumping in and having a back-and-forth with characters about what they were doing. I think the end result is pretty good.

A tremendous number of authors have influenced me as a writer, from Crockett Johnson (Harold and the Purple Crayon) to William Shakespeare. Creative storytelling is what gets readers to turn pages, but a love of words is what communicates ideas.

I find that authors typically fall into one of three categories (four, if you count the stinkers): those who write beautiful prose but can’t tell a story; those who tell a great story but who don’t write well; and those who tell terrific stories with prose so good it makes you wish you had one tenth the talent.

While I appreciate a good story that keeps me up long after my bedtime, I gravitate to authors whose writing soars and sings. Beautiful prose imbues a story with emotion, gives it both a melody and a cadence. It makes a good story better.

Mike is a member of International Thriller Writers and Mystery Writers of America and the author of Stolen Identity, four books in the Seattle-based Blake Sanders series, including Night Strike and Night Blind, which was nominated for an ITW Thriller Award in 2013. His other books include the award-winning Emerson Ward mystery series, the stand-alone suspense novel, Island Life, and the Tess Barrett new/young adult thriller series, currently in development for television.

In addition to novels, Mike is an award-winning feature writer for foodservice trade magazines, the most recent of which is a 2018 gold “Tabbie” award for best how-to article from Trade Association Business Publications International (TABPI) for his piece, “Beer Fizz-ics,” in Foodservice Equipment Reports.