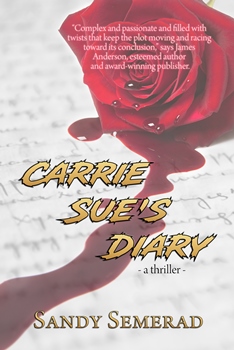 In 1987, Atlanta crime reporter Carrie Sue Justice is happily engaged to marry powerful publisher Marcus Handley until she discovers his late wife is not dead. Marcus, a former bomber pilot during the Vietnam War, feels responsible for what happened to his wife, and with her reappearance, he’s unable to desert her, despite his love and uncontrollable passion for Carrie Sue.

Carrie Sue turns to her best friend Freemont Jackson for advice. Freemont is recovering from a near-fatal gunshot wound. His attackers wore Klan masks, but Carrie Sue suspects the ring leader is Nev Powers, a detective with the sheriff’s department, and interviews a young woman who claims Nev raped her. Soon after the interview, the woman is reported missing. With the help of a search dog and a psychic, Carrie Sue embarks on a dangerous journey to find the missing woman.,

I hope CARRIE SUE’S DIARY entertains and allows readers to escape into the passionate and often dangerous world of Carrie Sue Justice. 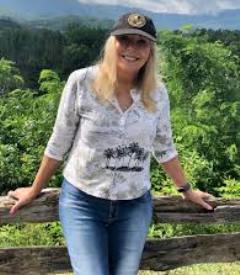 I love to read great thrillers and romantic suspense, and my stories and characters naturally gravitated toward that.

I wrote a background for my characters before I began, and I thought I knew them, but they constantly surprised me during the writing process.

The character Freemont Jackson, referred to in the book as Carrie Sue’s “black brother,” is perhaps the most ethical character in this novel.

Too many to name, but if I must mention a few, Lee Childs, Sandra Brown, James Anderson, Mary Higgins Clark, Jeremiah Healy, Harper Lee (To Kill a Mockingbird), Stephen King—I love his book On Writing—Janet Fitch’s White Oleander. I could go on and on.

Why didn’t you start writing down the stories in your head sooner? I didn’t realize early on how much I’d enjoy the process of writing them down, and it took me a while to learn the craft of writing.

Similar to her protagonist in CARRIE SUE’S DIARY, Sandy Semerad earned a bachelor’s degree—with a major in journalism—from Georgia State University in Atlanta. Sandy has worked as a model, political activist, newspaper reporter, broadcaster, columnist, and editor. She is a published author of three novels and a proud member of International Thriller Writers. Born in Geneva, Alabama, to an artist, piano-playing mother and entrepreneurial daddy, she traveled all over with her mother after her daddy died. Her mother would often take her out of school in the middle of the year to go hither and yon. During this time, she began to make up stories in her head. Sandy now lives in Florida with husband, Larry, and fur baby, Elvis. She has two grown daughters, Rene and Andrea, and a granddaughter, Cody.