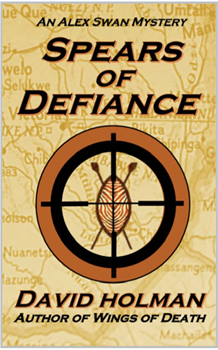 Espionage is the name of the game in David Holman’s latest thriller, SPEARS OF DEFIANCE.

It is November 1979. Unilateral Declaration of Independence is about to come to an end in Rhodesia and a Black Majority government is about to take office. Alex Swan and Andrew Gable of the Services Investigations Department investigate the suspicious death of a Porton Down biochemist, learning he once worked on an experimental, top-secret but now decommissioned biological weapon.

Taking up the trail of the missing phials, they find themselves in Southern Africa and team up with an officer of the South African National Intelligence Service in a race to prevent an engineered ecological disaster.

The Big Thrill recently caught up with Holman to learn more about this exciting new tale of espionage.

Tell us about your main characters, Swan and Gable. What have their journeys been like up until now?

Alex Swan, an only child of parents killed during World War II, was an officer in the Royal Corps of Signals before joining MI5 and eventually being appointed Head of Espionage and Counter Espionage at MI5 from the mid-’50s to 1961, when he was then asked to set up the Services Investigations Department (SID) of the Ministry of Defense with an associate, ex-Scotland Yard detective Arthur Gable. Together, they find themselves troubleshooting various misdemeanors related to home security. Later in years and after three novels, Arthur retired, and his son, Andrew, being a former detective himself, took over where his father left off. Swan is married to Janet, who was no stranger to the security services and is now SID’s Secretary.

In SPEARS OF DEFIANCE, Swan is approaching 60, so the much younger Andrew Gable, also married with a son who is a marine engineer, does more of the physical pursuits of their investigations. Swan also has to face the fear of his department being disbanded following a government security review, which may mean being forced into retirement. The clandestine world of the “great game” of espionage is his life, and he really doesn’t want to give it all up.

If your main characters ever made it to the big or small screen, which actors would you prefer to take the roles?

For Alex Swan I would choose Damien Lewis ,and for Andrew Gable, I would have Ewan McGregor.

While researching for the book, the long bush war in Rhodesia was fascinating to read about, and I also enjoyed the real-life stories from people who lived through it.

My journey into writing crime fiction came more or less by accident. Being a keen aviation enthusiast, I was commissioned to write an article for a hobby magazine on the ill-fated TSR 2 strike aircraft project of the mid-1960s. This warplane project was a British venture to produce a state of the art strike plane for the Cold War, and it was while I was researching the story behind the development issues which eventually led to its cancellation and an intriguing aftermath of the project that the whole saga was sounding like a suspenseful political thriller. All that was required were some good strong characters and an intriguing plot centered on the aircraft. Being an avid fan of spy thrillers and crime mysteries, I decided to try my hand at writing one, and what better way is there to open the story than having a mysterious death at the plant producing the aircraft? And just like the typical plot of a Sherlock Holmes novel, Swan is approached by the dead man’s fiancée after an inquest verdict of accidental death to investigate what she feels is otherwise. With my professional background as an English lecturer, I realized I would probably have some of the skills to produce an interesting story.

I was fortunate to secure a deal with British indie publisher Endeavour Press, and after a few rewrites, Wings of Death was published. At time of submission, a potential series was discussed, and as I already had ideas to bring back Alex Swan and Arthur Gable, I had already drafted an outline for the next novel, which became Countdown to Terror, based on the 1969 race for the moon and involving a secret Nazi organization set up at the end of the war. With this particular story, I also had the opportunity to really explore Swan as a character as he hides a personal secret, which resurfaces due to the nature of the case. One strong element of my Alex Swan mystery books is that all the novels have been based on actual historical events.

To produce a good suspense story, I feel there needs to be a clear mystery that must be solved. However, any story of this genre needs strong and plausible heroes and villains. The plots need to have lots of twists and turns to keep the readers on edge, and having short chapter formats is an essential ingredient to enable almost guaranteed page-turners. Most of all, a suspense writer must make sure all the threads the reader encounters that have kept them thrilled, from inciting incident to the climax, are fully tied up with the resolution and denouement, sometimes with a subtle element of surprise at the end, but not far-fetched, so that you don’t leave the reader with that disappointing feeling. Personally, my favorite reviews are the ones that say they can’t wait for the next Alex Swan adventure, or if they’ve tagged on to a later book in the series, say they will be seeking out the back catalogue of Alex Swan and co.

David Holman lives in rural Kent, England. A family man first and foremost, he is married with three daughters and is a former lecturer of English. David also writes for an international aviation-related hobby magazine, is a reporter for his local newspaper, and produces literature study guides for schools. When David is not writing or teaching, he likes nothing better than to spend valuable time with his family, walking his dogs, and fishing. He says he gets to think about the plots for his Alex Swan novels from the time spent at the waterside.

Like his favorite authors, he sees research as an essential part of the writing process and enjoys the fieldwork of visiting museums and other relevant places of interest that enable him to produce the historic and technical accuracy found in his novels. An avid reader of the thriller and espionage genre, among his list of chosen authors are Frederick Forsyth, Clive Cussler, Dan Brown, Robert Harris, and the master, John Le Carre. From time to time, he also likes to revisit the classics, with Conan Doyle, Verne, Wells, and Dumas his selective choices for sheer escapism. However, David has said that he will generally read anything in order to broaden his personal perspective of the written word.

His ongoing collaboration with Endeavour Media has taken the Alex Swan Mysteries to all new heights, reaching out to readers across the globe and being awarded many five-star reviews. His first novel, Wings of Death, was also nominated for Best Thriller of 2017 in an international online reader award. He has also appeared as a guest on podcast shows such as Spybrary.com.

David is a member of the International Thriller Writers and has just completed the fourth Alex Swan novel.

The September 2020 Edition of The Big Thrill