Digging up the Past 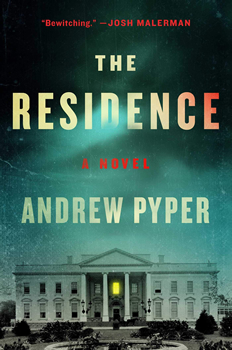 The White House is haunted.

At least, that’s the rumor. And if you’ve never heard that one before, you’re not alone. Just as you may never have heard of Franklin Pierce, the 14th President of the United States (1853-1857).

Andrew Pyper hadn’t heard of him either—but while killing time on the internet looking into haunted house stories, he “discovered the rich and continuous history of paranormal events reported to have occurred in the White House.” And, deep in that rabbit hole, Pyper stumbled on Jane Pierce, Franklin’s wife—a woman who had lost all three of her children prior to her husband’s inauguration. The last of the Pierce boys—Bennie—died in a train derailment, with both Jane and Franklin on board.

“When [Jane] moved into the presidential residence, she spent her time writing letters to Bennie, pleading with him to come back to her from the dead,” Pyper says. “And according to those letters, he did. As soon as I read that, I thought: ‘This is a novel.’”

That novel is THE RESIDENCE, a chilling horror story steeped in history, love and loss, and of course—because this is classic Pyper—a supernatural element that will send genuine chills down your spine.

In it, the president’s late son haunts the First Family, creating not only emotional havoc, but also endangering an already bitterly divided America on the brink of civil war. If that sounds eerily prescient, Pyper insists he’s far from clairvoyant. 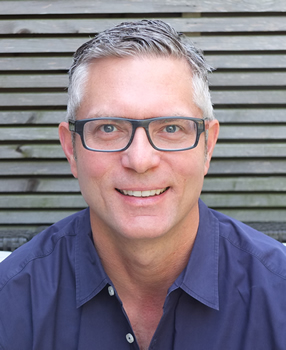 “I started my initial research on THE RESIDENCE shortly after Trump’s election,” he says. “At first, as worried as I was by his presidency, I didn’t see a direct link between the novel I was working on and contemporary events. That’s all different now, however. The idea that the Pierces carried a malevolent entity into the White House (a parasite attached to their grief) and that it has remained there ever since, waiting for opportunities to exploit those who leave themselves open to it—let me just say that the novel became more relevant and timely to me day by day as I wrote it.”

In this interview with The Big Thrill, Pyper delves more into the emotional core of his chilling new horror story, shares his tips for writing suspense, and dishes on the exciting projects he’s working on next.

As a fellow Canadian, I’m always a bit nervous to tackle specific points in American history and muck with US landmarks. But you went for it. Were you intimidated at all to write about the White House?

Naïvely, no, I wasn’t! I think I avoided that intimidation by keeping myself as close as possible to the intimacy of the story and holding the unbearable weight of the history at bay as best I could. That’s not to say that I wanted THE RESIDENCE to neglect its historical context, just not be overwhelmed by it. I told myself to tell a ghost story first and foremost, and let the ways that ghost story comments on and echoes through the history that precedes it to individual readers, at least for the most part. But having said that, I certainly know what you mean: American mythology is so much bigger and louder than perhaps any other nation’s—in some sense, “America” is more a mythological construct than a body of principles or sequence of inarguable events.

Thinking specifically about the White House, I see the place as the most intriguing and contradictory of Washington’s monuments. It’s a museum, a symbol of democracy, an aspirational palace, a high-stakes office, a visual backdrop for newscasts. It’s also a place where a (sometimes unwilling) family lives. The White House is the nexus point between the mythological and historical dimensions of America and the intimate, the familial. It sells itself as the “people’s house,” and yet it’s shrouded in secrecy. It’s also haunted as hell. The only haunted house its residents aren’t permitted to leave. I think seeing the White House as a haunted house was the key to writing THE RESIDENCE, not only in terms of genre or plot, but as a way of handling the subject matter without getting bogged down by the overwhelming and multiple meanings it holds in the national consciousness. 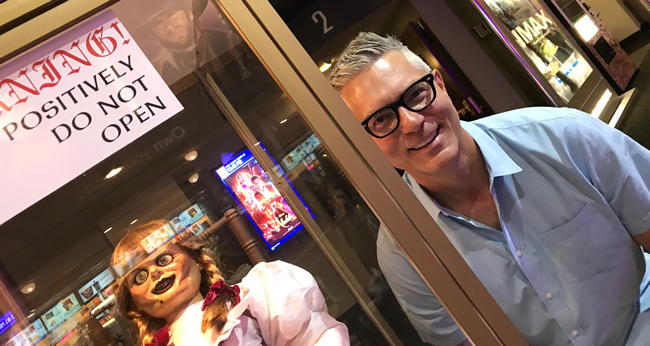 Pyper, an avid horror film fan, at the movies during the release week of the 2014 Conjuring franchise spin-off Annabelle.

Booklist calls THE RESIDENCE “genuinely creepy,” and I would absolutely agree. The Big Thrill is as much a publication for writers as it is for readers. What are the key factors you would advise writers to include in creating a suspenseful read?

There are many ways to achieve suspense in a long-form narrative, but I find it helpful to think about it in terms of questions and answers. On one level, there are the big questions that thread through the entire narrative (in a murder mystery it’s “Whodunnit?”; in THE RESIDENCE, it’s “Will the spirit(s) be exorcised?”). But just as important are the smaller questions one should pose in every chapter, every scene, every exchange. What’s behind the door where the strange voices can be heard? How will she convince her husband to change his mind? Is what he’s seeing real or imagined? Who will have the last word in this argument? The space between these questions, big and small, and their answers—this is where suspense lives.

THE RESIDENCE is obviously a compelling suspense read, but it also is a deeply emotional book, dealing with loss and sadness. How did you navigate this emotional landscape? 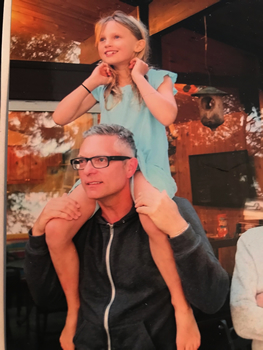 Pyper and his daughter, Maude, watch the sun “do something amazing before disappearing behind the trees.”

I’m a parent of two children whom I love more than anything. To create my Franklin and Jane required me to find access to their emotional situation upon taking up residence in a house neither of them especially wanted to occupy, at a moment in their lives when they would have been deeply distracted by loss. My job was to imagine what it would be like to lose all of one’s children at mid-life and then have to participate in the pageantry of politics, while also continuing to be part of a marriage, “moving on.” The Pierces’ situation must have been one of unthinkable pain, and yet the only ones who could have a chance of understanding it, speaking of it, were themselves. This was my way into the characters and the story itself: what was the secret that bound Franklin and Jane through their grief? How did their loss bring them together—what second contract did they make with each other? This was an act of imagination on my part, but one that forced me to dig around in the troubling waters of my own worst fears.

It’s tricky to include real historical figures with fresh characters—but you do that so well with THE RESIDENCE. What were some of the challenges—if any—that you faced?

I think the fact that Franklin is among the lesser known presidential figures was of assistance in not violating some fixed understanding of who President Pierce was or what he means to people today. There are gaps and questions about what motivated him and how he handled the tragic events of his personal life (and why he, famously handsome and desired, chose the physically fragile and troubled Jane as his wife) that other presidents don’t have, which allowed me the wriggle room to insert my own fictional bridges and answers and provocations. Because some of those inventions involve the supernatural, the challenge—especially when real historical figures are in play—was to keep the story plausible. For me, the test isn’t whether I can convince a reader that a ghost or demon is “real,” but whether I can convince a reader that the characters believe those ghosts or demons to be real. 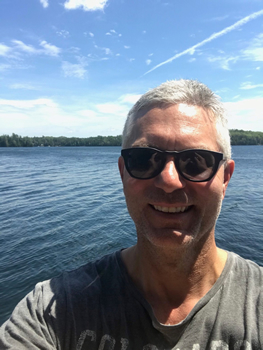 Pyper on the northern Ontario lake where he and his family spend their summers.

I didn’t realize that many think the White House is haunted—but I chalk that up to being Canadian. Do you think this is something the average American knows?

Having talked about the novel with various Americans in interviews and panels etc. now I’ve found that most don’t know that the White House is said to be haunted, and they certainly don’t know all the ways it’s haunted, for how long, how the supernatural narrative of the place is continuous and interconnected through the decades and administrations. Maybe some have heard about Lincoln’s ghost or some other touristy tidbit or two. But the richness of the White House’s supernatural history comes as a surprise to most.

I’ve been working on some things outside of novel-writing that I’m really excited about. There’s an audiobook and audio drama series, and projects on the TV and film side of things that I hope to be able to announce in the coming weeks or months. Maybe it’s the pandemic or maybe it’s just my own creative inclinations of the moment, but I’ve been especially attracted to these different mediums lately. It’s great to work with other people for a change, even if these meetings only occur by Zoom or on the phone. Being a novelist has always been a lonely practice, but these days have been even lonelier than usual. Nothing like pitch meetings with production executives (shave! shower! clean shirt!) to push the solitude away.