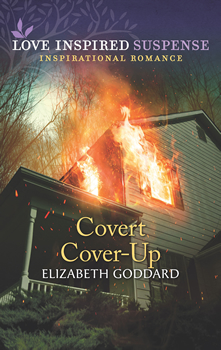 Elizabeth Goddard credits her mother’s overflowing bookshelves with kindling her voracious love of reading. From children’s books to classics far above her grade level, Goddard devoured them all. Perhaps it could also be said that they devoured her. Or maybe they simply filled her up until the only way she could find release was to spill those words out on the page in new and wondrous configurations.

With such a beginning, how could she be anything but a writer? It’s not only what she loves, but what she feels called to do. And with more than 40 faith-based novels written and a million copies sold, it’s clear that Goddard is determined to answer that call.

In her official bio, Goddard says, “A reader once told me that when she feels down, she picks up one of my books. She knows it will take her away from her troubles, at least for a while. That made me smile because I understand the need to ride on the winds of imagination. As a reader, I enjoy a novel that will whisk me away to another time and place.”

Goddard understands the importance of escape and entertainment. Stress can be deadly—even more so in these challenging times. Her stories, “set in unique locations and filled with adventure and suspense,” give comfort to her readers and a respite from the troubles of the day. Still, there’s more to what she calls her “ministry of words” than emotional sanctuary. Her greatest hope, Goddard says, is that her writing will not only entertain her readers but draw them closer to God.

Goddard makes no apologies for her faith. “I have the Lord to thank for giving me the dream to write novels,” she says, “and for making it come true…I encourage you to dream big, and follow those dreams He gives you.”

Today, Goddard is here to talk with us about her latest book, COVERT COVER-UP, a romantic thriller with a hero and heroine whose emotional wounds war with their desire for love. Goddard balances romance and suspense on the edge of a knife, even as she explores the complex interactions between faith and pain.

You’re known for your uplifting, faith-based stories. What are some of the challenges and rewards of writing for the Christian market?

The biggest challenge really has to do with adding the spiritual thread. Think about how complicated combining two genres—romance and suspense or mystery—and weaving those two together can be. In Christian fiction, I also need to weave the spiritual thread in as well. Though I do allow that thread to develop organically as I write, I still need to make sure it’s balanced with the romance and suspense and doesn’t overwhelm the story.

Without spoilers, can you tell us a little bit about your COVERT COVER-UP? What inspired it?

I had a lot of fun with this story. It started with one of those rare moments when I was actually feeling the creative muse. Ha! Setting always inspires me, and I had settled on Castle Crags near Mount Shasta. That’s when I knew my hero needed to be a world class rock climber. What could happen to him while he traveled the world that would change his life forever and bring danger to his door? The story starts after he’s entrenched in life as a father and a widower, his competitive climbing days behind him, and he soon discovers his deceased wife wasn’t who he thought she was.

Can you share with us a little bit about your writing process?

After 40-plus books you would think I would have a tried-and-true method, but I find that every book is different for me. Some books need more plotting and others I’m rather a pantser. I find that usually I’m somewhere on that spectrum between the two, not completely one or the other. Add to that, sometimes I use sticky post-it notes on a big white board, and other times I simply write out the plot on my computer. As a professional writer, I definitely have to write on a schedule. I can’t wait for the muse to strike or I would never meet deadlines.

Secrets and secrecy play a huge role in COVERT COVER-UP. What do you think this book says about the effect of secrets on family and romantic relationships?

Secrets can rip families apart or, at the very least, cause tremendous pain. I tried to show that when writing about the betrayal Beck experienced regarding his wife’s secrets, as well as his deep need to understand. He experienced utter desperation and wanted nothing more than to learn the truth and also to understand . . .  because if he could understand then he could forgive and perhaps even repair the rift. When someone is secretive or even betrays you, that doesn’t mean your ties to them are broken. You’re still very much linked emotionally and psychologically, and unfortunately, all of it has a ripple effect on every person connected.

My advice has always been to attend conferences to make the most important connections you can make to further your career. Even though most conferences have shifted to online this year, I still believe this advice stands. Make connections—mentors, editors, agents, and other writers—and constantly work on your craft. Read, read, read, and write, write, write.

I’m currently working on book four in Mount Shasta Secrets (LIS) as well as the second book in Rocky Mountain Courage, a new series for Revell.