A Locked Room Thriller for the 21st Century 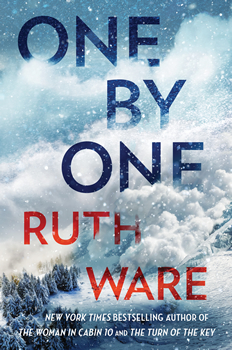 In the five years since she made her adult debut with In a Dark, Dark Wood, Ruth Ware has leaned into the Agatha Christie comparisons that have shown up in nearly every review of her work. In many ways, those references are spot-on. Like the Queen of Crime, Ware is a master (mistress?) of the streamlined cast and claustrophobic setting, the steady drip of clues, and the climactic reveal.

Those elements were wickedly deployed in Ware’s acclaimed debut, which, depending on the reviewer, was either the next Girl on the Train (Vulture) or the next Gone Girl (Surrounded by Books). Well-intentioned as they were, those comparisons didn’t do Ware justice. As the Sussex-based author has proven with every succeeding novel, from 2016’s high-seas puzzler The Woman in Cabin 10 to last year’s masterful gothic creeper The Turn of the Key, Ware has carved out a niche that is wholly her own.

Her trademark fusion of classic mystery and modern psychological thriller is on full display in ONE BY ONE, a story about a corporate retreat in the French Alps that takes a turn for the deadly when an avalanche leaves the group trapped and isolated, with a murderer in their midst. It’s been likened to Christie’s seminal And Then There Were None—a comparison Ware doesn’t particularly agree with, as you’ll read—and while it shares that classic’s ever-dwindling cast and confined, isolated setting, ONE BY ONE is a different beast altogether.

The story centers on Liz, a former secretary and current board member of a tech startup known as Snoop, and Erin, an employee at a chalet hosting an event for the company’s core team of decision-makers. The retreat is meant to settle a high-stakes debate: should the group sell Snoop, an app that lets subscribers eavesdrop on other users’ playlists, to investors for a large, one-time payout, or hold out for an eventual IPO? It’s a contentious question, and one of the shareholders goes missing even before an avalanche traps the others at the chalet without power or any way to call for help. Soon the killing starts in earnest, and the stage is set for a tense, twisting, paranoid narrative that will satisfy Ware’s fans and earn her plenty of new ones.

In this exclusive interview with The Big Thrill, she explains how ONE BY ONE finds her in new territory, what keeps her coming back to locked room setups, and why Agatha Christie might have cast a disapproving glare in her direction.

Probably the biggest difference for me as a writer was having two narrators. It meant I had to really keep in mind whose voice I was using in each chapter and make sure they were distinct so readers didn’t get confused, but it was also a huge amount of fun showing the same events unrolling from different perspectives. Erin and Liz have a lot in common—they are both outsiders who are uneasy with the behavior of some of the other guests. But they also come from very different places, and at different points in the narrative, each has information that the other isn’t privy to. It was really fun exploring the effect that had on their point of view and showing how they each construed the same events differently.

Which elements of And Then There Were None appealed to you so much that you wanted to write your own take on Christie’s classic setup?

I’m not sure if I would call ONE BY ONE my own take on And Then There Were None, exactly. The setup is very different and so is the reveal, and I’d be reluctant to portray it as some kind of rewrite. But they are both traditional locked room mysteries in the most literal sense—and those are extraordinarily fun to write (and, I hope, to read!).

We were seeing a resurgence of interest in locked room thrillers even before the entire world became one. What do you think is driving that revival?

I think as a writer, any kind of restriction you put on your writing or plotting forces you to become more creative. With a locked room novel, you only have the characters and resources you give yourself at the start of the novel. You can’t wheel on someone with handy expertise to solve a conundrum, or produce a deus ex machina to force a conclusion. You can only work with the materials you have, which creates interesting problems. Also, the small cast of characters means you have more chance to explore those characters really deeply. You end up spending a lot of time in their company.

Writers of modern-day locked room thrillers are tasked with finding creative ways to deal with technology. I’d love to hear your thoughts on centering your story on a tech startup that hinges on voyeurism and populating it with people whose lives revolve around technology.

It’s a bit of a cliché that the first thing a modern thriller writer has to do is find a way of isolating their character from their phone—because in the 21st century, we are never more than a few key presses away from help or expert information. And to some extent this is true, and it’s certainly something I leaned on in In a Dark, Dark Wood and The Woman in Cabin 10, where I deliberately put my characters in situations where they couldn’t rely on technology to solve their problems.

But it’s also given us so many other opportunities to explore—so many extra ways to hurt or surveil or exploit each other. I think we have a hugely ambivalent relationship with the technology we rely on; it’s a real love-hate thing. We love that when we type “Queen’s Head menu” in an internet search, the search engine knows that we mean the Queen’s Head pub just down the road from our house and not the one in Yorkshire. But we hate getting followed around the web by ads that know where we live and where we shop. Trying to disentangle when technology stops being helpful and starts being creepy is really difficult, and, as a society, we’re still trying to figure out what’s acceptable and useful and what’s just plain intrusive.

It’s a question that all the characters in the story are grappling with—how much information Snoop has on its users, how it uses that information, how you can maintain your privacy in an age where your phone knows exactly where you’ve been and who you’ve spoken to. I really enjoy exploring that Faustian bargain we make when we swap privacy for convenience and fun.

Your plots and setups are often compared to Agatha Christie’s, but your characters are markedly different. What do you think the Queen of Crime would make of the women who drive your stories?

I think she would probably have strongly disapproved of them! But I think she would also have had a lot of compassion for their struggles. Early Christie is very traditional and quite starchy—the settings are big country houses with servants and high society characters.

But in later years she did write a number of plots that look at people in more “ordinary” circumstances. Third Girl, for example, is about three young women flat sharing in 1960s London—and although Christie, via Poirot, is quite disapproving about the lifestyles of young people at the time, their scruffy clothes, dirty hair, and extra-marital relationships and so on, she is surprisingly understanding about the pressures on young people and the fact that in the end, everyone is just seeking a sense of belonging and security.

However surprising your endings might be, you always play fair with your readers—the answer was usually there all along. Do you have any pointers for seeding clues into a story without giving too much away?

I always know the ultimate solution to the mystery—I think it’s really hard to seed clues if you don’t know what the clues are supposed to be pointing to, and, while I’m sure you could accomplish that in edits, I think there’s probably more risk of the joints showing if you stitch it together afterward.

But in terms of what to reveal when and how to balance information with red herrings, I’m afraid I don’t really have a secret formula—I just go by instinct and tweak if I feel I’ve got things wrong or if my editors give me feedback one way or the other. I feel it’s kind of like asking a chef how they know how much seasoning to add. You go by experience and feedback, and I’m still learning and getting it wrong!

You published several YA novels as Ruth Warburton before making the leap to adult thrillers. What advice do you have for published writers looking to switch categories or genres?

Well, in some ways I feel like I’m a very bad person to advise on this because I didn’t sit down and decide to switch genres as a career move—I just had an idea that was begging to be written, and there was no way I could write it as YA. It was my new publishers who said that they felt a name change would be a good idea, so as not to confuse my teenage readers into picking up a book that was too old for them.

In many ways it felt like being a debut again—with all that’s good and bad about that experience. You get to reach a whole new audience—but you also have to venture out into uncharted territory without knowing whether you’ll find friendly faces there. As an experience, I would liken it a bit like going to a new school. There’s a lot that’s the same but so many unexpected differences!

Regardless, I’m so happy where I ended up. My only regret is that I’m so busy writing crime at the moment that I haven’t had time to go back and write another YA. There’s a lot I miss about writing for kids.

What’s getting you through the pandemic?

Finally, can you tell me anything about what’s next for you?

Obviously a new book. What else?!