On the Importance of Community 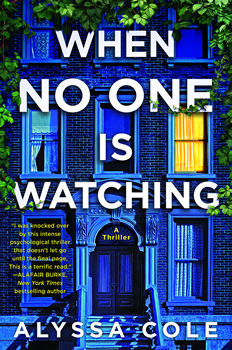 Bestselling author Alyssa Cole tells a timeless tale of culture and community torn apart by power and money with her highly-anticipated debut, WHEN NO ONE IS WATCHING.

When Sydney Green moves back to her Brooklyn neighborhood of Gifford Place, the changes shock her. The “landscape of her life is unrecognizable.” And now that her mother no longer lives with her in their brownstone, she feels lost.

“When I moved back a year and a half ago, carrying the ashes of my marriage and my pride in an urn I couldn’t stop sifting through, I thought I’d be sitting out here with Mommy and Drea, the holy trinity of familiarity restored-mother, play sister, prodigal child.”

But that didn’t happen.

Sydney notices that so many people are moving from Gifford Place, selling their homes to rich White people who’ve been told the area’s property values will skyrocket when the VerenTech company opens its new facility at the old community hospital.

It’s obvious the new people who’ve moved in don’t care about the neighborhood as it is—they want to make it better. And that means richer and whiter. Except for Theo, who lives across the street with his “Ponytail Lululemon girlfriend.” Although Lululemon seems to scorn everything about the old Gifford Place, Theo seems friendly. But as Sydney knows, that might just be for show.

Sydney takes refuge in learning Brooklyn’s history and plans to create her own Brooklyn tour. After all, the guide for the “Historic Brooklyn Brownstones” tour “wasn’t there to talk about Mommy’s community garden, or the time someone left a snake and some tarot cards on Ms. Candace’s stoop when they thought she was talking shit about them. They didn’t want an oral history of stoop usage.”

Sydney plans to tell the stories of the real people who’ve made Brooklyn home for so many years. She’s got a lot of research to do, and when the residents get together for a block party planning meeting, she’s not only shocked that Theo is there, but he also volunteers to help her with her historical research. She tells him, “You’re a strange White man who wandered into my friend’s house. Given what I’m reading about your people, maybe you’re here to claim it as your own.” But Theo shrugs, acknowledging, “The only thing I’m trying to claim is unemployment, and I’m barely managing that.”

Although Sydney thinks Theo’s “all up in the neighborhood Kool-Aid,” she reluctantly agrees to let him help. But they create a safe word—Howdy Doody—so she can let Theo know when he’s being “dangerously White.”

As odd things happen in the neighborhood and the old people and places are replaced by the new and improved, Sydney and Theo suspect there is something nefarious going on. Can they overcome the mistakes they’ve made and the secrets they’ve held close? And can they figure out what’s happening in Gifford Place before they lose everything, including their lives?

Cole poignantly reflects on the history of Brooklyn throughout the ages, beginning with European colonization, the Panic of 1837 when the slave market collapsed and Black men bought property so they could have the right to vote, the Draft Riots of 1864 when Black people in New York City escaped to Weeksville as they fled an Irish killing spree, and the razing of the neighborhood to build the Eastern Parkway.

With both humor and realism, Cole demonstrates how gentrification can exploit communities instead of strengthening them. This moving and profound story will enlighten readers about the dangers of improvement and the importance of community, while they try to unravel the dark forces at play.

Here, Cole talks with The Big Thrill about her inspiration for the novel, the plight of marginalized groups, and how community matters.

What inspired the story for WHEN NO ONE IS WATCHING? Why did you write about a woman giving tours that reflect the “real Brooklyn”?

I think you can look at American news right now and clearly see the inspiration: America is a country that has, on the whole, been absolutely and purposely terrible to marginalized groups, specifically Black people, and often gets away with it because society at large isn’t paying attention or doesn’t want to listen when they’re told what’s happening. All the protests, antiracist readings, calls to defund the police, and scrutiny of how Black people are told their lives don’t matter is what happens when people are watching.

The tour aspect was inspired by a few things. I wanted Sydney to have a reason to dig into history and understand how the past affects the present. But also, the neighborhood I grew up in had historical walking tours (after I had moved out), which felt odd and alienating to think about. I guess that seed was just waiting to be planted in the right story.

What is the key message you’d like readers to take away from the novel?

Things don’t just happen in communities. Almost anything you can think of—where houses and roads and supermarkets are built to what schools get money or what potholes get filled—results from a decision made somewhere down the line, a prioritization of who was important and who was expendable. Many of these decisions are stacked on the shoulders of similar decisions going back to our nation’s founding.

History isn’t the past (to paraphrase Faulkner), but is something that shaped and is still shaping the events of today. After they read the book, I hope people are a little more cynical about the world around them but also a little more interested in what they can do to change it.

Have you experienced your community turn into an “unrecognizable landscape”?

Most people who were born and raised in, or have lived for some time in, metropolitan areas have seen vast changes in their communities as real estate development and investment from wealthy people spreads.

What does it mean to you to write “inclusive” fiction (which we need now more than ever)?

It’s important to me that books portray authentic people. On some level, I’m just accurately reflecting reality while others are not, so we should ask them why they’re not writing inclusively. It seems much stranger and more pointed to write non-inclusive fiction. In some ways, you have to try hard to do that. It’s really people inadvertently writing alternate realities because our world has always been diverse.

Was it difficult to move from writing historical, contemporary, and sci-fi romance to a thriller?

Not particularly! Romance writing already involves laying down clues and solving the mystery of how a couple falls in love. I guess the major difference was paring down certain aspects of emotional exploration and letting the plot sit in the driver’s seat more than the romantic relationship.

Do you have advice for other writers?

It’s okay to be sad about rejection, which happens to everyone and continues to happen even if you’ve had success before. But don’t assume that if an agent or editor rejects you for one project, they won’t ever want to work with you. Also: stop scrolling social media and go write. (That’s also mostly my advice to myself.)

I’m a comics, manga, and anime nerd and have been since I was a kid. Outside of prose, some of my earliest influences are Rumiko Takahashi and Hayao Miyazaki.

On the Cover: Ruth Ware by April Snellings

On the Cover: Nancy Jooyoun Kim