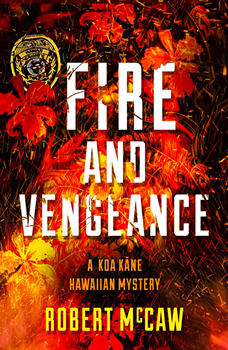 In the third and latest installment in Robert McCaw’s acclaimed crime series, Hilo, Hawaii, Chief Detective Koa Kane is called to a disaster scene that would horrify even the most jaded responder: an elementary school on Hualālai Mountain has exploded, killing four teachers and more than a dozen children. After learning that the school was built on a volcanic fault without proper safety precautions, Koa decides to confront the contractor, only to find the man dead. When the architect who designed the school is also murdered, Koa’s investigation leads him to a decades-old conspiracy—and forces him to make a choice that could have devastating consequences for his own family.

Attorney-turned-novelist McCaw recently spent time with The Big Thrill to talk about creating a compelling series character, writing about a culture that isn’t your own, and the thorny themes that inspired FIRE AND VENGEANCE.

For starters, can you tell me a little about the inspiration for FIRE AND VENGEANCE?

Several of my favorite themes came together in FIRE AND VENGEANCE. As any reader of the Koa Kane series must have guessed, I have long been fascinated by Hawaii’s volcanic nature. My stories involve lava tubes and active flows in scenes that often take place in Hawaii Volcanoes National Park. For FIRE AND VENGEANCE, I wanted a different volcanic venue. I chose Hualalai Mountain, an active volcano far outside the park that has not erupted in the past 200 years. In doing so, I wanted to highlight the terror an eruption can evoke when it occurs close to our everyday lives.

The way we humans fail to assess risk is another favorite theme. Ancient Japanese markers warned against the possibility of tsunamis at Fukushima, Japan. Still, the Japanese nevertheless went ahead and built the infamous nuclear power plant there. Thousands of people live on the slopes of Mount Vesuvius, which will one day erupt again. The same misperception of risk underlies the construction of a school over a volcanic vent in FIRE AND VENGEANCE.

The past often doubles back to govern the present, and FIRE AND VENGEANCE pursues this theme on multiple levels. A 40-year-old event motivates some of the present-day actors, and that history affects each of them differently, ranging from depression to exploitation.

Lastly, but importantly, the eruption in FIRE AND VENGEANCE helps make Hawaii more than just the setting for the story. As in all the Koa Kane books, I strive to make Hawaii, its history and legends, into a primary character.

This is your third novel featuring Hilo, Hawaii, Chief Detective Koa Kane. In your experience, what are some of the keys to creating a compelling series character? 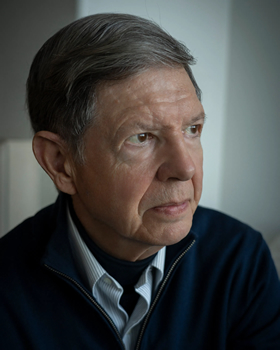 I’ve read hundreds of mysteries and am often put off by protagonists who are either superheroes or drunks and whose exploits defy believability. I wanted my protagonist to be smart, skilled, complex, and not without faults, but above all else, believable. Nor do I think that the detective protagonist should be a lone wolf. Most good detectives work closely with prosecutors, and Koa’s relationship with prosecutor Zeke Brown allows for the introduction of legal maneuvers beyond the province of a detective. Within those constraints, my characters need anchors. In Koa’s case, those are his ancestry, his relationships with his girlfriend Nalani, his devoted mother and wayward brother, his military experience, and his sense of duty, etc. If a protagonist is to come across as human, he or she must have insecurities. Koa entertains a fear of being outed for his past crime and worries that perps will outsmart him as he outsmarted those who investigated his own crime. Conflict shapes character. Koa faces conflicts with his wayward brother, his overly political police chief, local activists in the sovereignty movement, and the county’s incompetent coroner. Lastly, readers have to get to know and like (or hate) the protagonist. That requires the reader to get inside the character’s head, understand his or her thoughts, and experience the character’s fears, misconceptions, and moments of triumph.

As you get to know Koa a bit more in each installment, does he ever surprise you? How?

Although I’ve participated in many author interviews, none has posed this question, and it’s a good one. In developing the relationship between Koa and his wayward brother in FIRE AND VENGEANCE, I was surprised by Koa’s emotional reactions. You might say that I learned as much as Koa did in reconciling his past feelings toward his brother, his ancestral obligations, familial duties, and his gradual recognition that his brother was not the monster he’d previously believed.

Like many literary detectives, Koa is driven to seek justice by a deeply personal murder that haunts him. But unlike many of his counterparts, Koa himself committed that murder. What inspired that creative choice?

The decision to have Koa kill the man he believed had orchestrated his father’s death grew out of a comment by an early editor of Off the Grid, the second Koa book. The editor suggested that Koa have a more compelling motivation for his compulsion to seek justice. I had already written Koa’s anguish over his father’s horrific death into the book. I thought the reckless actions of a grieving teenager could produce a level of guilt that could drive Koa’s compulsion to find redemption by pursuing justice for murder victims.

Attorneys who become novelists often point out the similarities between the two professions—that both rely on the ability to tell a compelling story. What storytelling secrets did you learn from your years as a lawyer?

Both lawyers and novelists assemble stories like finely woven tapestries from dozens, if not hundreds, of separate threads. In a legal case, the provable facts and the lawyer’s ability to discover them constrain the narrative. There may be several different ways (i.e. stories) to arrange the provable facts. Still, the essential facts typically anchor and limit the options.  Creative writing employs the same assembly skills, but unlike the lawyer, the novelist gets to make up both the story and the facts that support it. That difference is wonderfully liberating, but freedom is not without limitations. At least for me, the story and each of the underlying events must be believable. Yet, in my experience as a lawyer, I encountered some pretty bizarre situations, and I’ve brought that knowledge to my novels. My legal life also introduced me to a host of fascinating characters, aspects of which appear in the actors throughout the Koa series.

What advice can you offer about writing a character from a culture that isn’t your own?

I knew when I decided to make my protagonist Hawaiian that I was accepting a burden requiring additional research and running a risk that I wouldn’t get it right. Yet, I wanted to tell readers about the real Hawaii, away from the “tourist Hawaii” created by the PR industry. To use Hawaiian phrases and delve into Hawaiian history and legend, I needed a Hawaiian character. To guard against errors and get the Hawaiian language right, I retained a Hawaiian linguist who vets the books for cultural inaccuracies.

How long do you see yourself writing Koa Kane novels, and do you have plans to step outside the series anytime soon?

There will be a fourth Koa book and maybe a fifth. I haven’t decided how far to take the series. I’m also dabbling with a wholly different setting and cast of characters, but it’s too soon to say more about that.

Can you tell me anything at all about Koa’s next case?

Koa will be back and sooner than you might think. Oceanview Publishing is reissuing Death of a Messenger, the first book in the series, in January. That edition will have some new details added for the reissued version. I’m also working on a fourth Koa book that will take my readers more deeply into Koa’s history as he tackles a new and traitorous conspiracy.

Finally, what’s been getting you through the pandemic?

I think it’s fair to say that Koa (along with my wonderful wife) has kept me sane during the pandemic. I can get up, get my morning coffee, and sit down at my laptop, ignoring the real world and its extraordinary problems. Add research, calls with my agent and publisher, and interviews like this one, and life sometimes even seems almost normal.

Robert McCaw is the author of FIRE AND VENGEANCE, Off the Grid, and Death of a Messenger. McCaw grew up in a military family, traveling the world. He is a graduate of Georgetown University, served as a US Army lieutenant, and earned a law degree from the University of Virginia. He was a partner in a major international law firm in Washington, D.C. and New York City, representing major Wall Street clients in complex civil and criminal cases. Having lived on the Big Island of Hawaii, McCaw imbues his writing of the Islands with his more than two-year love affair with this Pacific paradise. He now lives in New York City with his wife, Calli.