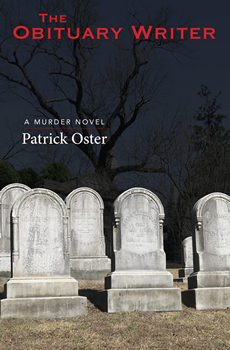 Writing obituaries might not be the most natural progression to fiction, but for Patrick Oster—who once wrote an obituary for the infamous killer, Charles Manson—his long-standing side job provided the perfect conceit for his newest thriller.

“I was working on another novel, a spy thriller, when this idea popped into my head and I mentioned it to my agent, who said it gave him goosebumps and I should do it,” Oster says. “At that point, I had drafted about 100 obits for people of a certain age, so I knew a bit about what obituary writers did, and I wove in some things I knew about insider trading, bankruptcy, and banking.”

The result is THE OBITUARY WRITER, a novel in which disgraced journalist Wallace McRae is asked to do a write-up on a chemist who appears to have slashed his wrists with a straight razor in his bathtub. Having just interviewed the man, Wallace thinks something else might be going on—and proving that theory just might be his chance to get a legitimate scoop and redeem himself as a journalist.

In this interview with The Big Thrill, Oster talks more about THE OBITUARY WRITER, what it takes to be one, and how the pandemic has put a temporary hold on his passion for travel.

What do you hope readers take away from this book?

It’s a rare look at obituary writing. At this stage in my writing career, in addition to having written five novels, I still keep my hand in journalism by writing obituaries for my last employer, Bloomberg News. Obits are short stories of the lives of rich or famous or awful people, and writing them gave me the idea for this yarn, whose principal character is a down-on-his-luck obituary writer who turns amateur detective.

What makes a good obituary writer?

You need to be able to sift through the chronology of a person’s life and see what the key themes were. Gloria Vanderbilt was a famous heiress, but after going through her fortune, she reimagined herself as a businesswoman, agreeing to put her signature on the butts of millions of her popular skinny jeans.

As an obituary writer for the rich and famous, what have been some of your most memorable?

I’ve done the obvious ones for Bloomberg News, which has an interest in billionaires like the late Paul Allen. But I enjoyed some of the unexpected assignments like madman killer Charles Manson, who had an unusual relationship with the Beach Boys, and Gloria Vanderbilt, who had a sad life despite all the money the “little rich girl” started with.

My most recent was John Lewis. A heroic life full of “good trouble,” as he put it.

In reporting, you usually tell readers the most important things up front. In novel writing, you keep your big reveals until the last minute. I did use a lot of actual news in all my stories, like the fall of The Berlin Wall as the backdrop for The German Club. I covered that and knew a lot about what was going on behind the scenes.

Travel is important to you, which must make this year exponentially hard. How have you satisfied that travel bug and altered your writing life over the past few months?

I had to cancel some trips to Sicily and Paris, where my girlfriend (actor, writer Kathryn Leigh Scott) and I had rented houses for some extended stays. Travel this year was limited to a January trip to the Turks and Caicos before the pandemic hit. I’m just finishing up two months of semi quarantine at Kathryn’s house in Beverly Hills, managing to tolerate the pool and tiki bar accommodations. Back to our digs in New York for the fall and winter.

I got involved in some marketing of THE OBITUARY WRITER including some radio, and I got back to that spy thriller, which I’m calling The Sleeper List. It’s a bit like a plot out of the hit TV series “The Americans,” but these sleeper agents don’t want to work for their Russian masters after the fall of the Berlin Wall, so they have to worry about eluding both their Soviet bosses and the FBI.

Patrick Oster, now writing fiction full time, was a managing editor at Bloomberg News and editor-in-chief of the National Law Journal. In his spare time, he still writes obituaries of rich or famous people. He has worked as a journalist for Business Week and the Washington Post in Europe, for the Knight Ridder newspaper chain in Mexico and elsewhere in Latin America and covered the White House, State Department, the Supreme Court, and the CIA as Washington Bureau Chief of The Chicago Sun-Times. He was also an assistant managing editor for the Bakersfield Californian. He is the author of the nonfiction book The Mexicans, a Book-of-the-Month-Club selection. His award-winning comic thriller The Commuter was published by the Argo Navis imprint of Perseus Books. He also wrote the spy thriller The German Club and the cyber-thriller The Hacker Chronicles. He also wrote the award-winning murder mystery The Amazon Detective Agency, His latest novel is the well-reviewed THE OBITUARY WRITER, another murder mystery. He is a member of the International Thriller Writers.

Fire and Vengeance by Robert McCaw

The Annihilation Protocol by Michael Laurence