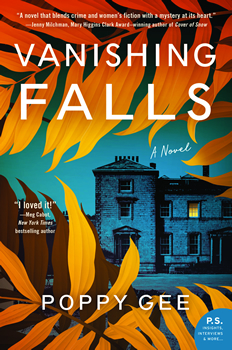 For the first 18 years of her life, Poppy Gee lived with her family on a small farm in Tasmania. For most of us who grew up on the US side of the pond, that name evokes the whirling mania of the Warner Brothers’ Tasmanian Devil or a grainy World Book Encyclopedia photograph of an elusive Tasmanian Tiger. For those who know the island firsthand, the reality is both contradictory and complex.

“The island of Tasmania, where I grew up, is a wild, beautiful muse,” Gee says. “Australia’s southern state is a picturesque place with a dark past. I am drawn to the contrasts: the delicate flora nestled beneath towering ancient trunks, the roaring rivers and tranquil rock pools, and the sleepy villages nestled beside vast, menacing forests.”

Filled with what Gee calls “a dangerous beauty,” Tasmania is the perfect backdrop for her stunning new novel, VANISHING FALLS. Set in a remote village in the Tasmanian rainforest, the book begins with the disappearance of a glamorous woman from her historic estate. “In this suspicion-riven town,” Gee says, “everyone is a suspect, everyone has a secret, and some people will do anything to keep those secrets safe. This is a dark, gritty story with a big heart in the shape of amateur sleuth Joelle Smithton who risks everything she cherishes to expose the truth.”

Joelle is a unique protagonist, a woman some might call “slow,” but with a high level of emotional intelligence. She’s an easy woman for her neighbors and even her loved ones to underestimate. Her innocent charm is a refreshing change from the sharp-witted, sharp-tongued heroines so common in the genre. Gee agrees. 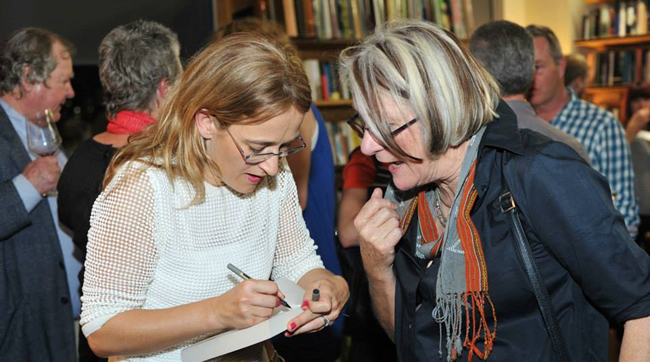 Gee signs a book for a reader at Berkelouw Books in Sydney.

“Writing a joyful character like Joelle is chicken soup for the soul,” she says. “The novel is dark and twisted, with complicated people plotting against each other, and Joelle is a ray of sunshine. She’s exuberant, happy, and kind, and she has a lovely relationship with her husband, Brian. Whatever she thinks, she says; and the consequences are always surprising. Everything about her is straightforward… until she finds herself in the wrong place at the wrong time.”

Gee wove together many different ideas in VANISHING FALLS. “Watching the nightly news always gives me ideas,” she says, “such as driving my curiosity about how husbands behave when their wives disappear. Oftentimes these grieving husbands, who beg for their wives to be found, are crying crocodile tears.” 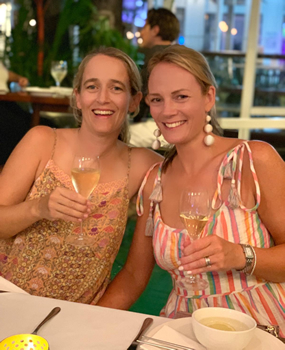 Joelle’s character was created in response to a news story about a vulnerable girl inadvertently caught up in a horrific crime. Gee was haunted by the girl’s story. “I was inspired to write a happy ending for her, where she has a beautiful family and belongs to a close-knit community. Unfortunately for Joelle, her fairytale ending takes a frightening detour.”

The global opioid crisis, which plays a pivotal role in the book, is another topic straight from the headlines. Cheap drugs, like methamphetamine, are becoming increasingly prevalent in Tasmania. Biker gangs bring them in through waterfront industrial towns in the north, as well as by airline and through postal service. “Small, quiet towns are disproportionately affected by ice,” Gee says. “Not just the users but also their families and the victims of drug-related crime. Lives are ruined and families destroyed.”

For Gee, writing a mystery is a fascinating way to dig up the secrets that everyday people want to keep buried: “the criminal exploits, duplicitous motivations, betrayals, gut-wrenching lies, as well as the astounding skeletons-in-the-cupboards of the most virtuous as well as the harsh truth of society’s sordid underbelly.”

She’s also intrigued by the complexities of friendship. “I’ll never forget watching a close group of friends imploding, with people choosing sides and severing years of friendship. Friendships can be as taut, passionate, obsessive, manipulative, and sometimes as deceitful as a love affair. In VANISHING FALLS, close relationships are complex webs in which people are at risk of being strangled by the sticky threads.”

Gee meets a reader at the 2014 Body in the Garden Festival in Adelaide, Australia. “This is a festival that combines gardening writers and crime writers held in the stunning Adelaide Botanic Gardens in South Australia,” says Gee.

Gee’s path from farm girl to published novelist was a circuitous one. While majoring in English at the University of Queensland in Brisbane, she worked in a beer garden, where she met a handsome carpenter who would later become her husband. Her official bio lists a variety of jobs in exotic locations. Not only has she worked as a journalist and editor in Sydney and Brisbane, she’s worked as a guest-house manager in Edinburgh, Scotland; a nanny, ski guide, and hotel cleaner in Switzerland; and a bartender in Portugal. She was even employed on a luxury yacht on the French Riviera until seasickness got the better of her.

This breadth of experience has served her well as a writer. It’s something she’d recommend to anyone who aspires to a writing career. “Having a broad life helps your writing,” she says. “It can take years to earn a steady income from writing, so a job that pays the bills is handy.” 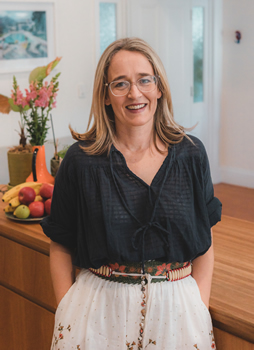 Asked if she has other bits of advice for aspiring writers, she narrows it down to one: Be persistent. “I think that if someone loves to write, they will do it anyway, but it is reassuring to remember that the one thing successful writers have in common is persistence.”

When she decided it was time to write a novel, the crime genre seemed like a natural fit. “When I was a child, I adored mystery novels—Enid Blyton’s Famous Five and Secret Seven, the Trixie Belden mysteries, and Holly Beth Walker’s Meg mystery series. These stories showcase remarkable settings and compelling characters as well as an exciting plot. There are many [elements] required for a mystery novel and, as a writer, I like the challenge of trying to combine them.”

She has three writing days each week when her youngest son, Teddy, goes to kindergarten. Of her typical writing day, she says, “I get my two older kids ready for school, they leave, and then I walk Teddy up to kindy. Between nine and two, I sit down at the kitchen table with my laptop and a coffee, and I write. I used to work full-time editing newspapers and magazines and teaching journalism at university, so at that time I would write early in the morning or late at night, usually for two hours a day. Lately, I’m polishing my current manuscript, making sure it’s perfectly ready to show to my agent.” 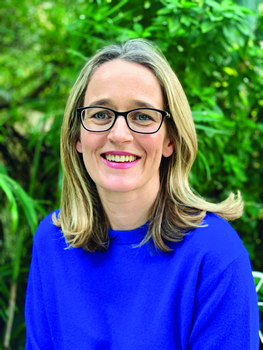 She calls herself happily disciplined. “I switch off my phone and rarely get distracted. I might take a quick break to make a sandwich or hang out the washing. I never get writer’s block; as writers with busy children and work commitments will relate, my challenge is that I feel like I never have enough time to get the writing done. Any chance to write is a luxury!”

Asked about her writing process, she says, “I am very organic with my writing, so my process is not efficient. In a perfect world, I would plot my book in bullet points, and write it as quickly as I can type. In reality, I let the writing flow freely—I write whatever occurs to me, letting the characters and the landscape drive the story. I never know the ending, so I write with the view that every character is guilty; and then at the end, I decide which person will be the actual villain. I write how I read: the excitement lies in not knowing what will happen next.”