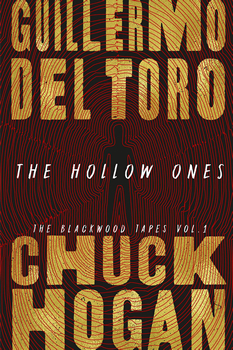 In the utterly terrifying opening scene of Chuck Hogan and Guillermo del Toro’s THE HOLLOW ONES, intrepid FBI agent Odessa Hardwicke must decide whether to make the career-ending decision to kill her partner—or watch him kill.

It’s an introductory chapter that immediately sets the reader’s expectations—an affirmation, of sorts, that this will be one hell of a thrill ride. The authors certainly don’t disappoint.

But for those familiar with their previous work—the successful Strain trilogy, which was later adapted for television—this won’t come as a surprise. THE HOLLOW ONES, book one in what is expected to be a new series, is the fast-paced, somewhat gruesome, supernatural-infused page-turner fans have every reason to expect.

Make no mistake, though—this is not a Strain copycat. With THE HOLLOW ONES, del Toro and Hogan have created an extraordinary occult detective novel that begins in bloodshed and, well…you know. There’s violence, yes, but the suspense is palpable.

After shooting her partner, Odessa is relegated to desk duty, taunted, and harassed by her peers. Sure, she shot her partner in self-defense, but the evidence doesn’t quite add up. She doubts her decision, her ability to do the job—and most of all, questions whether the shadowy figure she swears emerged from her dead partner is a figment of her imagination, or something much more sinister.

In this interview with The Big Thrill, Hogan—a successful writer and screenwriter in his own right—shares what it’s like to collaborate with an Oscar-winning filmmaker.

THE HOLLOW ONES is not your first collaboration with Guillermo del Toro. How did that writing partnership begin, and how has it developed over time?

I had never collaborated creatively with anyone on a novel before starting The Strain, but it was an amazing experience. Guillermo is (of course) open to any good ideas, and once we started growing out his initial outline, we never stopped. We have familiarity now, but also trust, so I feel we work even more efficiently on this series of novels.

What is your collaborative process?

We talk, then start an outline, grow that into a treatment, and then start writing pages.  Those go back and forth as they take shape. There are parts Guillermo enthusiastically claims for himself to initiate, which are frequently the best, such as the opening chapter of THE HOLLOW ONES.

In THE HOLLOW ONES, we’re introduced to a great cast of characters—Odessa, the mysterious Hugo Blackwood. Which of these characters provided the most challenge?

I think Blackwood himself, because he is the core of the story, and also because he is a unique character. THE HOLLOW ONES is in many ways a creation story for him, Odessa, and Solomon, and the challenge is to present them to the reader with enough personal information that they are complete by book’s end—and yet with a sense that there is much more to learn about them in future installments.

As a writing duo, you’re certainly not shy when it comes to putting violence on the page—this book is no exception, and of course, the story warrants it. What are some of the considerations for you when knowing how far to push these scenes?

There is no formula. You want to make the reader feel things, you want to establish what is at stake, you want a sense of menace and intrigue. It’s easy to go too far, and unsatisfying. Gore is tedious and pointless. We are far more interested in firing up the reader’s imagination.

Speaking of violence/horror…that opening scene. It’s deliciously terrifying! How was that scene conceived? Why was it important to kick off the book that way?

We wanted a set piece that introduced and simultaneously challenged Odessa. THE HOLLOW ONES is a less expansive novel than The Strain by design. But the opening was our chance to do shifting perspectives and locations before settling into the character dynamics. So glad you liked it!

THE HOLLOW ONES takes place over three timelines—an ambitious structure that you masterfully nailed. Was there one time period you enjoyed writing more?

We arrived at this unusual structure because it seemed the best way to tell our characters’ stories, challenging ourselves to tie it all together in the end. I personally enjoyed the 1962 section the best. We had no idea setting part of the book during the Civil Rights era would have such resonance here in 2020.

What kind of research was required to make both time periods come to life?

Reading, which is always fun. Writing novels is a great opportunity to learn things—and also to pursue topics that interest me. The John Dee sections were the most difficult to write, but he was a fascinating human and a great person to incorporate into our fiction.

I was a tremendous fan of the Strain series—books and TV. Are there any plans for a screen adaptation of this series? (Given your co-writer, I suspect many fans “expect” this without fully understanding the business.)

None! And thank you! I learned so much working on the TV series and collaborating with so many talented people, but I think I speak for Guillermo when I say that, on a personal level, the novels will forever be our favorite children.

As with the Strain series, you’ve dabbled in the supernatural with this book. I’ve heard it called an occult detective novel, but it feels more “fantasy horror.” In the end, it probably doesn’t matter as long as people are reading it. What draws you to the supernatural?

The opportunity to do so many different things. People think genre is limiting, but the opposite is true. A story with supernatural elements can cross innumerable boundaries.  As your questions reflect, we touch on history, on historical figures, on social issues past and present, on issues of race and gender, on romance, on mystery, on terror.

I’m excited that THE HOLLOW ONES will be the first in a series. What can you tell us about book two—including the vital question: when can we get it?

The only answer I am permitted to give is that all will be answered next year.