Paying Tribute to a Classic with an Unconventional Cozy 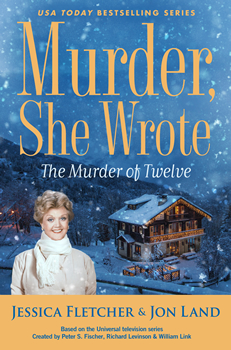 Author Jon Land and Jessica Fletcher pay tribute to Agatha Christie’s And Then There Were None in THE MURDER OF TWELVE (Book 51 in the Murder, She Wrote series).

A call for help interrupts Jessica, Doc Seth Hazlett, and Sheriff Mort Metzger as they eat breakfast together at Mara’s Luncheonette, waiting for snowflakes to fall. A deputy has found a body in a car on the outskirts of town. When Jessica and Mort arrive at the scene, they’re not sure who the man is, what he’s doing in Cabot Cove, or if his death was an accident or murder.

On the verge of “the storm of the century,” Cabot Cove braces for a blizzard that will deposit up to five feet of snow on the tiny Maine town. Even the “hardy bunch” of Cabot Cove residents aren’t prepared for this one. Jessica will spend a snowed-in weekend at the Hill House Hotel, where she’s been staying during her home’s rebuilding after a fire. But although she will be snowed in, she never expected the far-from-quiet weekend that follows.

Jessica assumes she’ll be the only guest at Hill House during the storm, but she finds she’s not alone—a wedding party of 12 is also staying there. She pities the bride and groom—there is no way their wedding will take place during a blizzard. When the bride and groom don’t arrive at the hotel, Jessica wonders if the storm waylaid them. But when someone poisons one of the other 12 guests, she knows something more nefarious is at play.

Stranded inside the hotel under feet of snow, Jessica and the hotel’s owner, Seamus McGilray—a former constable in Ireland—investigate the murders happening one by one around them—almost on the hour—trying to prevent more deaths in the process. The blizzard has prevented Mort and Seth from assisting, so Jessica and Seamus are on their own.

As their investigation continues, Jessica and Seamus uncover a tangle of secrets and lies hidden by many of the family members. Although Jessica’s “imagination serves her as well when she’s investigating a real case as when she’s inventing a fictional one,” she hasn’t been able to figure out the puzzle—so many odd-shaped pieces just aren’t fitting together. And Jessica concludes she might be one of the killer’s targets as well. She and Seamus must solve the murderous riddle before there’s no one left.

What inspired you to recreate the premise of And Then There Were None?

As a writer, I’m always looking for ways to both challenge myself and deliver a book to my publisher with a built-in marketing plan. So, creating a Murder, She Wrote version of the most famous mystery of all time for America’s best-known female sleuth was something I couldn’t resist. Jessica Fletcher enjoys almost 100 percent name recognition, as does Agatha Christie, so the concept seemed a natural. 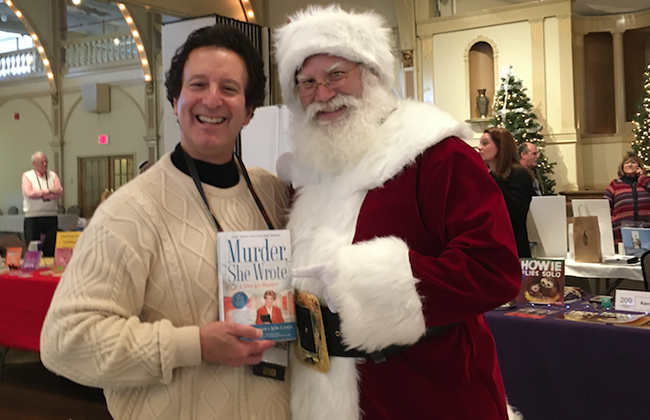 Land pauses for a photo op with a distinguished fan at the Rhode Island
Author Expo in December 2019.

I got the idea years ago after a fire damaged Jessica’s home, and she lived at Hill House, the local Cabot Cove hotel, for an extended period. Everything fell into place, and I’m getting such a kick seeing the book compared to And Then There Were None in the early coverage. I’ve set a high bar for myself, but that’s what writing is all about.

Is this the first Murder, She Wrote novel where Jessica is basically on her own in solving the crime?

Well, it’s the first one of mine for sure. I can’t speak for the 46 books published before I took over, since I made a conscious decision to use the television series as a jumping-off point instead of those other titles. Don Bain, who wrote the first 46 titles, had never watched the TV series, so his Jessica remains somewhat different from my portrayal of her. I’m basically writing her as Angela Lansbury while Don couldn’t because he wasn’t familiar with the show. I had a blast marooning Jessica in the midst of a killer blizzard with only her cell phone to rely on—until she loses service. I presented her with a series of challenges she’d never encountered before, although THE MURDER OF TWELVE was also inspired by one of the greatest episodes of the TV series, entitled “Murder Takes the Bus,” from Season 1.

Will Seamus McGilray be a recurring sidekick to Jessica in future books, or was this his only appearance?

Although he turned out to be such a vital character in the book, I have no plans to bring him back in a comparable role. 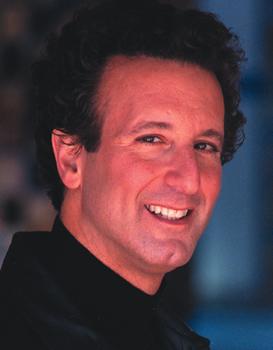 What might the next Murder, She Wrote novel be about?

Since I always deliver a book with a built-in marketing plan, I thought it was time to do a Christmas-themed Murder, She Wrote—mostly because I was tired of getting bumped off a bunch of mystery bestseller lists by all those green and red Christmas covers with candy canes on them. So, Murder in Season will be set over the holidays and—here’s what I’m most excited about—will feature a holiday visit from Jessica’s beloved nephew Grady, along with his wife and their son Frank, who’s named after Jessica’s late husband.

The light-hearted banter between Jessica, Seth, and Mort is like the witty conversations between Marshal Matt Dillon, Chester, and Doc on Gunsmoke. Was this dynamic originally based on the characters of Gunsmoke?

I’d have to check if any of the writers for the two series overlapped. But I think what you’re referring to is more of a general trademark all recurring series that last as long as Gunsmoke or Murder, She Wrote did. That’s also a point where my take on the series differs from the TV show. As some will recall, Seth Hazlitt wasn’t even originally part of the television series. And, after Ron Masak’s Mort Metzger replaced Tom Bosley’s Amos Tupper, he only appeared in a few dozen episodes because the series diverted to New York for a couple seasons and spent far less time in Cabot Cove after that. In the books, though, both Don Bain’s titles and mine, the old gang is always intact. And, as you’ve noticed, I include the crusty private eye, so brilliantly played by Jerry Orbach on the TV series, in every book now. His back-and-forth banter with Jessica is too rich to resist.

Can you list some hallmarks of a “cozy mystery,” versus other mysteries?

First, I resist labels. I’m not capable of writing a “traditional” cozy because nothing really happens. No plot, no actual story, no suspense, no pacing, no cliffhangers—in other words, all the things I’m good at, and in another word, boring as hell. I think the line between cozy and traditional mysteries has been shrinking; or, if it wasn’t, it is now.

Any writer of merit will bring his or her own take to a series they’ve taken over. And my take was to fashion a series that is as much a cozy thriller as cozy mystery in the sense that Jessica’s own life is often in danger, as in THE MURDER OF TWELVE. It’s no longer just about solving a murder; it’s about preventing others from happening. Not to offend, but I’ve considerably raised the stakes in my titles, while in traditional cozies, there are really no stakes. 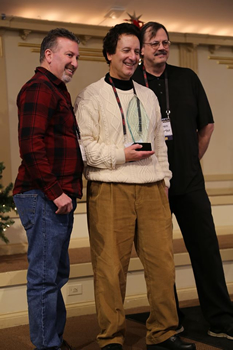 What advice can you give other writers, especially those unpublished?

I’d remind writers—published or not—that if you have a great story to tell, the rest will take care of itself. We’re storytellers, and we have to have fun telling a story. If you don’t love what you’re writing, how can you expect anyone else to love reading it? Love the story you’re telling to the point where you can’t stop writing any more than the reader can stop reading. That’s what I mean by having fun. Writing shouldn’t be labored.

Since you’re a “gym rat,” have you developed a work-out routine that doesn’t involve a gym during this time of self-isolation?

I have indeed developed a COVID-19 routine. About 30 years ago, I made what I thought was the worst investment of my life when I bought a home gym called a Soloflex machine. I only used it a handful of times before I joined a gym. Now all these years later, that Soloflex machine has become indispensable, going from the worst investment I ever made to maybe the best. For cardio, I’ve been getting outside and walking three miles on alternate days. The city of Providence closed the path I was walking along, so I mapped out a new one through the neighborhood using the sidewalks instead, along with the parking lane since nobody’s driving these days.