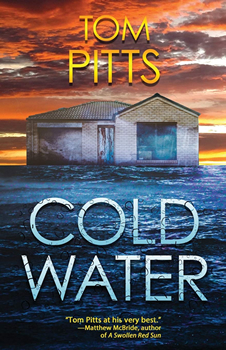 After a miscarriage, a young couple moves from San Francisco to the Sacramento suburbs to restart their lives. When the vacant house across the street is taken over by who they think are squatters, they’re pulled into a battle neither of them bargained for. The gang of unruly drug addicts who’ve infested their block have a dark and secret history that reaches beyond their neighborhood and all the way to the most powerful and wealthy men in California.

LA fixer Calper Dennings is sent by a private party to quell the trouble before it affects his employer. But before he can finish the job, he too is pulled into the violent, dark world of a man with endless resources to destroy anyone around him.

Author Tom Pitts recently met up with The Big Thrill for a wide-ranging interview about writing and his latest novel, COLDWATER:

It’s the fourth of my Northern California Quartet and I wanted to push outside the physical boundaries of the other three. The story ending up casting its net further than I expected and I ended up with a new landscape. I think the approach, the tone, the texture, and the result are very different from my other novels.

It’s my take on a horror story, but a horror story that could actually happen—the scariest kind. Everyone’s had that neighbor they’re suspicious of, who they imagine might be dangerous. I hope this plays on the worst of those fears.

Do you feel better now that you wrote it?

It was a dark and difficult time in my own life while I wrote COLDWATER. I took a lot of the pain and fear from my own life and vented it into this novel.

Denis Johnson, because of his chameleon voice and beautiful prose. Elmore Leonard, Johnny Shaw, Richard Lange, all because of their lean and straightforward style, and the respect for realistic human characters.

The evolution of the hero. It wasn’t who I thought would bring things to a head. It’s always fun when a story veers off on its own.

The setting. I was back and forth between San Francisco and Sacramento that year—three days in Sac and four in the city—and I wanted to write something that took place in the working class suburbs. Cities are so gentrified now, I wanted to show some of the grit that’s out there in the less reported-on ‘burbs.

There’s something compelling about a story that could happen to you. After I read Joe Lansdale’s Cold in July and Hot in December, I wanted to do my own take on the innocent average couple pulled into a waking nightmare.

Tom Pitts is a Canadian/American author and screenwriter who received his education on the streets of San Francisco. He remains there, working, writing, and trying to survive.