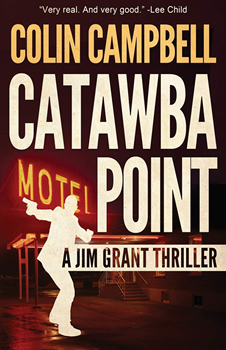 When Jim Grant’s flight home to give evidence about Snake Pass is canceled, he is diverted via Charlotte, North Carolina. But missing that flight too, he is forced to spend a three-day layover at a seedy motel on the outskirts of town.

All Grant wants is a good night’s sleep, but with a skinny hooker and her pimp causing trouble along the hall that isn’t going to happen. Maybe throwing the pimp over the balcony wasn’t such a good idea but the flying pimp is just the start of Grant’s problems. After a fire in his room and the hooker in the hospital, Grant is in the crosshairs of an ambitious detective. With the help of a local cab driver and the woman running a phone shop, he manages to learn what the pimp was really up to, leading him to a gang of white supremacists and their training camp at Catawba Point.

The Big Thrill caught up with author Colin Campbell for a quick chat about his latest thriller, book seven in the Jim Grant thriller series, CATAWBA POINT:

I love adventures. And I’m an ex-policeman. I can’t read UK crime fiction but enjoy the freedom of US thrillers because I don’t know the procedures. A bit like when reading Ian Fleming I don’t know any of the spy stuff but it sounds like fun.

Hard to say. Not the character, since this is Book 7 in the series. I think the location, because the beginning of the book happened to me. Most of it anyway. I was flying back to the UK when my flight was canceled and I was re-routed via Charlotte, North Carolina. That flight was delayed so I missed my connection and I had to stay at the only motel with rooms. (There really was a knitting convention in town.) And there really was a pimp and his girl in the stairwell. The plot grew from there.

The biggest challenge is always writing about America when I’m from the UK. That’s also the biggest opportunity because I get to immerse myself in a new place every time. Even if the Boston Globe did get pissed off that I put a strip club on Jamaica Pond.

Ex-army, retired cop, and former scenes of crime officer, Colin Campbell served with the West Yorkshire police for 30 years. He is the author of the UK crime novels Blue Knight, White Cross and Northern Ex, and the US thrillers featuring rogue Yorkshire cop Jim Grant.