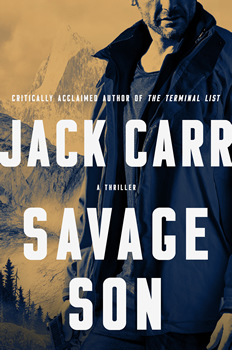 Only hours after his interview with The Big Thrill, Jack Carr was updating his social media with a thrilling new status—his latest book, SAVAGE SON, the third installment in his highly acclaimed Terminal List series, had just become an instant New York Times bestseller.

It’s a milestone certainly worth celebrating in a time when “celebration” is hard to come by, but for those following Carr’s career, the achievement is hardly a shock—it was only a matter of time.

Carr’s debut, The Terminal List, launched with serious acclaim from many of the genre’s top authors, and was nominated for ITW’s Best First Novel Award in 2019. Though he didn’t win, the book attracted the attention of Hollywood superstar Chris Pratt, who is both slated to produce and star in a television series based on Carr’s debut.

Not a bad start to what might be deemed Carr’s second career.

In his first, he spent 20 years in the US Navy, beginning his service as a SEAL Sniper before transitioning to multiple high-level roles. His travels have taken him across the globe, and that experience—coupled with his Navy skills—are woven into his fiction with a deft hand.

In SAVAGE SON, Lieutenant Commander James Reece is up against his most dangerous and personal mission yet. Still recovering from the trauma Carr put his hero through in last year’s True Believer, Reece becomes the target of a traitorous CIA agent who has found refuge with the Russian Mafia.

In this interview, Carr talks more about his new bestseller, his writing influences, and what’s ahead for Lieutenant Commander James Reece—providing he makes it out of SAVAGE SON alive, of course.

You’ve said that this book is something you’ve wanted to write since the 6th grade. Considering all you’ve gone through to get here, what advice would you give that 6th grader?

I’m glad I grew up in the pre-internet days with a mother who was a librarian and instilled a love of reading in me at an early age. I don’t remember a time when I wasn’t reading. It’s natural for me to always be in the middle of a book. I don’t think there has ever been a time in my life where I would not have had an answer if someone asked me what I was reading. Well, maybe boot camp because it’s not allowed—which is probably why I block that time in my life from memory. I’d tell that 6th grader to stay on the path…and maybe to pick up rugby a little earlier.

This mission for Reece is much more personal. How does his drive change from country to family? Or when you’re standing in battle with your brothers, are you always fighting for family?

You’re fighting for the team at that base level when the bullets are flying. By default you’re fighting for family and country, but in the thick of it, it is really about those to your right and left. Whether Reece is fighting to avenge his family, or fighting for his country, or for himself—these are themes that I will continue to explore. I’ve wondered my entire life why I was drawn to the fight. Was it love of country? Or something more? It’s a fascinating subject and now it’s something I can explore through the characters in my novels. Ultimately, Reece’s motives are up to the reader to decide.

Does Reece’s mental state change when the fights comes to him, instead of him being the hunter?

I don’t think so. He’s a professional. He is a normal guy you’d want to have a beer with, but then in the blink of an eye he can flip the switch and stack bodies because he has the training, experience, and knowledge to do so. When that switch flips, it’s all about the mission, and in his case, he accomplishes his mission with what I like to call “thoughtful violence.” In The Terminal List, he abandons the principles he’d sworn to uphold because he was free, free because he thought he was dying. In True Believer he needs to learn to live again. He needs to find that next mission, that next purpose. In SAVAGE SON he needs to make some decisions and the personal is blended with the professional. In it, I explore the dark side of man through the dynamic of hunter and hunted.

How isolating is it for Reece that people close to him keep getting hurt because of him?

I can only speak from my experience in special operations in that it has an impact. You lose people in combat and in training because the training is so inherently dangerous in and of itself. I think that’s why the books have resonated with people, because I’m not thinking about how my protagonist would feel about something, I’m taking the emotions attached to events I was involved with in Iraq and Afghanistan and then I’m applying those feelings to a fictional narrative so if they feel authentic and raw to the reader—that’s because they are.

In SAVAGE SON, Reece hones his skills with a bow. How are vets using this outlet at large, and how important is this weapon to Reece?

A lot of veterans are getting into archery, due in large part to guys like Joe Rogan who talks about it on his podcast, and guys like John Dudley and Cameron Hanes who introduce more people to archery than just about anyone else. It helps with focus, gets you outside and forces you to forget anything else that may be sucking you in, whether that is a past experience, relationship problems, work politics…it all disappears when you step to the line with a bow. I’ve been shooting a bow since I was five, so archery has been a part of my life as long as I can remember. I was always enamored with the tales of Robin Hood as a kid. I still remember my grandmother reading them to me and then watching the movie with Errol Flynn together. I’d ride my bike home from school, do hill sprints, climb ropes in trees in the backyard, do pullups on a tree fort we had, and in the middle of all that I’d shoot my bow, practice lowering my heart rate, controlling my breathing, focusing on the shot but not by concentrating, rather by letting the shot come. It was my attempt to be like the archers I’d read about in fiction and nonfiction. I’m sure other people were doing it before me but my only inspiration to train that way were the books I read and my imagination.

SAVAGE SON is dedicated to Brad Thor. How has he impacted your publishing journey and what was his best advice?

I would not be where I am today without Brad Thor. Brad would say that he cracked the door to the world of publishing for me and I kicked it in, which I sincerely appreciate. When we first spoke, I was about four months into writing The Terminal List and he told me, “the only difference between a published author and an unpublished author is that the published author never quit.” That really resonated with me because of my experience in BUD/S (SEAL training) and in the SEAL Teams.

You are an ambassador for the Rescue 22 Foundation. What do they do and how important to you is their work?

The Rescue 22 Foundation was founded by former SEAL K9 handler John Devine of Devine K9s and Erick Innis, a former Army Ranger K9 handler of Coastline K9s to help stem the tide of veteran suicide. To help those who have sacrificed so much for the nation, The Rescue 22 Foundation provides fully trained service and support dogs to veterans of our Armed Forces suffering from PTSD, traumatic brain injury, and the physical and emotional trauma of the battlefield. The data supporting just how much this helps continues to grow by the day.

Chris Pratt is said to be attached to a TV series based on the original Reece novel, The Terminal List. How is that process going?

I was able to advise on the pilot script and I absolutely love it!  I’m sworn to secrecy other than that.

Where does Reece go from here?