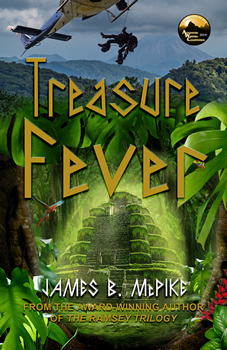 Max Finley is an American spy tasked with tracking down an old flame responsible for the theft of a rare 16th-century manuscript from Spain. Little does he know that she’s hot on the trail of finding the long-lost city of El Dorado, a place of magnificent gold wealth left by the Inca Empire and pursued for centuries by treasure hunters abroad. But it’s also rumored to be cursed after expeditions were lost and explorers tragically perished. As Finley reluctantly joins her quest, he finds himself mixed up in a deadly game of international espionage and intrigue where the powers that be will do anything to stop him.

James B. McPike took a few minutes to chat with The Big Thrill about his latest adventure thriller, TREASURE FEVER:

There were many things about the Incan culture and legends that I wasn’t aware of, specifically the recording device they created known as the khipu. I also was surprised about Pizarro, the leader of the conquistadors, and the overwhelming odds he faced to conquer the Inca Empire.

I wanted a new take on the age-old legend, something fresh and exciting to bring to readers. So what we have here is essentially a treasure hunt novel wrapped up in an edge-of-your-seat spy thriller.

The biggest challenge would be the research involved regarding the treasure and the locale settings. I wanted to do it right and make it believable to my readers. The biggest opportunity was presenting a new twist on the legend since there’s so much out there on it. I combined the backdrop of the iconic treasure with a Mission: Impossible or Jason Bourne-type plot to really stir things up.

Learn something new about the legendary treasure of El Dorado and hopefully have a lot of fun along the way.

Most definitely Preston & Child. To me they are the masters. I grew up reading their books and enjoy their writing style. It’s top-notch and eloquent at times, with historical secrets or supernatural mysteries I’m curious about. Also David Morrell, who in my mind is the best action-thriller writer.

McPike’s sixth action/adventure TREASURE FEVER: THE HUNT FOR EL DORADO was released in April 2020. It was named a Top-10 semi-finalist in the Adventure Writer’s Competition. Red City Review gave it 5 stars, calling it “a real goldmine of a book.” His last book, Shipwreck Island, was based on a real 19th century New Zealand shipwreck that went missing–along with its legendary gold cargo.

McPike’s previous mystery/thriller The Emerald Cave was the grand finale in the acclaimed Ramsey trilogy six years in the making. The book reveals hidden secrets about the Grail and where it might be today. The prior book in the series, The Lost Prophet, was the winner of multiple literary awards, including the Pacific Book Award for Christian Mystery/Thrillers and the Beverly Hills Book Award for religion fiction.

He is a member of the International Thriller Writers. His favorite authors are David Morrell, Preston & Child, and Charles L. Grant. He’s traveled the world from Switzerland to Aruba to New Zealand. In 1998 he was recognized with an Honorable Mention for the William Saroyan San Joaquin Valley Writing Contest. He lives near Yosemite, where he enjoys the great outdoors and wonderful local cuisine.