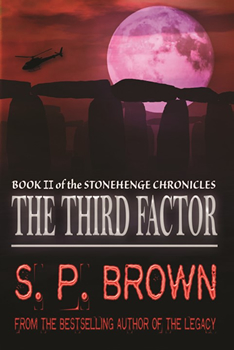 The enemy has recovered the lost Stones of Sumer and have managed to neutralize the Prophecy of Tarkus. And now the only person capable of deciphering the runes written on the ten stones has been captured. Madeline Alleyn will risk everything to keep the meaning of the rune stones away from her captor, but how can she when these people can open minds as easily as turning a page? She must keep their enigmatic message from her enemies. Her only hope lies in her daughters. Can they rescue their mother in time to prevent Prometheus Erazmos from gaining this knowledge? Stonehenge is the key, but what terrible secrets does this ancient monument hold?

The Big Thrill caught up to author S. P. Brown to ask a few questions about the writing life and his latest thriller, book two in the Stonehenge Chronicles, THE THIRD FACTOR:

There is a large sci-fi element to this paranormal thriller with some real science involved.

Tolkien, Connelly, Grisham, Butcher, Pullman, Rowling. You may notice that all of these authors represent a different genre. My reading is wide and my writing is invariably mixed genre in each book.

Who built Stonehenge and more importantly, why?

Can’t answer it. You’ll just have to wait for the end of THE THIRD FACTOR and the full reveal in the last of the trilogy.

Twists and turns always surprise me. After a bit, the characters take over and write the book for me.

An appreciation for mixed-genre works.

A fascination with the fantastic and the subject of the trilogy, the origin of Stonehenge.

Stanley P. Brown always had heroes as a child. Born in Plaquemine, Louisiana, to Joseph Harry, a painter, and his wife Vivian, a homemaker, these heroes mostly took form in his big brother, Harry, and those populating the pages of Marvel Comics. Realizing he didn’t have the right stuff to be a superhero himself, he concentrated on academics at Louisiana State University and the University of Southern Mississippi, where he earned his doctorate in Exercise Physiology. He went from there to his first academic post at the University of Mississippi. Others followed, as did many scientific publications and several textbooks. But the call of storytelling remained strong in him, and he answered that call with publication in 2017 of his debut novel, The Legacy. Veiled Memory and Fallen Wizard followed in 2018. The Third Factor, the sequel to Veiled Memory, is next in line. A fourth fictional world is currently being created, and he has sequels planned for all of his novels.