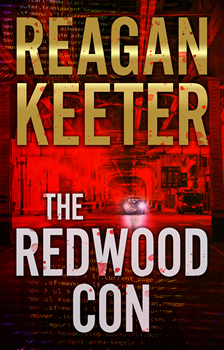 Reagan Keeter brings us a crime thriller that packs a punch in his latest book, THE REDWOOD CON.

Liam Parker finds his girlfriend, Elise, dead in the bathtub, wrists cut. Suicide, he figures. But the truth turns out to be more complex than anyone might expect. While trying to clear his name, Liam uncovers clues that suggest Elise was living under an alias, has a record, and lied about where she worked and where she grew up. Making matters worse, his relationship with her has tied his fate to those of a conman and a stockbroker, neither of whom he has ever met. And as these three men’s lives hurl unexpectedly toward each other, Liam learns he’ll have to do more than just prove he’s innocent—he’ll have to unravel a mystery that threatens to destroy everything he cares about.

The Big Thrill recently checked in with Keeter to learn more about this thrilling new tale.

Tell us about your main character, Liam Parker. What has his journey been like up until now?

Liam grew up in a family that might barely be called middle class. He got married and divorced, he had two children and, after the divorce, was relegated by the courts to being a part-time father. Except for the fact that he started a successful business with his friend David some years back, he is unremarkable by design. I like to tell stories with characters we can all relate to. (If you can’t see yourself in Liam, you can almost certainly see someone you know.) Then I like to push those characters to find out who they can become. I think stories like that remind us we are all great, that we don’t need somebody else to save us, that we are capable of saving ourselves and working together to save each other.

I wrote my first book at 15 after reading Sphere by Michael Crichton. It was preceded by several false starts in a variety of genres, none of which held my attention long enough to see all the way through. The idea that did was a paranormal thriller. I stayed in that subgenre for a long time. I still write paranormal thrillers under the name Gabriel Burns, with one book under said name published by TouchPoint Press. It wasn’t until after I got married and my wife asked me to write something she could read that I dropped the “paranormal” from “paranormal thrillers.” I’ve never given any thought to the reality that this book—and the next two planned for release—are indeed crime thrillers. I just follow the ideas that I find the most intriguing.

As with any good story, I think your antagonists need to be relatable; ideally, even if you disagree with their choices, you can understand why they make them. You also need to raise a question in the reader’s mind early on, one they feel compelled to get answered, and one that grows in complexity as the story unfolds until, at last, they find out what ties all these events together. In particular, I like to play a lot with secrets—those we keep from each other and ourselves.

The novel is told through several perspectives. This is done, in part, to help the readers understand each character’s inner world and motivation. As the story unfolds, I like to think the readers will come to see even the bad guys as people they can understand if not relate to. And maybe, because of how they will come to understand these characters, they will at least pause for a moment before drawing conclusions about someone they don’t know. That is something I think the world could use more of, in general.

In this book, someone needs to get into a locked computer that isn’t theirs. This is something I researched for authenticity. I was surprised to learn that with a little knowledge and the right tools, it is far easier than you might expect.

How is the concept of justice related to the book?

Most of my characters, good or bad, are concerned with finding justice, as they define it. I think it’s an interesting question and one you can only answer for yourself. I thought it would be fun to see how entirely different people might approach the question and how those individual quests for justice might change when confronted with each other.

Reagan Keeter is the author of the psychological thriller Buried and a National Indie Excellence Awards finalist. He has worked as a writer and editor at Georgia newspapers. He has lived in Bucharest, Prague, Manchester, and Chicago, but is now back in his hometown of Atlanta.

April 27 - May 3: "Can you discuss the term 'high-concept' and provide examples?"