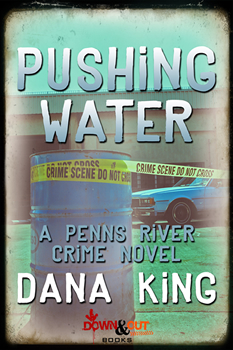 Just because Penns River is an economic backwater doesn’t mean it’s immune from current events. An active shooter at a local discount department store leaves several people dead and the shooter in the wind. Maybe. It’s hard to say as the man arrested at the scene definitely shot someone but claims to be a Good Guy with a Gun.

Meanwhile, a Canadian fugitive lands in town and pulls a job to tide him over while his cache of cash makes its way across the border. He and his partner—a local just dumb enough to serve a purpose—see an opportunity and begin a robbery spree while the police focus on clearing the mass shooting.

The usual small-town hijinks still go on: There’s a robbery in the new strip club, an old woman wanders off, a domestic situation that starts as an argument over cookies turns violent, and the widower of a past victim needs attention. The Canadian Mountie who came to town hunting the fugitive may be helpful or more trouble than he’s worth.

Penns River’s economic status may be static, but the level of mayhem seems only to increase.

The amount of crime, especially violent crime, that now exists in the areas where I grew up. Maybe it always did and I was living in the bubble that school and a strong family provide. I felt a little guilty about how I depicted the area when the first book was about to come out. That was about the time I started to read the daily reports from the local paper online. I take some literary liberties, but not as many as I thought. For example, there have been more cops killed in the line of duty there since Grind Joint came out than I have killed in my books.

I think the biggest challenge any book in a series faces is how to keep things fresh. That’s also the biggest opportunity. It’s a reason to dismiss some characters, bring in new ones, and experiment with different ways of telling the stories.

That there are hundreds—maybe thousands—of smaller towns like Penns River where only the economic downturns seem to have any effect. I want to keep these towns in people’s minds.

I also want readers to remember that police forces have competing priorities. What we see on almost all cop shows and books is a single crime, as if the rest of the world has taken a break so the cops can work this case in a vacuum. That’s not the way it works.

The characters and setting are pretty well in place when writing a series such as the Penns River books, though the cast of characters does evolve over time. This can be both a blessing and a curse. A blessing because I already have the universe in place for the story; a curse because there are sometimes story ideas I like that have to be set aside because there’s no way to fit them into Penns River. That shows the benefit of writing two series: sometimes a story originally planned for one works better in the other. That was the case with Resurrection Mall, though I wish it hadn’t taken me almost 40,000 words to figure it out.

The conflicts involve outwardly ordinary people resolving matters of freedom and imprisonment, life and death. No superheroes or big explosions, but not a series of pedestrian domestic events that happen to everyone, either. Anyone in such a book could live next door, but what happens to them isn’t the kind of stuff anyone thinks of happening next door.

I’ve had quite a few over the years but find Joseph Wambaugh and Dashiell Hammett influence me more as I go along. Wambaugh for his gift for showing “how the case works the cops,” to paraphrase his term, and for using side anecdotes to help characterize and richen the setting. Hammett’s prose was concise without being sparse and never sounded like writing even though the use of language is often brilliant. It’s less like reading and more like having the story and characters imprinted directly on the brain. I’ll never get there, but that attitude is key during edits when seeking the balance between “Do I need this?” and “Does it still read smoothly?” The one constant influence has been Ed McBain, who pretty much invented the procedural and whose writing incorporates as many or more good elements as any writer who came before or since.

Dana King writes the Penns River series of novels, of which PUSHING WATER is the fifth. His Nick Forte private investigator series has earned two Shamus Award nominations from the Private Eye Writers of America, for A Small Sacrifice and The Man in the Window. His work has appeared in the anthologies The Black Car Business, Unloaded 2, The Shamus Sampler 2, and Blood, Guts, and Whiskey. He is a member of the International Thriller Writers, Private Eye Writers of America, and Sisters in Crime.