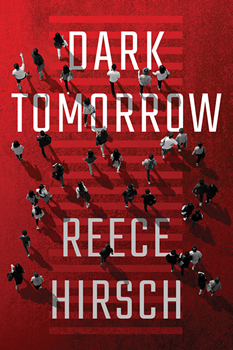 FBI special agent Lisa Tanchik is skilled at handling cyber threats, having recently taken down a Dark Web black market worth billions. But ruthless hacker NatalyaX always seems to be a step ahead.

The government calls on Tanchik’s expertise when an email attachment causes a fatal seizure at US Cyber Command. But before she can get her feet under her, the entire East Coast goes dark. A sinister plan is unfolding before her eyes—and no one knows who’s behind it.

Tanchik plunges into chaos to hunt down the true source of the attacks. Close dealings with shadowy figures both online and off expose her to extraordinary danger as the country teeters on the brink of catastrophe.

A soldier on the front line of a cyberwar, Tanchik must nullify the threat before it deals a death blow to America’s institutions—and puts millions of lives in jeopardy.

Author Reece Hirsch took some time to chat with The Big Thrill about his latest thriller, DARK TOMORROW, the second installment in his Lisa Tanchik cybercrime series:

I learned a great deal about how the US Cyber Command operates, but I obviously did not gain admittance to the war room. I had to use my imagination and extrapolate from what is publicly known to paint a picture of what it’s like to be in CyberCom’s war room when things hit the fan.

I hope readers will be as frightened as I am by the prospect of what an all-out cyber attack on the United States could look like. While the US has not experienced true cyberwarfare, smaller-scale attacks are happening every day. DARK TOMORROW explores those routine skirmishes turning into something more deadly.

I was surprised to learn that some malicious hackers use malware containing a strobe to induce a seizure in persons with epilepsy. That tactic is used to cause a CyberCom analyst to experience a fatal seizure in the first chapter of DARK TOMORROW.

DARK TOMORROW starts where a lot of thrillers might end—with a massive cyber attack on the East Coast. In my book, that’s just the starting point as Special Agent Tanchik plunges into the chaos to track down a hacker who could be the key to learning who is behind the attack.

Reece Hirsch is the author of six thrillers that draw upon his background as a privacy attorney. His first book, The Insider, was a finalist for the International Thriller Writers Award for Best First Novel. Black Nowhere was the first book in a series featuring FBI cybercrime investigator Lisa Tanchik, followed by DARK TOMORROW. His three prior books, The Adversary, Intrusion, and Surveillance, all feature former Department of Justice cybercrime prosecutor Chris Bruen. Hirsch is a partner in the San Francisco office of an international law firm and co-chair of its privacy and cybersecurity practice. He lives in the Bay Area with his wife and an Ewok-like Brussels Griffon.