From Writing Headlines to Making Them 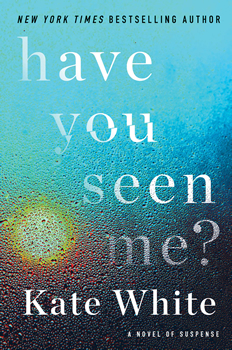 For more than 14 years, she served as the editor-in-chief of Cosmopolitan, one of the highest-selling women’s magazines in the world. A publication that truly understands the power of a well-crafted headline.

It’s been more than seven years since White retired from that position, but headlines continue to play an important role in her career—it’s often where her book ideas come from. At least the initial germ.

Things went a little differently this time around, though: the idea for HAVE YOU SEEN ME? came “out of nowhere,” White says. “I was sitting here thinking about memory loss one day, and all of a sudden the idea was there. The ending was even there. It was like dominoes, one idea led to the next…”

The novel—White’s sixth standalone thriller—introduces readers to Ally Linden, a finance journalist who, in the book’s opening scenes, is clearly having a bad day. Outside in the rain, she fumbles for the access card to get into her Manhattan office building. She’s eventually let in by a co-worker she doesn’t recognize, but she can’t get into her personal office because she’s forgotten her keys.

Her day goes from bad to worse when her boss arrives—he’s confused as to why she’s even there. Ally hasn’t worked in that office for more than five years.

In the chilling chapters that follow, we learn that there are significant gaps in Ally’s memory—48 hours’ worth, in fact. She remembers her name, but not much else. It’s not until she arrives at the hospital that she begins to piece together a few important details—she’s a freelance journalist, living with her husband, Hugh, in Manhattan’s Upper East Side. It’s a good start, but there are still two whole days of her life that are just…missing.

The doctors claim Ally has experienced a “dissociative state.” She accepts the diagnosis, but what triggered it? This is, of course, the mystery both Ally and White’s readers must solve—and the twists and turns to get us all there are incredibly well crafted and believable.

This level of authenticity is in part due to an experience White had while working at Cosmopolitan. She’d pulled her back out—likely a stress-related injury—and the osteopath she visited said, “Tell me about the accident.” He was referring to an x-ray showing that White’s neck was “vulnerable”—an injury consistent with someone who had dived into a pool with no water.

White had no recollection of any such accident—and neither did her mother— but “It made me wonder: did something traumatic happen to me as a child, something I don’t remember?”

The incident stuck with White for several years, and when she started working on HAVE YOU SEEN ME? she recalled this experience, as well as a story she’d read about a woman who’d been found alive, bobbing in New York’s East River.

“She’d disappeared a week before, and couldn’t remember why she’d taken off,” White says. “She had no understanding why this had happened to her.”

“I usually do a lot of research,” White says, another byproduct of her former career as a journalist. “Harlan Coben once told me that research is a form of procrastination. It can be. But I still like to check things out.”

For HAVE YOU SEEN ME? White solicited the advice of her daughter’s friend, a therapist who specializes in clients who have had similar experiences as her protagonist. With her help, White was able to create a believable diagnosis and treatment plan for Ally—but the character herself was a bit of a work in progress.

“With Bailey, you know she’s 100 percent reliable—she’s never lied to you,” White says. “Sometimes she’s a little confused, or has to tell white lies when interviewing people to get the quote, but she’s fundamentally honest.”

Ally is…a little less so. That’s not a deterrent, though—far from it. White is a master at creating sympathetic characters, and from the first pages of the novel through to its impressive twist ending, Ally is likable, relatable, and compelling. As are her interactions with the novel’s other key players—Ally’s therapist and her husband, Hugh.

White is known for creating fantastic male characters, and the dynamics of Ally and Hugh’s relationship are breathtakingly real. Growing up with five brothers gave White special insight into the male psyche, and her job at Cosmopolitan provided further learning.

“One of the things I learned is how different men are from women,” she says. “I think we sometimes still believe that if we give men enough white wine, they’d be more like us, but that’s not the case. We did hundreds of surveys with real guys—and asked them how they felt about dozens of topics. Sex. Food. Relationships. Men just communicate differently. In some ways, they’re more complex than women.”

That complexity is woven into Ally and Hugh’s relationship, providing a necessary layer of character development without slowing down the pace. In fact, the novel moves at breakneck speed, something White is particularly proud of. She’s both an avid reader and a binge-watcher of thrillers, often taking time to analyze what gives something that “must finish now” quality.

“I look at how long sentences are, how many pages are in a chapter,” she says. “These days, your pacing has to be a lot faster than it was when I started writing novels in 2015.”

Of course, that’s not the only thing that has changed—and in 2020, when COVID-19 has impacted the publishing industry in immeasurable ways, White has learned to adapt­—a skill she’d already honed while navigating the tumultuous magazine world.

“It’s a challenging time,” she says. “I did have to cancel the book tour, but there’s so much opportunity to do things online.”

Indeed, many authors in the genre have banded together to cross-promote each other’s works—Instagram takeovers, Zoom interviews, virtual tours. This is becoming the norm—and for many authors, like White, it’s an opportunity to connect with even more readers than what’s possible in a more intimate bookstore event, for instance.

It’s also a good time to write—which is part of White’s plan, regardless of when things get back to normal. While she hasn’t abandoned her Bailey Weggins series altogether, she’s just handed in a new standalone thriller to her editor and is toying with a couple of new ideas, neither of which are a good fit for her series character.

Of course, that could change.

“I was working on something entirely different when the idea for HAVE YOU SEEN ME? came to me,” White says. “Once in a while, you hit on a pot of gold.”

White may not be able to predict when that happens, but here’s one prediction we can certainly stand behind—readers are going to love HAVE YOU SEEN ME? It’s available now.