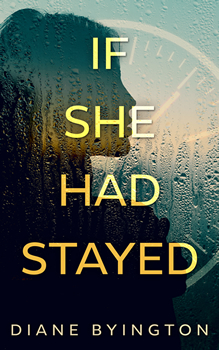 A kind word you wish you’d spoken. An angry word you wish you hadn’t. The lover you still wonder if you should have let go… Who hasn’t wondered what would happen if you could go back in time and change an action or event you regret? If you could, would you? And perhaps more important, should you? That was the question author Diane Byington set out to answer in her second novel, IF SHE HAD STAYED.

Byington says, “Kaley, the protagonist, finds some notes written by Nikola Tesla . . . in which he describes his experiments with time travel. She goes back into her past to see if she can change the decision in life she regrets the most. Of course, things don’t turn out as she planned.”

She says the story “sort of rolled out” in her mind one day when she was playing with the idea of whether she would go back to change things she regretted in her own life. “I tried to de-emphasize the science fiction elements. Time travel isn’t the purpose of the book, it’s merely a technique to give Kaley a chance for a do-over. The mystery is if she’s able to do it, and if that’s really a good thing or not.”

If success means filling your cup to the brim, it’s hard to imagine Byington having many regrets. She’s been a college professor, yoga teacher, psychotherapist, and executive coach. At the other end of the spectrum, she once took a job cooking hot dogs for a NASCAR event. Her leisure activities are equally varied. She loves to kayak and weave. In fact, she once owned angora goats and still enjoys spinning their hair and weaving it into bookmarks, which make unique and personal gifts for her readers.

The Big Thrill had a chance to catch up with Byington about her research and writing processes, the challenges of writing about time travel, and her focus on the issue of regret.

Tesla had one of the most intriguing minds in recent history. Did you already have a fascination with him when you began IF SHE HAD STAYED?

I knew a little about Tesla, but I ran into one of his works at the Boulder Public Library. I had no idea he’d lived in Colorado Springs, so I dug in and just kept getting more fascinated. I figured that, if anybody could have discovered time travel, Tesla would have been the one to do it.

What kind of research did you do?

I read everything about Tesla for about a year, and particularly studied his own writings so I could learn to copy his style. The novel has five journal entries supposedly from Tesla in which he describes his experiments. Learning about him was a huge amount of my research. Then I read everything I could about time travel, both fictional and science-based. It took a long time to learn everything I needed to know in order to write this story.

How did you deal with the inherent challenges of writing about time travel?

Dealing with the time travel aspect was definitely the most challenging part of writing the book. Because time travel isn’t real, except in fiction, an author can make it any way she chooses, but it has to be consistent within the confines of the book, and it has to be at least a little bit believable. First, how does the person get back or forward in time? At first, I used a real invention of Tesla’s, but then I realized that someone might actually try it and get harmed. So I created something that Tesla could have invented (but didn’t) to use as a way to get to the past.

I thought that going to the past would be more interesting than the future, because who knows what the future brings, anyway? And then there was the question of what to do if the person from the future meets their past self? It turned out to be the central question of the book, as Kaley from 2018 meets her younger self. I loved figuring out that puzzle. Most authors dodge the issue of meeting the past self, and I understand why. It’s a major puzzle to work out, but it was the most fun of everything in writing the book.

You’ve said you were interested in exploring the concept of regret in this book. How did that decision influence the events of the story?

Kaley believes she made one mistake when she was in college that changed everything in her current life. She feels stuck in her life and can’t get past it in her mind. She thinks of herself as a dud. Going back allows her to decide in the moment whether she wants to make a different decision. There were things she hadn’t considered that she finds when she gets back there.

What was your writing process?

I wrote the first draft of this book during NaNoWriMo, which is in the month of November. The idea is to write as fast as you can so you can write an entire book during that month. I managed the first draft in about six weeks, but, oh, it was terrible. I can’t even put together how many drafts this one went through before it was publishable. Still, I can’t imagine anything I’d rather do.

What advice would you give to aspiring writers?

Get as much help as you need. Find a critique group, beta readers, editors. I really don’t think writing publishable prose is an easy skill to learn by oneself, so get help. And read all you can, all the time, no matter what genre it is. And keep at it. Hardly anyone’s first book actually gets published.

I have a wonderful women’s fiction/locked room thriller that I’m finishing up. It’s about an astronaut who gets hit by a truck shortly before a space mission. She’s severely injured, so she gets fired. But she is desperate to get to space any way she can, even to the point of getting involved with some questionable groups. I love this book!