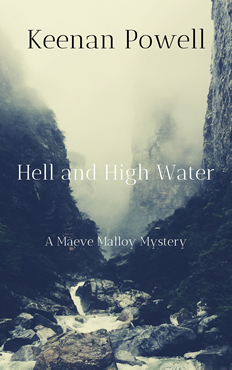 Alaskan attorney Maeve Malloy isn’t sure she’s cut out to be a lawyer anymore. So she takes a kitchen job at a remote lodge while she sorts out her life, hiding her past from her new friends. As a storm rolls in, a tourist is murdered. There is no escape and no rescue in sight.

When the police ask Maeve to investigate, her cover is blown, and her new friends aren’t so friendly anymore. To find the killer before it’s too late, she must expose their deepest secrets, sort lies from truth, love from hate, and the innocent from the guilty.

The Big Thrill spent time with award-nominated author Keenan Powell discussing her latest Maeve Malloy mystery, HELL AND HIGH WATER. Here’s what she had to say:

The book is set at a fictional lodge at a real place in Resurrection Bay, Fox Island. The artist Rockwell Kent lived there in 1918-1919 and painted several landscapes you can find online.

Books and writers that have influenced me include Charles Todd’s A Fearsome Doubt, which dances upon a knife-edge of truth. I’m greatly enamored with the Quirke series by Benjamin Black and the Sean Duffy series by Adrian McKinty. Breathtaking writing from both these authors and darned good plotting and characterization too.

Is your work autobiographical?

Yes, it all comes out of my head and heart.

Yes, there was, but I can’t tell without spoiling.

I’m hoping readers will take away from this book the concept that justice is not a universal and that by attempting to enforce one’s own brand of justice, new transgressions are committed.

What I love about this genre is the ability to sink into characters’ psyches and explore how they got where they got.

Keenan Powell is the award-nominated author of the Maeve Malloy Mystery series. Her first publication included illustrations in Dungeons and Dragons, 1st edition, while in high school. Art seemed to be an impractical pursuit—she wasn’t an heiress, didn’t have the disposition to marry well, and hated teaching—so she went to law school instead. The day after graduation, she moved to Alaska. As a young pup, she provided criminal defense representation in a variety of cases spanning from the infamous federal walrus round-up case to murder. When not writing or practicing law, Powell can be found oil painting or studying the Irish language.