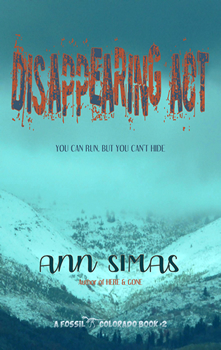 The second book in Ann Simas’s Fossil, Colorado series, DISAPPEARING ACT, is a compelling story about the tenacity of the human spirit. The protagonist, Georgie Flannery, is an empathetic character who is courageous and independent but has trust issues and therefore relocates frequently.

In an effort to find a sense of permanence, with the Rocky Mountains as her only criteria, she uproots herself for the sixth time in eight years and heads toward Colorado. At the border she obtains a map and decides on her “forever town,” but soon discovers getting there won’t be as easy as she thought.

With her love of learning and research, it’s no surprise that Simas is a respected author of 27 novels, one novella, and a short story collection, or that three of her novels were Romance Writers of America Golden Heart Finalists. She is also an award-winning watercolorist and a budding photographer who enjoys cross stitch.

In an exclusive interview with The Big Thrill, we get to the heart of all the qualities that Simas’s novel embodies: entertaining, well thought-out, and full of insight.

What author has influenced your writing the most, and why? Is there a specific book they’ve written that has impacted you more than others?

When I think back about all the authors I’ve read over the years, I’d have to say that Dean Koontz probably influenced me most. Whether writing under a pseudonym or his real name, he has a consistency about his work that intrigues me. When he began writing under his real name, he was classified as a horror writer, a tag he hasn’t been able to shake. To my way of thinking, he writes cross-genre fiction. That’s something editors and publishers shy away from, but readers love. Koontz inspired me to write the cross-genre books I wanted to write. Obviously, I haven’t reached the level Koontz has with his books, but I remain hopeful. (I’m smiling.)

When you wrote your first book, what did you believe was the most important thing you needed to do to achieve success?

The first book I wrote is tucked away on a shelf in my home library. It was a learning experience and a reminder of where I started. The next book I wrote went on to be an RWA Golden Heart Finalist. I thought for sure it would open doors for me in the romance genre. I knew my writing was good, but being a good writer, I soon discovered, isn’t enough. If it was, authors with poor writing skills wouldn’t be getting published. My expectation of success has been modified since then. I write because I feel compelled to write and I love it. I have endless stories bouncing around in my brain waiting to be turned into a book. DISAPPEARING ACT is my 30th book in print. To me, that is success. People reading my books and enjoying them is the icing on the cake.

You’ve had a number of books published—has the way you write changed over time? If so, how?

Like most budding authors, I took writing classes, attended workshops and conferences, and tried really, really hard to write like I was taught. The problem was, the way all the how-to books and instructors wanted me to write didn’t work well for me. One day, I was so frustrated, I made a life-altering decision. No more synopsis, no more chapter outlines, no more character sketches.

I get an idea for a book and I jot it down in a document I call Book Ideas. When I start writing, I know who my two main characters are and I have a general idea of where the book will end. Instead of researching ahead of time, I do it while I’m writing. I maintain a Characters document, which contains basic info on all my characters, along with business names and so forth as they appear in the story. I also make research notes in that document. That’s it, and it works for me.

New ideas constantly occur to me as I write, so even though I think a story is going in one direction, it could veer off in an entirely new direction. Usually, this happens because I discover something totally unexpected when I do my research. It feels really good not to be hamstrung by “writing rules,” and my writing is much better for it.

Since DISAPPEARING ACT is set in the Centennial State and you consider yourself a “Colorado girl,” did you know exactly where you wanted the story to take place without doing much research?

Every book I write takes place in either Oregon, where I live now, or Colorado, where I grew up, with the exception of my Christmas romance series, which takes place in Christmas Valley, Anywhere. DISAPPEARING ACT is a sequel to Here and Gone, released in 2018. The prime setting is Fossil, Colorado, a town I created. It’s located in Pike County, which I also created. I’m familiar with all the other locations in the book—Woodland Park, Estes Park, Colorado Springs. I know the terrain, the weather, and the surrounds. That said, even though you know a place, there’s still research to be done.

What was the inspiration for DISAPPEARING ACT?

While I was writing Here and Gone, I thought it would be fun to write books featuring Noah’s brothers and his sister. Readers also asked for sequels, so I decided, why not? Once I settled on a storyline for DISAPPEARING ACT, I realized I’d started another book that would be the perfect beginning. As often happens, where I initially thought the book would go turned out to be not where it actually went, but it’s still an exciting thriller, with a love story and another great golden retriever.

I’ve read you feel it is important for your novels to be accurate even though they are fiction. How long did the research for DISAPPEARING ACT take to complete?

When I started writing fiction, I got lost in researching. I love learning new things, so for me, it was easy to research instead of write. There were times when I had to force myself to stop with the research and focus on writing the book.

These days, since I almost always do my research as I write, it’s difficult to say how long it takes, but basically it depends on the book and the subject matter. Thinking back, it could be a few minutes or an hour. It’s important to me that I get my facts straight, which means my research gets as much time and effort as it takes. I’ve taken forensics and criminal investigation classes at the local community college, done a ride-along, and visited the county morgue and the state crime lab. Sometimes I need to read an entire reference book to educate myself. For example, last year, I read a book written by Dr. Allen Hynek, who was involved in Project Blue Book. I wanted a firsthand account of UFO investigations before I started writing a mystery that included UFOs.

Were there any unique experiences associated with researching or writing DISAPPEARING ACT?

It’s always a challenge to write about something new, which for me is why every book I write is a unique experience. DISAPPEARING ACT is no exception. Georgie’s running from something horrible. For eight years, she’s hidden in one state or another and is on her way to Fossil, Colorado, a town she hopes will be her forever home. She takes a wrong turn and something bad happens to her, but it also brings Brant into her life.

A plot twist occurred to me about two-thirds of the way into the writing of this book. I vacillated at first with my decision to switch gears, primarily because I was uncertain how readers would take it. I suppose that plot twist was my secondary unique experience. For spoiler reasons, that’s as much as I can say about it.

You wrote your first fiction “book” while you were in high school—did you know at that time that you wanted to pursue a career in writing? If so, what did you do after high school to further your career path?

I’ve always loved writing, in any form. When I went off to college, I thought I wanted to be a journalist. I’d been editor of my high school newspaper and co-editor of the state Latin newspaper, so it seemed like a no-brainer. I’d also written poetry in high school (who doesn’t?) and some short stories. I still have the book I started writing, too, although when I found it, I realized I hadn’t made as much progress as I remembered. In high school, my English teacher informed me she was going to be harder on me than she was the other kids, because she knew I had “what it takes.” I dedicated one of my books to her.

I graduated college, got married, had kids, and didn’t start writing fiction until many years later. I joined RWA in the early ’90s because I thought I wanted to write romance. Three of my books finaled in their Golden Heart competition, but when I submitted them to editors, it was always the same story: too much mystery, not enough romance. Finally I said to myself, Write a mystery! So I did, and the Grace Gabbiano Mysteries were born. It wasn’t until I no longer had a stressful day job that I was able to really focus on fiction writing.

What would you tell an aspiring author NOT to do if they want commercial success?

The don’t list is long, but it’s pretty much the same if you’re traditionally published or an indie. Don’t start writing without a plan. Don’t skip rewrites or editing. Don’t skip proofreading. Don’t write what everyone else is writing—be creative, including with your title. Don’t go with only an e-book version; many people still want paperbacks. Don’t format your own work, for e-book or paperback, if you have no idea what you’re doing. Don’t create your own cover, for the same reason. Don’t forget that the promotion for your work lies with you, unless you’re Danielle Steele or James Patterson. Don’t forget to send out news releases announcing your new book; send to every newspaper where you’ve lived or gone to school. Don’t forget to make an author page for yourself on Facebook. If you’re really into social networking, also set up a Twitter and Instagram account, and whatever else is popular these days. For heaven’s sake, don’t write because you want to make tons of money. Writing is a labor of love, but unfortunately, it’s not usually big in monetary paybacks.

Ann Simas lives in Oregon, but she is a Colorado girl at heart, having grown up in the Rocky Mountains. The author of 29 novels, one novella, and one short-story collection, she particularly likes to write a mix of mystery/thriller/suspense, with a love story and paranormal or supernatural elements. Three of her books have been Romance Writers of America Golden Heart Finalists.

Simas is also an award-winning watercolorist and budding photographer who enjoys needlework and gardening in her spare time. She is her family’s “genealogist” and has been blessed with the opportunity to conduct firsthand research in Italy for both her writing and her family tree. The genealogy research from centuries-old documents, written in Italian, has been a supreme but gratifying and exciting challenge for her.