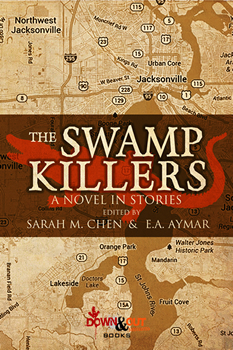 Everybody loves a good sequel to a good original—and hat is what Sarah M. Chen and E. A. Aymar have delivered with SWAMP KILLERS: A NOVEL IN STORIES.

Following on the story originally begun with 2018’s The Night of The Flood, SWAMP KILLERS: A NOVEL IN STORIES provides 16 separate but intertwined sequels from 16 expert thrill-weavers.

The tales all start off with the same premise, beginning in the aftermath of The Night of The Flood. Timmy Milici, a low-level hitter with the infamous Atlanta-based Duplass crime family, ran off with Melody Duplass to Jacksonville, Florida. Olivia Duplass, her mother and head of the Duplass family, has put a price on Timmy—$100,000 for his corpse—but with explicit instructions that her daughter not be harmed.

Editors Sarah M. Chen and E. A. Aymar sat down for a nice chat with The Big Thrill about narcissistic greed, selfish ambition, and raw revenge that all flows back to the beginning, with a cold twist that will make you look twice.

I remembered being impressed with The Night of the Flood. Not often do short story anthologies continue with sequels. What inspired this follow-up anthology?

Sarah M. Chen: We all enjoyed working together for The Night of the Flood and wanted to do it again. Through Facebook chat, we threw around some ideas and eventually came up with the premise of a young couple in love and on the run. They steal a sizeable amount of money from a crime family and bury it in a swamp. Allegedly.

How did you all get to know each other?

E. A. Aymar:  Mostly it was through ITW. A number of us write for The Thrill Begins, and we all became friends and fans of each other’s writing. J. J. thought it would be a good idea for all of us to work on a joint project together, which led to The Night of the Flood. We needed even more voices for THE SWAMP KILLERS, given the breadth of the story, and we reached out to writers we admired and wanted to work with. We were all friends and in the same writing circles prior to this project, which made it nice. The complexity of this project and its many facets are much easier when you’re working with people you like and want to support.

How did you coordinate your stories to ensure none contradicted another?

Chen: This was definitely tricky to coordinate, much more so than The Night of the Flood. Because we had such a tightly plotted storyline with four recurring characters, we had to ensure that the central narrative thread made sense while allowing each writer to add their own spin on it. Exploring the idea of “what is truth?” and “what really happened?” brought the anthology together in a unique, fun way.

When most Americans think “crime families” they tend to imagine New York, Chicago, New Jersey, or Boston as opposed to Southern cities. What led you to set these tales where you did?

Chen: The swampy setting was something we all wanted to play around with, which is how we ended up with Florida. The typical crime family storyline is, as you say, set in a northeastern urban location like New York or Boston. We wanted to steer away from the cliché, which is how we came up with a Southern crime family living in Atlanta, Georgia.

I loved the descriptions and use of the Georgia and Florida countrysides and swamps throughout the stories. Are any of the contributors actually from those areas?

Aymar:  Thank you for saying that! The closest is J. J. Hensley, who lives in Savannah and is familiar with that stretch of highway and land leading down to Jacksonville. With The Night of the Flood, we wanted to pick someplace where a number of our writers lived, and several of those contributors were from Pittsburgh, which was north of our fictional town of Everton. But we tried something different in this book and used a realistic place that we had to imagine. In that way, it fit in with our theme of “questionable storytelling.” Also, Jacksonville, Florida, just seems like a place where bad things happen.

Will there be more in the storyline in the future?

Aymar:  I don’t think so? But I’m not sure. I’d originally envisioned this as three books, but the editorial process is exhausting. I’d kind of like to see a third and final book, but I think that’s because Sarah and I both have recurring characters from the first book in the second. And my characters have a third, final arc waiting. But if we don’t do a third book, then I’ll finish their story somewhere else.

And now for the one question that delves deep into the collective minds, souls, and spirits of the team behind the story. You and all of the writers of SWAMP KILLERS are meeting in a private restaurant in Manhattan during ThrilerFest and the restaurant you are in is suddenly and forcefully taken over by a group of international hitmen, some dressed like bikers, some like ninjas, some in nice suits, some looking and smelling like hobos. All seem very dangerous, but none particularly smart. Your phone buzzes with a text message. Pick one or two cartoon characters from the 1960s or ’70s Saturday Morning Cartoons. They will be the ones to rescue you and help you escape.

Who/What will you pick help you out of this dastardly dilemma?

Chen: I’d be Jayna of the Wonder Twins and yell “shape of a poison dart frog!” The poison dart frog can secrete enough poison to kill up to 10 men. Zan is pretty useless since he can only turn into a form of water and I never understood why Jayna didn’t ditch him. I guess he could be a tidal wave and flood the restaurant, but a poison dart frog is way cooler.

Aymar:  Oh man, I don’t even remember those cartoon years. I’m going to have to bump up to the ’80s and take a Transformer, since he could defend me and then drive me away. And I’d also take Fat Albert. He wasn’t terrifically fast, so if the Transformer thing didn’t work, I could outrun him and leave him for the bad guys.

Sarah M. Chen has worked a variety of odd jobs, from script reader to private investigator assistant. She’s published numerous short stories and a children’s book. Her noir novella, Cleaning Up Finn, with All Due Respect Books, was an Anthony finalist and IPPY Award winner. She’s the co-editor of The Night of the Flood, and is a sometimes contributor for the Los Angeles Review of Books.

Of E. A. Aymar’s The Unrepentant, Publisher’s Weekly wrote, “gut-wrenching…readers who appreciate depth of character alongside gritty nonstop action will be rewarded.” His past thrillers include the novel-in-stories The Night of the Flood (in which he served as co-editor and contributor). He has a monthly column in the Washington Independent Review of Books, and he is also the Managing Editor of The Thrill Begins. He was born in Panama and now lives and writes in the DC/MD/VA triangle.