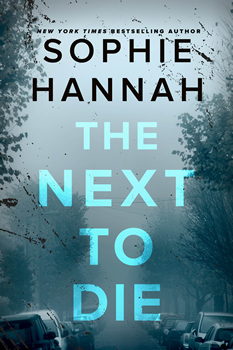 Sophie Hannah’s not a stand-up comedienne… yet. But she gets to play the part in her newest thriller, THE NEXT TO DIE.

In it, comedienne Kim Tribbeck finds herself center-stage in a string of homicides that have an unusual twist—the murdered couples are all best friends. But Kim has no friends; according to her, her comedy is her only useful contribution to society. So why in the world has the killer, dubbed Billy Dead Mates, apparently targeted her?

The high-profile murder investigation has England both horrified and fascinated. Billy Dead Mates bestows a small notebook to his intended victims, the pages blank except for one verse of poetry. Then they die.

Because most of the victims are women, feminist journalist Sondra “Misogyny Kills” Halliday ramps up the tension with accusations that detectives appear to ignore Billy being a sexist woman-killer. A police task force, including husband and wife duo Simon Waterhouse and Charlie Zailer (from the Zailer and Waterhouse mystery series), work to unravel the riddles while trying to prevent Kim’s murder. But will they be able to solve the mystery before the killer strikes again?

The star of the novel is Kim Tribbeck—her snarky sarcasm and jaded outlook on life will have readers laughing from the first page. Hannah confesses she was somewhat living vicariously through Kim’s character—and she had fun with it. 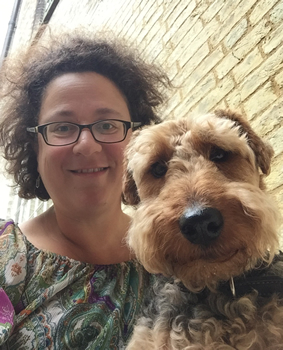 Sophie Hannah and her dog, Brewster

“When I do an event—at literary festivals, theaters, bookshops—people often come up to me afterwards and say, ‘Have you ever thought of becoming a stand-up comedian?’ I haven’t, but I started to like the idea of writing about a comedian with a really savage, sarcastic sense of humor,” she says. “I thought to myself, ‘If I were a comedian, what kind of routine would I have? What kind of jokes would I tell, and how would I use past pain to fuel my performance?’ That’s how Kim Tribbeck came into existence.”

Although THE NEXT TO DIE has a comedic vibe, the story also explores some deep feelings in relation to real-life situations. Hannah even included some of her personal experiences.

“I wrote the novel very soon after my dad died,” she says. “Kim’s experience in the hospital at the beginning is loosely based on mine in very similar circumstances.”

In the novel, Hannah also depicts some quirky facets of human behavior—what normal people might do going through extreme situations. Tribbeck expressing her isolation growing up as an adopted “good will project” also rang true to personal experience.

“My books don’t really have messages that I think out in advance—I’m more interested in creating a picture, in each novel, of humans and how they behave in extreme situations,” she says. “Looking at the novel now, though, I suppose the message might be ‘Don’t underestimate what people are capable of—both good/impressive and bad/terrifying.’” 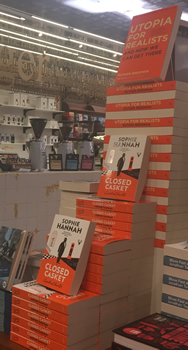 In addition to her multitude of mysteries and thrillers, Hannah has taken over authoring Agatha Christie’s Hercule Poirot series.

“It started off as my agent’s idea,” she says. “He was having lunch with an editor at HarperCollins, and they were talking about taking on contemporary writers such as Joanna Trollope and Val McDermid to write versions of Jane Austen classics. My agent knew that HarperCollins was Agatha Christie’s publisher and suggested that if they were doing that sort of thing, they should get me to write an Agatha Christie novel.

“Before I knew it, I was invited to a meeting with two HarperCollins editors. I told them about an idea I had for a historical detective novel. Soon after that, I was called for a meeting in London at the offices of Agatha Christie Ltd, where I met Agatha Christie’s grandson and great grandson, Mathew and James Prichard. I felt a bit embarrassed being there at all—I would never have put myself forward to write a Poirot novel, if my agent hadn’t suggested it; it wouldn’t have occurred to me—but Mathew and James were keen to hear my plot. When they seemed to like it, I thought, ‘Yikes! Now I actually have to do this.’ But it was the most exciting creative challenge I’d ever been offered and I couldn’t (and didn’t want to) resist.”

Hannah is also a self-proclaimed self-help addict and decided to write her own unique self-help book, How to Hold a Grudge: From Resentment to Contentment—The Power of Grudges to Transform Your Life. 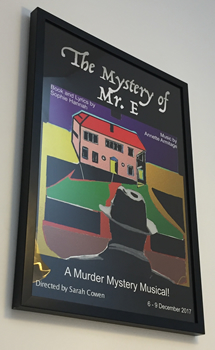 “As a writer of psychological crime fiction, it’s probably no surprise that I’m fascinated by grudges. Many of the greatest crime novels ever written are powered by grudges: Murder on the Orient Express is probably the most famous example,” she says. “But I’m also a keen reader of self-help books, and have been for many years. One day I was chatting to my sister, and I said I might write one of my own. Jokingly, I suggested that I might call it How to Be a Doormat. My sister said, ‘But you’re not a doormat—you’re someone who holds grudges.’ I said, ‘Yeah, I love my grudges—but there must be loads of books about grudges already.’ I looked on the internet, and there were none. Not a single one. I thought, ‘How can there not be a single book about such a universal aspect of human experience?’

“Then I remembered that, often, when I’d read self-help books, I’d thought, ‘This theory is wonderful, but there’s no hope of me following it—I’d have to give up my grudges, and I’m not doing that.’ I realized that my grudges were a wholly positive force in my life—they protected and inspired me, and made me feel nothing but happy. I started looking into the thinking around grudges and definitions of the word, and I found that my definition was totally different, and that all the received wisdom about grudges was totally, and provably, wrong. So, I thought: I’m going to do it. I’m going to write a self-help book about how to hold grudges in the right way, so that they enhance your life.

“I’ve also launched a podcast on the same subject (with guests including an existential psychotherapist, an emotional freedom therapist, and a witty poet who often writes about grudges).”

As if those projects haven’t kept her busy enough, Hannah is hard at work on her next books. 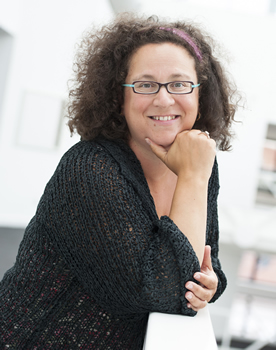 “Haven’t They Grown—my next contemporary thriller, about a woman who meets her former best friend after twelve years, and yet the friend’s two children haven’t aged at all and appear still to be five and three years old—is coming out in the UK next year,” she says. “I’m currently working on another non-fiction book and my fourth Poirot novel, both of which will be published in 2020.”

“I’m far less addicted to Twitter than I used to be,” she says. “I’m down to about fifteen minutes a day. I think it’s because I’m tired of hearing everybody’s political views, and I find it depressing to see how certain so many people are that they’re right about absolutely everything. I’m now addicted to podcasts instead. My two favorites are The Life Coach School with Brooke Castillo, and The Mastery Sessions with Robin Sharma.”

And as it turns out, writing books and poetry are not Hannah’s only talents.

“Years ago, I wrote a brilliant country song called ‘Don’t Leave Your Wife for Me.’ It would be perfect for a singer like Reba McEntire or Shania Twain to sing, but I have no idea how to get it to either of them,” she says. “If any of you knows them, please ask them to contact me!”