A Thriller Ripped From
Tomorrow’s Headlines 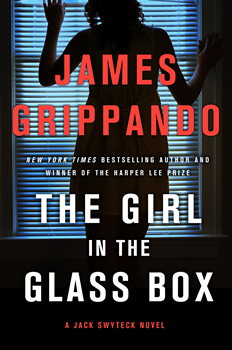 New York Times bestselling author James Grippando is back with his latest legal thriller, THE GIRL IN THE GLASS BOX. The novel, which marks the 25th anniversary of Jack Swyteck, Grippando’s iconic Miami criminal defense attorney, is both a thrilling page-turner and a story about love, family, and survival. As Kirkus Reviews observes, “Grippando is equally skillful at ratcheting up the tension and plucking at your heartstrings.”

Jack is at the heart of the nation’s immigration crisis, representing Julia Rodriguez and her young daughter, Beatriz, who fled the violence of El Salvador to seek asylum in the US. When Julia rejects her employer’s sexual advances, he calls the authorities. After US Immigration and Customs Enforcement (ICE) takes Julia into custody, Jack agrees to represent her. Only he can help her navigate the byzantine and often callous immigration system. But the looming threat of deportation is only the start of the trouble for Julia and Beatriz. The stakes become a matter of life and death when the most serious threat to their safety has followed them all the way to Miami.

According to Grippando, the novel’s fascinating legal premise comes from a 2014 landmark decision from the US Board of Immigration Appeals. The Board recognized that a woman may qualify for asylum in the United States if the government of her home country can’t or won’t protect her from domestic violence. The startling truth is that, in countries like El Salvador, nearly three out of every four acts of sexual violence take place in the victims’ homes. Yet the government refuses to prosecute a man who rapes and abuses his wife.

Adding to the victim’s plight, abortion in El Salvador is illegal in all circumstances, even in cases of rape. Some women who have had abortions after a sexual assault have been convicted of aggravated homicide. The punishment is a 30-year prison sentence, the same as for a gang member convicted of murder.

“The biggest challenge to Jack—and to me as a writer—was the fact that the law in this area is rapidly changing and developing,” Grippando says. Indeed, within days after Grippando completed the manuscript for THE GIRL IN THE GLASS BOX, then US Attorney General Jeff Sessions issued a ruling making it all but impossible for victims to gain asylum based on domestic violence.

As every experienced lawyer knows, certain misguided clients sabotage their own attorneys’ efforts. As the story unfolds, Jack discovers that Julia harbors dark secrets which sorely test his legal skills. Her complexity adds to the novel’s richness.

“I write legal thrillers, but my books have always been more than just thrills,” says Grippando. “My bad guys are never all bad, and my good guys are never all good. They have a past that makes you understand their contradictions, their flaws, and their motivations. They surprise you, too. The fact that Julia sometimes surprises even Jack is a huge plus for the storyline.”

When Grippando visits schools to talk to children about writing, he’s always asked, “What are your books about?” He never gets into plot but rather tells the kids, “My books are about relationships.” That answer fits THE GIRL IN THE GLASS BOX perfectly.

As the US Supreme Court once noted, an immigrant facing deportation stands to lose life and property and all that makes life worth living. “The national debate over immigration sometimes loses sight of these stakes,” Grippando says. “In this way, I think a novel may be the perfect vehicle to understand the crisis.”

Not that Grippando’s novels are “ripped from the headlines.” While staying on top of current events, he doesn’t retell the past but rather looks for trends and forces that are destined to collide in the future. Then he asks what he calls the most important question a thriller writer can ask: What if …?

“If I’m ripping anything from the headlines, it’s from tomorrow’s headlines,” Grippando says. “In the case of THE GIRL IN THE GLASS BOX, never has ‘tomorrow’ come so soon.”

Although Jack Swyteck is one of the most popular and enduring serial characters in the legal thriller genre, Grippando never intended the first Swyteck novel, The Pardon (1994), to start a series. In The Pardon, Swyteck was an ideological lawyer who defended death row inmates. Five standalone novels followed. But people kept asking, “What happened to Jack?” Why? Because the early Swyteck was an angry young man with lots of unresolved personal issues. Readers wanted to see Jack mature as a man and a lawyer. So Grippando brought him back in Beyond Suspicion (2002), where he introduced Jack’s irreverent and hilarious sidekick, former death row inmate Theo Knight, who plays a key role in THE GIRL IN THE GLASS BOX.

Jack has indeed matured. He’s married to an FBI agent, Andie Henning, who readers met in Got the Look (2005). Jack and Andie now have a daughter.

“People enjoy thrilling plots, but I believe it’s the evolution of the main characters and the ensemble cast that keeps them coming back to the series,” Grippando says.

Then there’s Abuela, Jack’s Cuban maternal grandmother, whom he first met as an adult and who plays a key role in THE GIRL IN THE GLASS BOX.

“The biggest surprise to me about the Jack Swyteck series is the reader response to Abuela,” Grippando says. “My guess is that so many of us, regardless of ethnicity, have a character like Abuela in our lives. Jack’s Cuban-American mother died in childbirth, so he was raised by his Anglo father and even more Anglo stepmother. When Abuela enters Jack’s life, she makes it her sole mission in life to give her grandson a crash course in Cuban culture, which leaves room for some heartwarming and comedic moments. So far, she gives him a C-minus.”

When not writing, Grippando serves as an adjunct professor at the University of Miami School of Law, teaching modern law and literature, covering everything from To Kill a Mockingbird to Bob Dylan’s 1975 protest song, “Hurricane,” about the controversial murder conviction of boxer Rubin Carter.

“I learn a lot from my students, but probably the most practical discovery I’ve made is that my pop culture references need updating,” Grippando says.  “Not a single student in my first class had ever read Mutiny on the Bounty or even heard of Fletcher Christian or Captain Bligh.”

Great news for readers: Jack Swyteck will be back in 2020 for novel number 16 in the series.