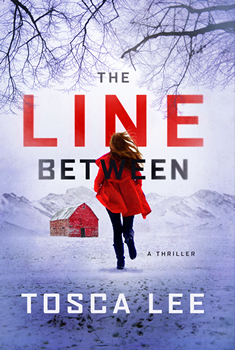 If today’s headlines give you goosebumps, you should read Tosca Lee’s newest action thriller, THE LINE BETWEEN, in which a cult cast-out becomes the only hope to save the United States from a deadly virus released from the melting Alaskan permafrost.

Wynter Roth is expelled from the doomsday cult in which she’s been raised. As she struggles to adjust to a world she’s been taught is evil, a mysterious outbreak of early-onset dementia spreads. The power grid and other support systems fail.

To Wynter, the cult leader’s dire predictions seem to be coming true. As people fall ill by the thousands, Wynter’s dying sister turns up at her doorstep in Illinois with a set of medical samples that could hold the key to the disease. Wynter must carry the samples to a Colorado scientist in hopes of stopping the virus, but threats pile on like snowdrifts, and success is far from guaranteed.

Action, conspiracy, romance: THE LINE BETWEEN has it all.

Alex Kava says it’s “everything you want in a thriller,” while Jonathan Maberry calls it “beautifully written and deeply unnerving.” Steven James says it’s “a nonstop thrill ride that will leave you breathless,” and K. J. Howe describes it as “an epic novel of depth and power . . . Brilliant.”

THE BIG THRILL caught up with Lee recently and learned that her road to 11 published novels has had a few twists.

“Dancing professionally was all I ever wanted to do,” Lee says, “until I tore a groin muscle and, during the following year of recovery, grew six inches.”

Although she continued to dance, a career in ballet was no longer possible. But writing was always in the background.

Even though Lee had won several contests, she never really considered the possibility of writing professionally until a talk with her dad about her favorite book—Marion Zimmer Bradley’s The Mists of Avalon—changed her mind. She told her father “how a great book is like a ride you strap into, hoping it’ll transport you somewhere magical or terrifying or romantic or to the past or future.”

When Lee told her father she wanted to write a book, he made her a deal: he’d pay her what she was set to make working as a bank teller that summer if she’d write full-time instead. Lee took him up on the offer and wrote her first novel, about the people who worshipped at Stonehenge in the Neolithic Period.

The writing process taught her a lot.

“In the late ’80s and early ’90s, before the internet, I devoured Writer’s Digest and books on writing, how to get an agent, and how to submit a manuscript,” she says. “I made many mistakes. A couple of years ago I found the rejection letter for that Stonehenge novel—and promptly died when I read, ‘Even after reading the 23-page synopsis, I am still not sure what this book is about.’ But the reader found it ‘oddly reminiscent of Clan of the Cave Bear,’ one of my favorite novels growing up. So I was like, ‘Woo-hoo!!! I am SO doing this again!’”

The next few years were filled with graduating, getting married, and working at Smart Computing Magazine. Lee spent nine years on another novel, which remains unfinished. “I learned from that experience to stop rewriting the beginning over and over and just get to the end already,” she says.

Mentors, Lee notes, have always been instrumental to her career. She studied under Daniel Mueller at the University of New Mexico, took classes from literary agent Donald Maass and author/story consultant Michael Hague, and hired editors to help polish her manuscripts. “I continued to do these things after my first, second… fifth, sixth, and seventh novels released,” she says. “I discovered ThrillerFest and have gone back again and again for more.”

Her successful three-novel collaboration with Ted Dekker, which kicked off in 2011 with Forbidden, also taught her a lot about both the collaboration process, and about herself.

Beyond the writing community, Lee says she’s inspired by “musicians, athletes, and stories of the tenacity and vision of people doing extraordinary things—or everyday things extraordinarily.” As examples, she cites the recent documentaries Dawn Wall, about freeclimbing the southeastern face of El Capitan, and Momentum Generation, about a group of professional surfers who shot to stardom in the 1990s.

As for the genesis of her latest novel, Lee says THE LINE BETWEEN is a combination of two different ideas from a list she presented at a meeting with her publisher in New York.

“The ancient disease emerging from the permafrost is real—a story I had read in the news and was really excited about,” she says. “The other idea of this young woman becoming exiled from a doomsday cult and trying to acclimate to life in a world she’s been taught was evil also interested me. My publisher said, ‘I love them both. Why not put them together?’”

Extensive research was necessary, particularly regarding the book’s science. Lee says she learned “scary stuff about microorganisms being released from melting permafrost and their viability even after tens of thousands of years, as well as how prion diseases [a group of rare progressive neurodegenerative disorders] work, and how difficult it is to test for them in living subjects or to sanitize surgical instruments using conventional methods. Stuff someone with OCD like me shouldn’t know.”

Her cult research was also enlightening. “Cults and their charismatic leaders get inside people’s brains in insidious ways,” Lee notes. “I know of people who have had to sort through significant spiritual and emotional baggage upon leaving. I always include notes in the back of the book for anyone interested in learning more.”

The cult leader in her story seems to have an answer for everything—a trait inspired by real-life cult figures such as David Koresh, who, as Lee points out, “was extremely well versed in the Bible, and could use scripture to back up nearly anything.”

Lee says she doesn’t try to advance any particular agenda in her work, other than telling the best story she can tell. “My personal beliefs no doubt influence my interests or certain creative decisions, but in general I find myself asking more questions than offering answers.”

As for what she hopes readers will take away from her latest novel, Lee’s answer is simple: “Enjoyment. Beyond that, I’m always encouraged when readers write to say that they felt understood or less alone, or more inspired, or that they learned something new that they thought about for a long time after finishing the book. I love keeping readers up at night.”

After THE LINE BETWEEN, its sequel, A Single Light, will release in September and takes place largely in Lee’s home state of Nebraska. “Not only was it incredibly fun to write, it contains one of my favorite new characters I’ve ever written,” she says. “I’m so excited to share him with you!”

Lee has plenty of other things to be excited about, too—for instance, the CW Network has bought her thriller The Progeny and its sequel, Firstborn, for development as a television series. And Lee just confirmed that Marlboro Road Gang Productions and Radar Pictures are developing The Line Between as a television series.

The future looks bright for this talented author.

Tosca Lee is the award-winning, New York Times bestselling author of the House of Bathory duology (The Progeny and Firstborn), Iscariot, The Legend of Sheba, Demon: A Memoir, Havah: The Story of  Eve, and the Books of Mortals series with New York Times bestseller Ted Dekker (Forbidden, Mortal, Sovereign). A notorious night-owl, she loves watching TV, eating bacon, playing video games and football with her kids, and sending cheesy texts to her husband.

You can find Tosca on her website, on social media, or hanging around the snack table.