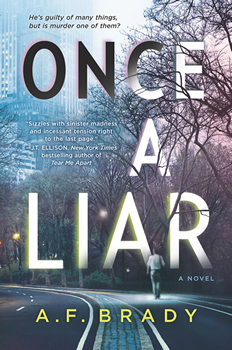 Did he kill Charlie Doyle? And if he didn’t…who did?

Peter Caine, a cutthroat Manhattan defense attorney, worked ruthlessly to become the best at his job. On the surface, he is charming and handsome, but inside he is cold and heartless. He fights without remorse to acquit murderers, pedophiles and rapists.

When Charlie Doyle, the daughter of the Manhattan DA—and Peter’s former lover—is murdered, Peter’s world is quickly sent into a tailspin. He becomes the prime suspect as the DA, a professional enemy of Peter’s, embarks on a witch hunt to avenge his daughter’s death, stopping at nothing to ensure Peter is found guilty of the murder.

In the challenge of his career and his life, Peter races against the clock to prove his innocence. As the evidence mounts against him, he’s forced to begin unraveling his own dark web of lies and confront the sins of his past. But the truth of who killed Charlie Doyle is more twisted and sinister than anyone could have imagined…

The Big Thrill caught up to A. F. Brady to gain some insight into her second thriller, ONCE A LIAR:

I hope readers will challenge their preconceived notions about human nature and people’s ability to change, and why forgiveness is so important in life.

ONCE A LIAR is told from the point of view of a sociopathic antihero, and I think so often we find the most villainous and disturbing characters as the antagonists fighting against the main character, and this book flips it around a little. The reader has the opportunity to see inside the head of a bad guy and develop an understanding (and maybe even sympathy) for his situation. Peter Caine is an unusual protagonist, and I think it’ll be refreshing and challenging for readers.

I discovered that writing dark and creepy scenes while you’re pregnant and can’t have a cocktail to take the edge off really makes it tough! I feel like this book gave me the opportunity to really challenge myself to change my own notions about who/what is good and who/what is evil, and how societal expectations have crammed us into people we may not want to be. I was both saddened and uplifted while I was doing the legal research and talking to lawyers in New York who helped me gain an insider’s understanding of the truth of the legal system. It’s rife with both good and evil…

I’m a psychotherapist by trade, and most of the characters in ONCE A LIAR are conglomerations of individuals I’ve worked with. Peter Caine is real. You probably know him…

James Frey because his voice is so raw and he truly doesn’t seem to care what you think. I have huge admiration for someone who has made peace with themselves. Chuck Palahniuk because, my god, he’s not afraid to write some incredibly sick stuff, and I just love how vivid his imagination can be. (Or is it imagination?) Gabriel Garcia Marquez, especially 100 Years of Solitude, because he’s the most intense storyteller and I imagine my way into impossible worlds when I read his work. I reread The Plague by Camus almost every year because it keeps me grounded, and Karoo by Steve Tesich because I get completely lost in that story and I love an unlovable narrator. 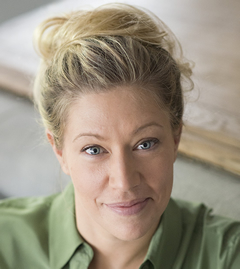 A. F. Brady is a NYS Licensed Mental Health Counselor born and raised in Manhattan, currently living in New York with her husband, their children and their dog. Her first novel, The Blind, (Park Row | Harlequin Books) was published in September 2017.
In addition to writing, she currently works as a psychotherapist in private practice where she works with individuals and couples. She also runs a professional organizing and design business based in the idea that mental health is affected by our home environments.

Brady has been working in the field of mental health since she was eighteen. She has worked in the psychiatric units of private hospitals, public mental health agencies, day treatment programs and private practices. She primarily worked with adults suffering from major mental illnesses (schizophrenia, bipolar disorder, etc.), and addictions to drugs and/or alcohol.

To learn more about A. F. Brady, please visit her website.