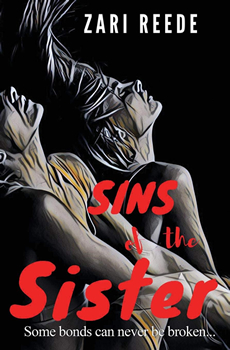 SINS OF THE SISTER is the sixth novel—and first thriller—from Zari Reede, a writing team consisting of authors Zoe Tasia and Minette Lauren. What started as a shared writing exercise grew into a professional partnership for the Texas-based authors, whose previous releases include the urban fantasy Blinked and the romance Daisy Dukes ’n Cowboy Boots (both released in 2017).

Lana Madison is a college-age woman searching for her twin sister, Dania. They have opposite personalities: one is shy, reserved, and always does the right thing; the other is outgoing, fearless, and pushes boundaries. But their sisterly bond moves past biology and crosses the threshold into the psychological realm. They share emotions and memories. These brief flashes of experience have driven Lana for the last three years as she seeks Dania and the men who abducted her. Lana views these snapshots as proof of life. They also provide clues that fill the gaps of her own remembrances from the fateful night Dania disappeared.

SINS OF THE SISTER is a classic thriller that keeps the reader involved as Lana navigates the dangerous world of human trafficking. It’s full of characters who might not be what they seem—that’s the thrill of a novel that keeps you guessing all the way to the monumental twist.

The authors recently took some time to sit down with The Big Thrill and answer a few questions about their latest collaboration.

How did you two meet? How was Zari Reede created?

Zoe Tasia: We met through our husbands and hit it off right away. Zari and Reede are two characters from my World of Warcraft account. Since I thought Zari was a cool name, I used it for a main character in another book, but when we decided to use it as our pseudonym I changed her name.

Minette Lauren: We did meet through our husbands, but it took a while before we realized we shared a passion for writing. Once we signed with our publisher, we started thinking of a name. It wasn’t easy. I liked Zoe’s story about familiars. Her character’s name was Zari. I had never heard of the name and loved it. My sister—who passed away just before we published—said she wanted to write under the name Freede. I liked Reede/read. It sounded good and I thought using one author name was better than using both our pen names.

How was Lana born?

ML: When Zoe and I started writing together, it was about getting motivated. We had no idea how addictive it would be. After I started the first book, Daisy Dukes ’n Cowboy Boots, a humorous West Texas romance, Zoe started the second story, Blinked, a zany urban fantasy. When it came my turn again I thought we could meet in the middle and write a mystery. I admit, shortly after we started writing I was paralyzed with the fear of not being able to do it well. It was difficult to keep everything straight, and then getting into the mind of such nefarious characters was challenging. Lana was random, just like all the books I’ve started. I opened my laptop with very little idea of what I would write, and then I imagined a scenario. That description got paired with a name, and details trickled into chapters, fleshing out the story as it grew from an ember into flames. I think Zoe is more of a plotter when it’s her turn to wield the pen.

ZT: I feel Lana’s character was established in the first chapter. She’s a woman with an obsession—one that has taken over her life and defines her to the point that she has lost sight of who she is.

ZT: Originally from Oklahoma, Lana Madison moved to Austin to attend the University of Texas. When her twin sister, Dania, vanished, Lana dropped out of school and joined the workforce to finance the search for her missing sibling. After consulting Ben Collins of Collins and Cooke Investigations, Lana was sponsored by the agency and became a registered private investigator. Since Mr. Collins’s retirement, Lana is now a full partner of the firm and specializes in missing persons cases.

What kind of research did you conduct regarding private investigators?

ML: I Google just about everything. I decided on this particular storyline because of a real incident that happened to me in Austin. I started SINS OF THE SISTER with our main character locked in the trunk of a car. I looked up details about safety releases, years, makes, and models. I’ve often made jokes about helicopters hovering over my house due to my browser history. Lucky for me, I have Zoe to head up detailed investigation.

ZT: Unfortunately, we didn’t know any private investigators. From what I gathered from my research, most of a PI’s work is conducted on the internet, so I don’t feel bad about following suit. Requirements needed to become a licensed private investigator differ from state to state. In fact, a few states do not require a PI to be licensed. So we had to make sure Lana qualified by checking the Texas Association of Licensed Investigators. We kept abreast of the laws and limitations of the field. However, Lana is a maverick and not one to let anything get in the way of her search for her sister. If this means bending laws, she would have no problem doing so.

What lessons have you learned in team writing?

ML: I have learned that killing what we believe are great scenes is sometimes what is best for the book. We have both experienced this painful extraction.

Lana is serial material. Any plans?

ZT: According to the Institute on Domestic Violence and Sexual Assault at the University of Texas, there are more than 300,000 victims of human trafficking in Texas. Like characters in our book, many of those preyed upon are approached via online sites and social media. I would love to grow the novel into a series drawing attention to this disturbing fact.

Writers extraordinaire, domestic goddesses, lovers of all furry things…
Zari Reede is a writing team consisting of Zoe Tasia and Minette Lauren. Both have an addiction to collaborative writing that rivals Oreo Double Stuffed cookies with fine champagne. Writing solo for years, they decided to engage in a writing exercise to strengthen their skills and enlighten their creative minds. It turned out to be a great venture and is still going strong today. Zoe lives in Houston, has two cats, two boys, and a priceless husband, who supports all her rebel dreams. Minette Lauren also enjoys living in Texas, has five dogs, one god-dog, three turtles, three parrots and a wonderful husband that thinks all the things she writes are golden…even if it is horse hockey. They are lucky in life, enjoying every day they can write and dream.